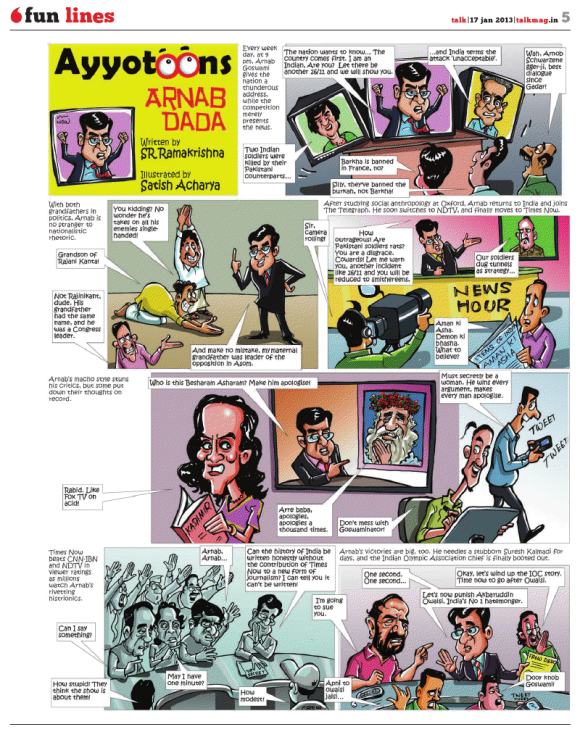 At the turn of 2012, the columnist Swapan Dasgupta nominated Goswami as his man of the year gone by:

“Arnab’s foremost contribution to the public discourse (at least the English language discourse which still sets the tone for others) is his unending search for what “the nation” wants to know.

“The definition of his imagined community is important. Hitherto, the media was reasonably modest in its inquisitiveness. Its rationale for demanding answers was invariably couched in terms of either ‘viewer interest’ or, at best, ‘the public interest’.

“In projection the ‘nation’ as the inquisitor — and I notice that even in rival channels ‘nation’ is fast becoming a substitute to the more passive use of the ‘country’ — Arnab has succeeded in doing something quite remarkable: he has successfully made ‘nationalism’ the core attribute for assessing public life.   This is a remarkable feat….

“In an environment where others were highlighting the values of cosmopolitanism, internationalism, liberalisation and oozing concern for the human rights of every extremist who sought the vivisection of India, Arnab re-popularised the validity of proud nationalism.

“For helping India recover this eroding inheritance, ‘the nation’ must be thankful to him. He has been the best corrective to the babalog media.”