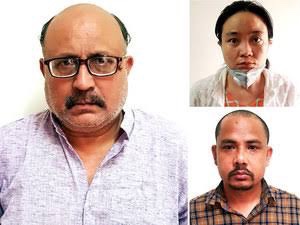 The Press Club of India has slammed the arrest of Delhi-based journalist Rajeev Sharma, allegedly for violating the official secrets act (OSA) by passing on “secrets” to the Chinese.

Below is the full statement of PCI.

“We are astounded to hear of the arrest of Rajeev Sharma, a well-known independent journalist of long standing and a member of the Press Club of India.

“This is on account of the dubious track record of the Special Branch. More generally also, the record of Delhi Police is hardly a shining one.

“On the basis of the statement of the police released to the media, we have no hesitation in saying that the police action is high-handed, and may be inspired by obscure or questionable considerations.

“In 2002, Iftikhar Gilani, a senior journalist with Kashmir Times was arrested on the trumped up charge of tracking the Army’s movements in Kashmir and keeping his so-called pay masters informed. He was thrown into Tihar jail for seven months where he was assaulted by other prisoners on the provocation of the authorities. Eventually, it was the Army’s intelligence that gave the lie to the bogus police case and Gilani had to be released. The poor part played by the magistracy was also brought out in that case.

“Subsequently, a Delhi journalist, S.M. A.Kazmi who wrote for Iran’s official news agency, was also arrested for playing in the hands of the Iranian secret service. His family also was made to run from pillar to post- all to no avail. Eventually it became clear that the whole case was bogus and the journalist was freed.

“Acting on a political basis, JNU and Jamia scholars such as Kanhaiya Kumar, Umar Khalid and others were picked up and Kumar had to undergo a jail term in Tihar.

“Of late, Delhi Police, including its Special Branch, have made preposterous arrests under the lawless law called UAPA in which the word of the government is enough to keep an innocent person behind bars for long periods. These have happened in matters relating to anti-CAA protests and the carefully designed communal killings in the so-called February 2020 riots in northeast Delhi.

“Rajeev Sharma‘s six-day police remand, after his arrest on September 14 under the Official Secrets Act, evidently for relaying defence-related information to China, also appears mind-boggling. Sharma wrote on strategic affairs and may well have accessed routinely over-classified information on the Internet that is in the public domain.

“Eventually, the matter will reach the magistracy and probably the higher levels of the judiciary. It is our demand, however, that in all cases of arrests of journalists anywhere in the country, the police must be required to inform the Press Council of India as well as the self-regulatory body of the broadcast media on an immediate basis, and provide pertinent details so that a defence may be possible to construct.”

Below is the full text of the press release issued by the “Special Cell” of Delhi Police on the arrest of Rajeev Sharma.

➢ ONE CHINESE LADY AND HER NEPALESE ASSOCIATE ALSO ARRESTED FOR PAYING HIM LARGE AMOUNTS OF MONEY ROUTED THROUGH SHELL COMPANIES.

➢ SHELL COMPANY WAS BEING JOINTLY OPERATED BY CHINESE AND NEPALESE NATIONALS FOR FUNDING THE ESPIONAGE OPERATION.

The Special Cell has arrested one Rajeev Sharma s/o Lt Sh. Rattan Lal Sharma, Age 61 years, a journalist found working for Chinese intelligence officers. During the search of the house of Rajeev Sharma in Pitampura, New Delhi one laptop, some confidential documents related to Indian Defence department and some other incriminating documents were recovered & seized.

Further, during his police custody remand, one Chinese lady Qing Shi and her Nepalese partner Sher Singh @ Raj Bohra have been also arrested who were found supplying him huge amounts of money routed through Hawala Channels for conveying sensitive information to Chinese Intelligence.

A few days back, a secret input was received from an Intelligence Agency that one Rajeev Sharma R/o SG-2, St. Xavier Apartment, Pitampura, New Delhi is having links with Foreign Intelligence Officer and he has been receiving funds from his handler through illegal means & Western Union money transfers platform for conveying sensitive information, which concerns National Security and Foreign relations.

On interrogation, Rajeev Sharma has disclosed his involvement in procurement of secret/sensitive information and further conveying the same to his Chinese handlers namely Michael and George, based in Kunming, China, through different digital channels. He further disclosed that he was about to send/convey these recovered secret documents to his handlers. In the past also, he had sent several documents in the form of reports to his handlers and got a handsome remuneration for the same.

During the period of 2010-2014, he wrote a weekly column for The Global Times, widely known as a mouthpiece of the Chinese govt. Observing those columns, one Chinese intelligence agent named Michael from Kunming city of China contacted Rajeev Sharma through his LINKEDIN account and invited him to Kunming China for an interview in a Chinese Media Company.

The entire trip was funded by Michael. During, the meeting, Michael and his junior Xou asked Rajeev Sharma to provide inputs on various aspects of India-China relations. Between, 2016 to 2018 Rajeev Sharma was in contact with Michael and Xou.

He was tasked to provide the information/inputs on issues like Indian deployment on Bhutan-Sikkim-China tri-junction including Doklam, the pattern of India-Myanmar military co-operation, India-China boundary issue etc. Subsequently, Rajeev Sharma had meetings with Michael and Xou in Laos and Maldives once each and gave briefings on the above-mentioned topics.

Besides these visits, Rajeev Sharma was also in contact with Michael and Xou through e-mail and social media.

In January, 2019, Rajeev Sharma came in contact with another Kunming based Chinese entity George. He visited Kunming China via Kathmandu and met George. George was introduced as a General Manager of a Chinese Media Company.

During the meeting, George asked Rajeev Sharma to write/inform about Dalai Lama related issues. For this Rajeev Sharma was offered 500 USD per article/information. George told Rajeev Sharma that they will send him money through his company’s sister concern based in Mahipal Pur, Delhi being operated by a Chinese lady Qing.

Rajeev Sharma has received more than Rs. 30 Lacs from George in about 10 instalments from January 2019 to September 2020 for the information provided by him. Rajeev Sharma had further meetings with George in Malaysia and again in Kunming City, China.

During investigation, it is revealed that shell companies are being operated by foreign intelligence to transfer funds to Rajiv Sharma. It is revealed that Chinese nationals namely Jhang Chang and his wife Chang-li-lia were running the companies MZ Pharmacy and MZ Malls, under fake names Suraj and Usha.

They are both presently in China and on their behalf, another Chinese lady Qing Shi and one Raj Bhora, a Nepali National (both directors of MZ Pharmacy) are presently operating the business from Mahipalpur. Both, Qing Shi (age 30 yrs) and Sher Singh @ Raj Bohra (age 30 yrs) have also been arrested. Further investigation with respect to the Chinese shell companies based in Mahipalpur is in progress.

Forensic analysis of seized mobile phones and laptops is being conducted to unearth the entire network and conspiracy in this case. Identities and roles of other foreign nationals involved in the conspiracy are also being ascertained

Further investigation is in progress.