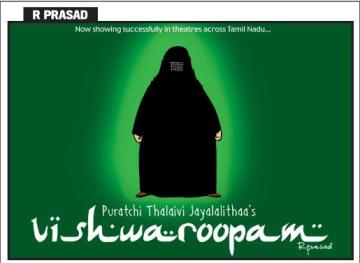 So, young Indians cannot tell their friends in what they like on Facebook, without being “pre-screened” by Harvard types (or hauled into a police station by Shiv Sena goons). So, bloggers cannot publish their “online private diaries” without the sword of 66(A) hanging over their heads.

Or his TV show.

So, TV stations cannot show protests without threatened by the information and broadcasting ministry (or corporate titans). So, newspapers cannot report what their reporters see without being told that the tap of government advertisements could be turned off.

So, M.F. Husain cannot die in his own country. So, A.K. Ramanujam‘s interpretation of the Ramayana hurts somebody.

So, Kamal Hassan‘s new film can be banned by a government run by a former film actor.

Sometimes, you do have to remind yourself it is a free country, don’t you?