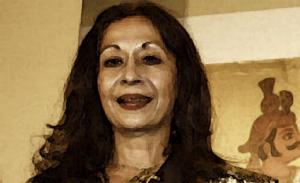 The columnist Tavleen Singh has just penned what she calls her “political memoirs”.

Titled Durbar (Hachette, 324 pages, Rs 599), the book charts Singh’s view of the corridors of power in Delhi from the inside out—from Indira Gandhi‘s Emergency in 1975 to her assassination in 1984; from Rajiv Gandhi‘s rise to his downfall and death in 1991.

The book jacket describes how Singh, at various times a reporter for The Statesman, Delhi; The Telegraph and Sunday, Calcutta; The Sunday Times, London:

“observed a small, influential section of Delhi’s society—people she knew well—remain strangely unafffected by the perilous state of the nation…. It was the beginning of a political culture of favouritism and ineptitude that would take hold at the highest levels of government, stunting India’s ambitions and frustrating its people well into the next century.”

In chapter 14, titled Euphoric Early Days and a Plot, Singh chronicles throws light on how her friendship with Rajiv’s window Sonia Gandhi waned—and the role played by a 1986 profile of the current Congress president in India Today magazine.

By the middle of 1986, my relations with M.J. Akbar had become so fraught that I decided I was better off going freelance. I was writing regularly by then for the Sunday Times, London, which brought in more money than I earned at the Telegraph.

I came to an arrangement with Aroon Purie, owner and chief editor of India Today, to do some freelance work for him as well and with a considerable degree of pleasure sent Akbar my resignation. His tantrums and sulks had now become so routine as to make constant difficulties for me professionally….

So it was that I happened to be in the India Today office on the afternoon the news came that someone had tried to shoot Rajiv Gandhi when he was visiting Mahatma Gandhi’s memorial, Rajghat, on 2 October 1986. The failed assassin was a twenty-four-year-old Sikh called Karamjit Singh, who was such an amateur that he used a country-made pistol as his weapon….

When I heard that Sonia had been with Rajiv at Rajghat, I called her to find out what had happened. She said that what had upset her most was that when they heard the shots the first people to duck were Rajiv’s new and supposedly highly trained bodyguards from the special protection group (SPG).

I must have mentioned our conversation in the India Today office that afternoon because immediately afterwards Aroon Purie summoned me to his room to ask if I could do an interview with Sonia Gandhi.

He said that people were blaming her for the negative stories that were beginning to pollute the atmosphere around Rajiv and everyone was curious about what kind of person she was and whether she really controlled the prime minister as people said she did. Although she went everywhere with the prime minister nobody knew anything about her at all.

How did she spend her days?

What did she think of India?

I called Sonia and told her that India Today wanted to do an interview with her and emphasised that her image was really bad and that it might help her to give an interview and clarify some of the things that were being said about her.

I told her that she was being blamed for interfering in government affairs and such things as throwing Arun Nehru out of the circle of Rajiv’s closest advisors…. She listened in silence and remained silent for a few moments before saying that she would check with the prime minister’s media managers and see if they thought she should give an interview to India Today.

They did not think it was a good idea. So we agreed to do an interview disguised as a profile and that only Sonia and I, and of course India Today, would know that the profile was done with her cooperation. I asked her all the questions that Aroon wanted me to and produced a profile that was so anodyne that Aroon said, ‘I don’t mind being considered a chamcha of Rajiv Gandhi, but of Sonia…’

I pointed out that I had said right from the start that I would not be able to say anything negative about her since we were doing the profile with her cooperation. Aroon was unconvinced and said that the very least we should do was put in the things that people were saying about her. He suggested that we put some bite into the piece by getting my colleague Dilip Bobb to work with me so that if I had problems with Sonia afterwards I could put the blame on Dilip.

So on the cover of the 15 December 1986 issue of India Today there appeared a profile titled ‘The Enigmatic First Lady of India’.

I am going to quote here the first two paragraphs and admit that the writing of them had more to do with Dilip than me. My contribution was to provide information about Sonia’s likes and dislikes, her friends and her life as the prime minister’s wife:

Had fate – in the form of assassins’ bullets – not intervened, she would have probably been quite content to linger in the shadow of her formidable mother-in-law, her assiduously protected privacy undisturbed by the fact that she belonged to the most famous family in the land. But destiny – and dynasty – willed otherwise. Unwarned, Sonia Gandhi was suddenly pitch-forked into the position she would have least wanted – India’s First Lady.

It is, as the last two years have painfully revealed, a role she is not comfortable in. Compared to the relaxed style of her debonair husband, she appears awkward and wooden. Though impeccably attired and carefully groomed, her face, framed by luxuriant chestnut hair, is an immobile mask. Perhaps deliberately, her public personality has given her the image of a mere ceremonial appendage to the Prime Minister. She is not a Lalita Shastri, but neither does she seem cut out to be Nancy Reagan or a Raisa Gorbachova. And the fate of someone who falls between two stools is not a happy one.

The article went on to charge Sonia with being the power behind the throne ‘plotting the downfall of opponents, through cabinet reshuffles (she didn’t trust Arun Nehru) and advising her husband on everything from the Kashmir coalition to Pepsi Cola’s entry into India.’

The profile was not flattering but it was not as bad as it could have been. Considering how much vicious gossip there was about the Quattrocchis by then, the piece was not unfair. There was only an illusion to her friends using her name when they threw their weight around Delhi’s drawing rooms and government offices. This was mentioned in passing.

So, when I called Sonia to find out what she thought of the profile I did not expect the frosty response I got.

I asked her if she had seen the profile and what she thought about it, and I remember being surprised by the icy tone in which she replied that she did not think she was like the person I had described in the profile. In what way, I asked, and she mentioned the reference to her friends using her name.

I said, ‘Look, Sonia, there are people using your name. I don’t want to give you details over the phone. But let’s have coffee and I will tell you exactly what is going on and who is doing what.’

We agreed to meet the next day or the next, but an hour before our scheduled meeting Madhavan, her personal assistant, called to say that Mrs Gandhi was unable to keep our appointment as she was accompanying the prime minister to Kashmir. He had been instructed to tell me that she would call when she returned to fix another time.

Some weeks later I wrote to her to offer condolences on her father’s death and got a polite handwritten reply in her neat, carefully formed handwriting. My New Year’s card in January 1987 was not written by hand and signed by both of them as it was the year before. It came from the prime minister’s office and was formally signed by Rajiv Gandhi.

I had been dropped.

B.G. Verghese on the declaration of Emergency