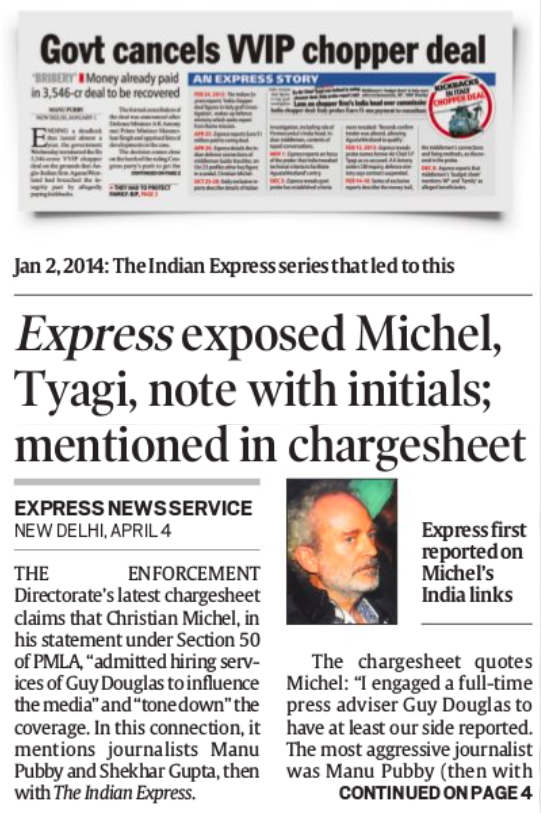 The Indian Express which broke the AgustaWestland helicopter scam in 2013 and added to the UPA’s mountain of scandals from which Narendra Modi pounced to power, finds itself being bizarrely accused by the BJP regime of toning down coverage.

Manu Pubby, then with the Express, was first to report that former air chief marshal (retired) S.P. Tyagi was bribed to swing the Rs 3,546 crore chopper deal and that he tweaked the tech specifications to help the Anglo-Italian firm, AgustaWestland.

The deal entailed the supply of 12 state-of-the-art choppers to the Indian Air Force to ferry VVIPs. The accusation was that a complex web of middlemen, fixers, officials were at play and kickbacks of 51 million euros was involved.

On the basis of the Express reports, the deal was first frozen and then cancelled in January 2014, but given the Italian connection, the BJP made much of it going into the 2014 elections, with their eyes fixed on 10, Janpath.

Eventually ex-air chief Tyagi was arrested and released. And Christian Michel, the alleged middleman, was extradited from Dubai last December. 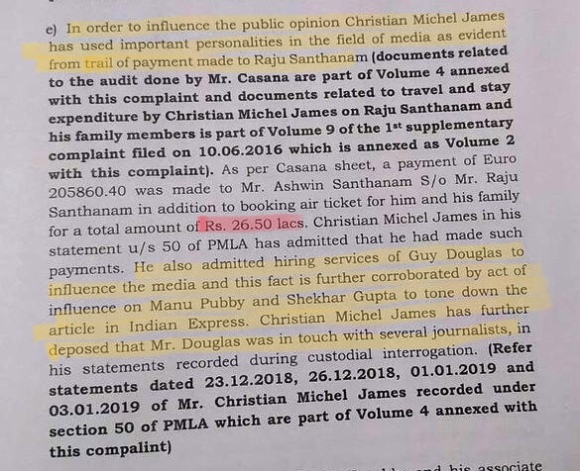 But on page 48 of the third chargesheet filed by the Enforcement Directorate, the attack dog of the Prime Minister’s Office (PMO), Express finds itself under scrutiny even while its reports form the “spine of the chargesheet”, as the paper says.

“I engaged a full-time press adviser Guy Douglas to have at least our side reported. The most aggressive journalist was Manu Pubby (then with The Indian Express)…Guy Douglas’s first task was to meet Manu Pubby and see if he was willing to listen to our side of the story.”

# It is perfectly all right for a company or a middleman to hire a public relations person or image consultant to deal with the media.

# It is perfectly all right for individuals and organisations at the receiving end of media coverage to seek to have it played down.

# It is perfectly all right for a reporter or an editor or a newspaper, individually or together, to speak to or hear out a spokesman for the aggrieved party.

# And it is perfectly all right for a newspaper or a news channel or a website to refashion its coverage if it is convinced of the other side.

But, by including Michel’s laughable claim as part of its chargesheet ahead of an election, ED darkly suggests that something is not kosher, as if Express was hiding something (wink, wink) when in fact the Express coverage resulted in the cancellation of the deal.

The Express report (above) of the ED chargesheet incorporates some of these elements.

What more did ED expect The Indian Express to do: lead it into Sonia Gandhi‘s drawing room where she is counting the cash and Robert Vadra is stroking the cat? 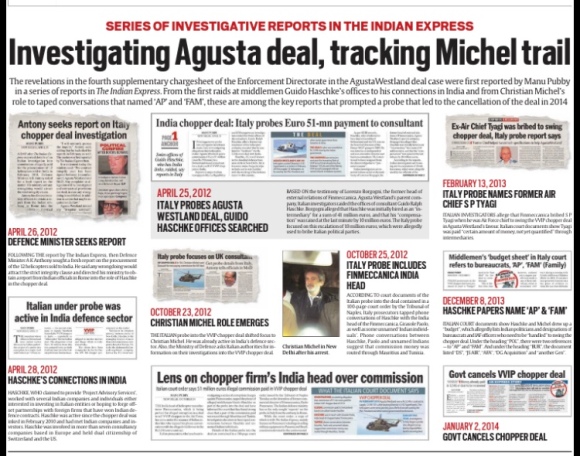 Shekhar Gupta, who was editor of The Indian Express at the time, has issued the following statement.

“The claim in the Enforcement Directorate chargesheet against Christian Michel, a key suspect in the AgustaWestland VVIP helicopter deal scam, that Michel had admitted to hiring the services of a person named Guy Douglas to influence Shekhar Gupta to tone down an article in The Indian Express, is 100% untruth, laughable and utterly preposterous.

“The truth is the exact opposite. The Indian Express, under the leadership of Editor-in-Chief Shekhar Gupta, broke the story first, was at the forefront of the media investigation into the AgustaWestland VVIP helicopter deal scam and was widely commended for its coverage.

“The timing of the lie by an alleged middleman, extradited into the custody of government agencies as an eventual outcome of the media investigation, raises deep suspicions about its motive.”

Not surprisingly, The Economic Times, where Manu Pubby now works, has no mention of the journalists figuring in the ED chargesheet.

Back in February 2013, when Manu Pubby broke the Agusta Westland story, it came in for praise from the paper’s owners.

Manu Pubby himself recorded a small video, which was put up on the paper’s website.

But when delegitimisation of the media is a full-time activity for parties and politicians, anything, it seems, goes if it can fetch a few brownie points on brain-dead TV in a hot political season.

“It is surprising that such charges (not backed by any proof of consideration) were approved by the Enforcement Directorate’s legal advisor.

“The chargesheet hints of a consideration without providing any proof. Quite apparently, its purpose is to malign the media by feeding the stereotype of Editors and media being corrupt and biased.”