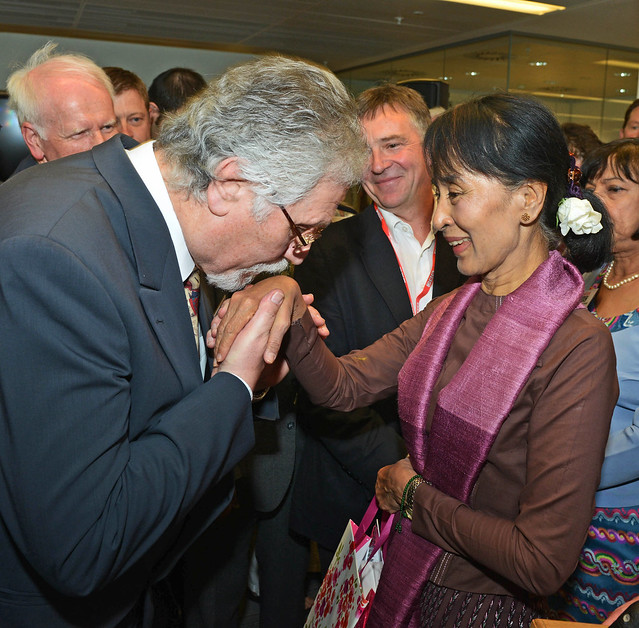 As her four-day visit to India, the first in 25 years, winds down, Aung San Suu Kyi has a series of interviews in magazines and on TV stations.

In an interview with Pranay Sharma in Outlook* magazine, the Burmese leader whose only window to the world in the long years of house arrest was the radio, talks of her love affair with the medium.

Radio used to be your only link with the outside world during your detention. But now that you are out in the open and find other options like the internet, TV, mobile, etc, does radio still have a special place?

Yes, I think it is special. Because the thing about the radio is that you listen very carefully. And years of listening to the radio has been a good training for me. You learn to recognise nuances that otherwise you wouldn’t.

Would you recommend that to the younger generation?

I think so. Listening is a very good thing. I have found that very few people really listen.

On the first day of her visit to Britain in June 2012, Aung San Suu Kyi visited the BBC studios and met the staff of the BBC Burmese service:

“Because of the BBC I never lost touch with my people, with the movement for democracy in Burma and with the rest of the world…. I feel that the BBC World Service is not as versatile as it used to be – or perhaps I’m not listening at the right times. There used to be so many different programmes, and every time I listen to it now, it’s news and commentaries. I miss the other old programmes… Bookshelf, Just a Minute, and so many others which I don’t seem to hear now…”