For a paper which turns its nose at news about the rest of the media, The Times of India has a strange item on its business page, news of the mobile phone entrepreneur turned member of Parliament, Rajeev Chandrasekhar, evincing some interest in Ramoji Rao‘s Eenadu television chain in Andhra Pradesh.

The ToI report comes a day after a Business Standard report that Network 18 was in the midst of merger talks with Eenadu. There has been plenty of market buzz that Mukesh Ambani‘s Reliance Industries has been more than interested in Eenadu through its subsidiaries and friends like Nimesh Kampani. 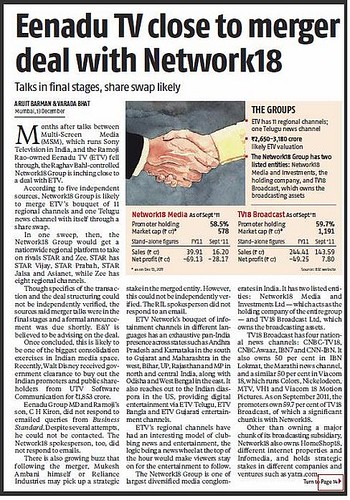