Narendra Modi‘s allergy for unscripted media interrogation is evident from his all-too-few interactions with professional journalists, not propagandists and actors, and the BJP government’s increasing opacity with official data.

There are those few minutes with Karan Thapar in 2007 (above) before he felt an urgent need for a glass of water. Then there was the sight of anchors being made to sit at his feet in a campaign bus.

But what of foreign journalists, those whom he meets in person, not those whom the Prime Minister’s Office emails answers typed out by some faceless, biometric-scanned, Aadhaar-linked-to-PAN bureaucrat?

Lionel Barber, the well-regarded Editor of the world’s top business newspaper Financial Times from 2005-2020, met Modi twice, once in 2013 when he was Gujarat chief minister and then in 2019 when he had been PM for five years.

Barber, who demitted office in January this year, recounts those meetings in his new book The Powerful and the Damned (Penguin). 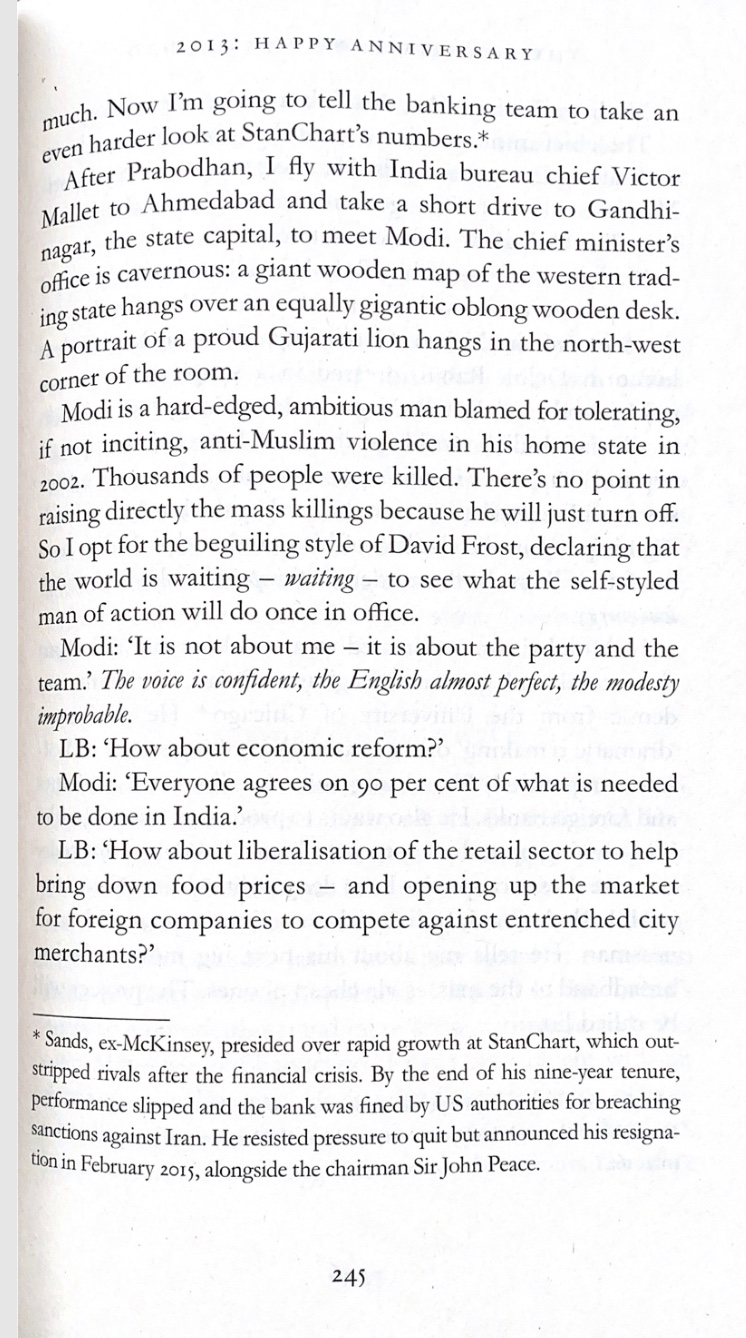 Of the first meeting (with FT Asia bureau chief Victor Mallet in tow) Barber writes, Modi was a lot sharper than Rahul Gandhi, whom he also met on the trip and calls him a hard-edged, ambitious man blamed for “tolerating, if not inciting” anti-Muslim violence in 2002.

Modi: “Everyone agrees on 90 per cent of what is needed to be done in India.”

Barber: “How about liberalisation of the retail sector to help bring down food prices–and opening up the market for foreign companies to compete against entrenched city merchants?”

Lionel Barber’s second meeting with Modi is in 2019 (with Delhi bureau chief Amy Kazmin in tow). Barber comes away from it and records that there was “still an edge of menace about the man who, lest we forget, had his finger on a nuclear button”.

“His answer to my first question about agricultural reforms takes the best part of 15 minutes.

“Every now and then, he stares at me, checking whether I have absorbed his message.

“The earlier smiles have disappeared.

“On departure, Modi hands me an envelope and urges me to open it. I assume it’s a copy of the official snapshot on arrival today. In fact, the envelope also contains official photographs of our first meeting in Ahmedabad.

“A touching memento, but also perhaps a gentle reminder: we have you on our files.”