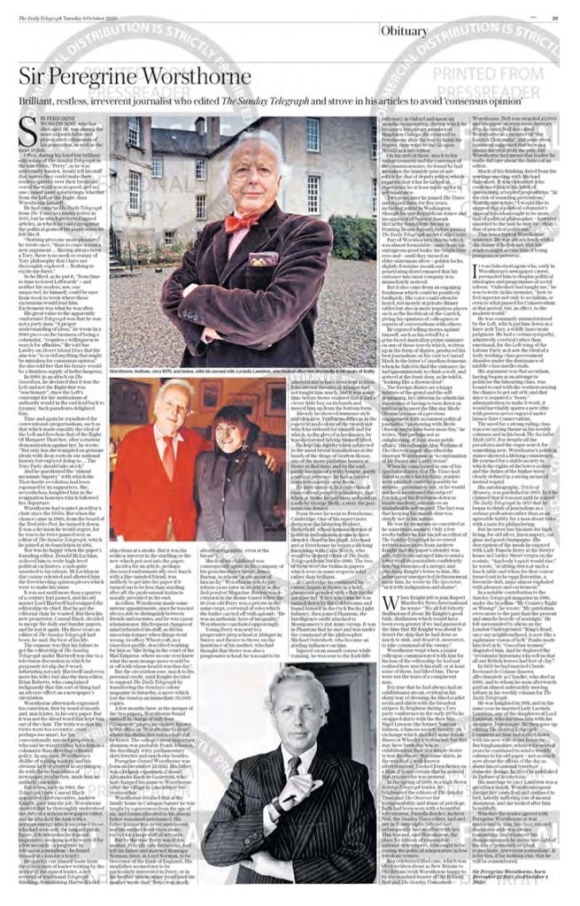 Peregrine Worsthorne, the former Editor of The Sunday Telegraph, London, passed away recently.

“Another charming and eloquent editor of my acquaintance, Sir Peregrine Worsthorne, who was briefly editor of The Sunday Telegraph, has been in the news. “Perry”, whose column was once essential reading for Conservative Party members, passed away last week, aged 96.

“Perry considered himself a maverick intellectual, and arrived in Argentina after the Falklands War but was denied the interview he sought with the country’s new democratic president, Raul Alfonsin. The Sheraton in Buenos Aires was then brimming with 500 foreign journalists.

“I was then on the Daily Mail, whose editor, David English, sent me back to Argentina with instructions — as always — to get the first exclusive interview with Alfonsin. Thanks solely to the magic wrought by the Indian ambassador, Lakhan Lal Mehrotra, Alfonsin was warm and open when we talked for 90 minutes at the Casa Rosada.

“Perry wrote a long article explaining that the reason Alfonsin had granted an interview to an Indian reporter of no great consequence (very true) was because the president had wanted to be kind to a third world country.

“I passed on Alfonsin’s pro-Indian sentiments to Mehrotra, who said quietly, “Let me see what I can do”. Shortly afterwards, Alfonsin was invited to be chief guest at the Republic Day Parade in Delhi.”

The Times, London, has an equally anusing anecdote of Worsthorne.