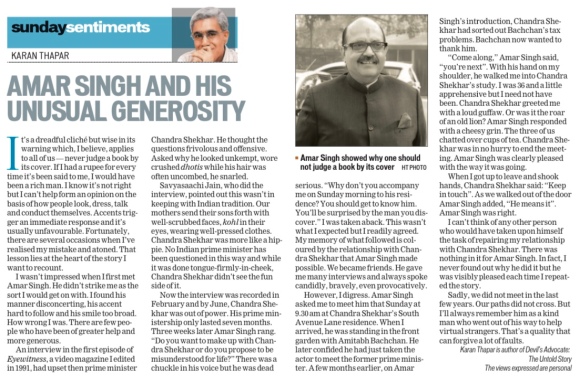 Never speak ill of the dead, maybe, but a week after his death, Amar Singh would go down in most people’s books as a fixer, as an operator, whose chief asset was an enviable (and enjoyable) collection of audio and video CDs—and a PABX machine which recorded every call.

But, in Delhi, a city of upper classes, lower classes and middlemen, those are salient skills.

In his column in the Hindustan Times, the TV interviewer Karan Thapar pays an unusual tribute to the “unusual generosity” of Amar Singh, for rescuing his relationship with former prime minister Chandra Shekhar.

“An interview in the first episode of Eyewitness, a video magazine I edited in 1991, had upset then prime minister Chandra Shekhar. He thought the questions frivolous and offensive.

“Asked why he looked unkempt, wore crushed dhotis while his hair was often uncombed, he snarled.”

The interview, done by Savyasaachi Jain, was recorded in February and by June, Shekhar was out of office.

“Three weeks later Amar Singh rang. “Do you want to make up with Chandra Shekhar or do you propose to be misunderstood for life?”

“There was a chuckle in his voice but he was dead serious. “Why don’t you accompany me on Sunday morning to his residence? You should get to know him. You’ll be surprised by the man you discover.”

Let the record show that Amar Singh sat on the board of Hindustan Times before it went public. HTV, owned by HT, produced Thapar’s monthly video magazine Eyewitness.