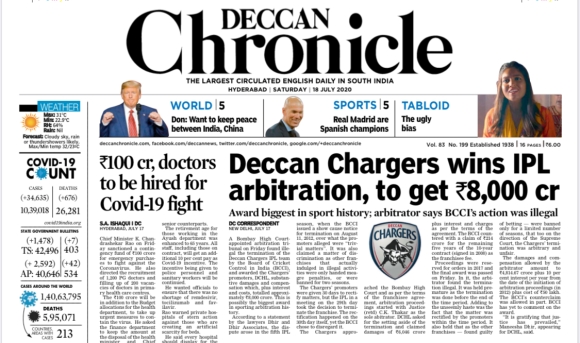 Deccan Chronicle, Hyderabad’s oldest and biggest English newspaper, has been under the pump for quite some time now, but the Board of Control for Cricket in India (BCCI) has provided a windfall boon for the premature termination of its IPL franchise.

After a fantastic Initial Public Offering (IPO) in 2004 that took its stock price to nearly Rs 1,000 from an issue price of Rs 165, it had been all downhill for DC as its flamboyant owner Tikkavarapu Venkattram Reddy took the route of Vijay Mallya.

Like Mallya, Reddy grew his ponytail into the celebrity pages.

Like Mallya, Reddy became a loud spender, splurging on cars and other showpieces.

Like Mallya, Reddy picked up an IPL team, the Deccan Chargers.

Reddy even made it to India Today‘s list of India’s most powerful people in 2008, but as with all crash-and-burn stories, Reddy’s ambition got ahead of him.

Expensive launches of Deccan Chronicle editions in Bangalore, Chennai and Kerala; the launch of a business paper Financial Chronicle; competition from The Times of India; the acquisition of The Asian Age under M.J. Akbar‘s advice; printing the International Herald Tribune in India, all ate into the company’s books.

When Deccan Chronicle failed to furnish a bank guarantee of Rs 100 crore from a nationalised bank to the BCCI in 2012, the cricket board cancelled its Deccan Chargers   IPL franchise, six years ahead of schedule.

The discovery of the bank fraud saw the paper’s assets being attached, its chairman being raided, and the paper virtually changing management at the behest of its 37 lenders, which included Canara Bank and Andhra Bank.

Reddy and his associates were briefly arrested in 2015.

Magically, Venkattram Reddy’s name continued to adorn sections of the newspaper. (His father T. Chandrasekhar Reddy was a Congress MP.)

“The Deccan Chronicle is as integral a part of Hyderabad as the Charminar. Deccan Chronicle was conceived by three friends — a journalist Theodre La Touche, an advocate, B. R Chari and Sarojini Naidu’s son, a homeopath, M.N. Jaisoorya. They sold the idea of an “everybody’s paper” to Mr Rajagopal who supplied papers to the Nizam’s government Press. Thus was born the Deccan Chronicle in 1938.”

In 2017, the National Company Law Tribunal approved the resolution plan submitted by Kolkata-based Srei group, one of the 37 lenders.

The Kanorias who run Srei, took control of Deccan Chronicle, appointed its own directors which included journalist and trade union leader Sabina Inderjit, and brought in Aditya Sinha as editor to replace M.J. Akbar’s (and Reddy’s) appointee, A.T. Jayanti.

The Bangalore and Kerala editions were closed recently.

Now, suddenly, but the BJP-controlled BCCI has handed DC a manna from heaven. And the paper has much to celebrate because the arbitration amount is magically the same amount it owes lenders.

If BCCI pays, that is.