In Delhi, Editors living in farm houses are a benchmark for #PannaPramukhs still aspiring and perspiring to clamber up the greasy totempole.

Sainik Farms has a number of #EditorialWarriors. A super-expensive mansion on Malcha Marg in Delhi’s diplomatic hub, allegedly owned by a “reporters’ editor”, has kept tongues wagging for years and even prompted a magazine cover.

In several state capitals, journalistic reputations are built on the size of subsidised accommodation wangled from the government—or flats and plots extracted for journalists’ associations and co-operative societies. 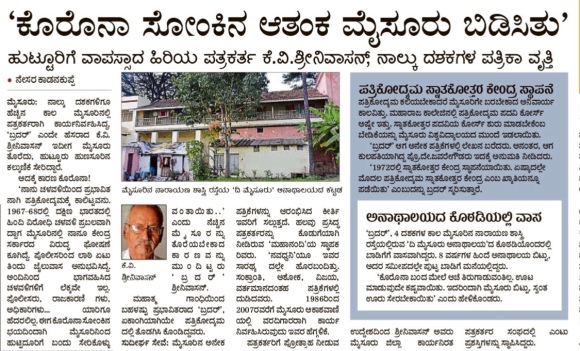 Today’s Praja Vani, the Kannada daily from the Deccan Herald group, carries a profile of K.V. Srinivasan, a reporter and Editor in Mysore, who has called time on a 53-year career following COVID, and is going back to his home village.

Mr Srinivasan, also known as “Brother” in the fraternity, was the launch Editor of two small Kannada dailies, Mahanandi and Navadhwani. He worked in a number of other local publications, Sankranti, Ashoka, Vijaya and Varthaman.

He was a reporter for All India Radio (AIR) for 21 years, and was largely responsible for a campaign that resulted in the University of Mysore starting a post-graduate course in journalism in 1972.

He set up eight awards for working journalists in the local association.

Here’s the catch: for 43 of his 50 years in journalism, the Editor, a practising Gandhian, lived in a rented room at ‘The Mysore Anathaalya’, an orphange in the City.

COVID has forced Srinivasan to go back to his home village in Kalkunike, in Hunsur, 45 km from Mysore—to a real farm house, not the sort fancied by fixers and operators.