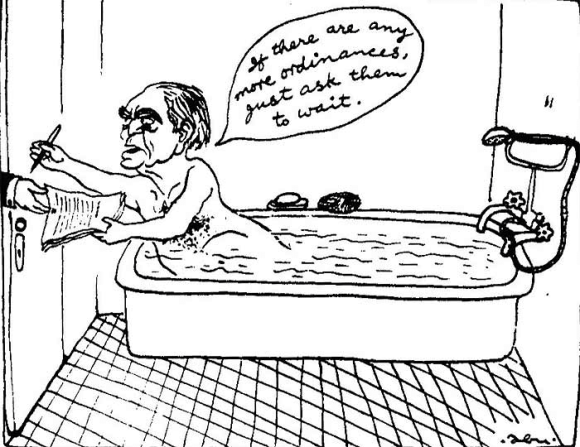 The Emergency of 1975 is in danger of becoming a cliche, pulled out with rhetorical flourish around June 25 each year to remember Indian democracy’s darkest 21 months.

Ditto, the censorship of the media during the Emergency.

The classic cartoon by Abu Abraham (above); and the blank editorials of the The Indian Express (below) are easily invoked, as is L.K. Advani’s quip that when it was asked to bend, the media crawled.

But after that, what?

What else happened to the media during the Emergency that makes it so portentous, that we should be wary about?

In a chapter titled ‘The Media Muzzled’ in her 2015 book The Emergency (Penguin Viking), the Indian Express journalist Coomi Kapoor shows how things took a turn for the worse for the media, after I.K. Gujral was replaced as information and broadcasting minister inside 24 hours of the President’s proclamation.

Vidya Charan Shukla, who took over, summoned newspapers editors in Delhi and told them in no uncertain terms that the government would not tolerate ‘any nonsense’, and that no dissent or protest would be permitted.

Shukla brought in a police officer K.N. Prasad as his officer on special duty (OSD) to keep tabs on what was happening in the media and to keep him informed. Prasad, in turn, requisitioned 14 IPS officers for the purpose.

Censorship was imposed under Rule 48 of DIR (Defence of India Rules).

Although technically this related to news dealing with security issues and public order, its guidelines barred just about anything that could be construed as against the government or the rulers.

Censorship disallowed the guidelines of censorship from being published.

So, here’s is what else happened during censorship.

No news of opposition leaders. The names of people arrested were also not to be published.

No photos of Jayaprakash Narayan’s visit to Bombay or his health. No news of Acharya Vinobha Bhave’s fast on cow slaughter.

Parliamentary subject to censorship. Apart from government statements, nothing else was allowed to be published, except the name and party affiliation of an MP.

No power supply to Bahadur Shah Zafar Marg which housed newspapers offices and presses. Papers like The Indian Express did not come out for the first two days.

Press Council of India wound up

Policy on government ads for newspapers and magazines reviewed.

Newspapers classified into three categories for ads: ‘A’ category for friendly, ‘B’ for hostile, ‘C’ for neutral. HT and ToI in A category; Express and Statesman were in B.

Detailed background records of all editors and correspondents with help of Intelligence Bureau (IB).

Over 30 correspondents were dis-accreditated for writing adverse reports or for being considered anti-establishment.

Censorship guidelines for foreign publications and agencies included not disclosing that their content had been censored.

When BBC refused to sign the agreement, its correspondent Mark Tully got 24 hours to leave the country.

Cho Ramaswamy’s Thughlak was barred from wishing Morarji Desai on his birthday.

Four presses where the newsletter Opinion was printed stopped accepted the assignment one after another. Editor A.D. Gorwala began cyclo-styling his leaflets and posting them. Then the postal department stopped mailing copies.

AIR part-time correspondent in Raipur, G.L. Vohra, sacked for a speech of Vijaya Lakshmi Pandit, although he had not reported it.

Government sought to appoint its directors on the board of The Statesman, Calcutta. Statesman shareholders were threatened, prompting the Tatas and Mafatlal to leave.

Statesman managing director C.R. Irani’s passport was impounded so that he wouldn’t go abroad to attend meetings of the International Press Institute (IPI).

Kuldip Nayar: Hindu, HT were the worst offenders in 1975

Did a newspaper interview bring an end to Emergency?