How did a Bombay film critic who lives alone, without a cooking range, TV or fridge, and who has eaten all his meals outside for 35 years, live through the 75-day lockdown? 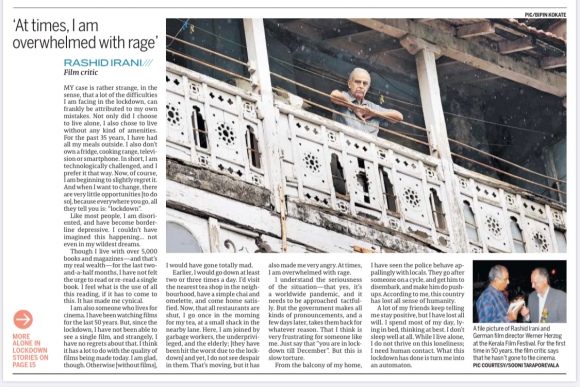 Rashid Irani, long time movie reviewer for The Times of India and then Hindustan Times, recounts his saga in Sunday Mid-Day.

“Though I live with over 5,000 books and magazines for the last two-and-a-half months, I have not felt the urge to read or re-read a single book. I feel what is the use of all this reading, if it has to come to this. It has made me cynical.

“I have been watching films for the last 50 years. But, since the lockdown, I have not been able to see a single film, and strangely, I have no regrets about that.

“Earlier, I would go down at least two or three times a day. I’d visit the nearest tea shop in the neighbourhood, have a simple chai and omelette, and come home satisfied. Now, that all restaurants are shut, I go once in the morning for my tea, at a small shack in the nearby lane. Here, I am joined by garbage workers, the underprivileged, and the elderly; [they have been hit the worst due to the lockdown] and yet, I do not see despair in them. That’s moving, but it has also made me very angry. At times, I am overwhelmed with rage.

“Like most people, I am disoriented, and have become borderline depressive. While I live alone, I do not thrive on this loneliness; I need human contact. What this lockdown has done is turn me into an automaton.“

The irony of Rashid Irani’s story is that the trained chartered accountant is the working partner of Brabourne, the eponymous Irani restaurant on Princess Street in Bombay with which his family has been associated since 1934.

After Rashid Irani’s troubling account appeared, some film folk jumped in. And the following diary item appears in today’s Mid-Day.

Also read: A portrait of a critic at the cash counter