Eenadu, the influential Telugu newspaper which pioneered hyper-local journalism before anybody in the country had even heard of the term, has shut down its local supplements and let go of hundreds of stringers who were reporting for it, as the shadow of COVID grows darker over India’s print media industry.

The newspaper, which played a stellar role in the emergence of a non-Congress opposition in Andhra Pradesh through its undisguised promotion of N.T. Rama Rao’s Telugu Desam Party, had a tabloid supplement for every district, city, and centre it published from.

The supplement—12-16 pages in most centres; 32 pages in cities like Hyderabad—came as an add-on to the main broadsheet paper, and covered local events in a manner never before done in Indian journalism.

Much of the content for these tabloid supplements was generated by local stringers, for whom “journalism was not the primary avocation”. The ads were local, too. 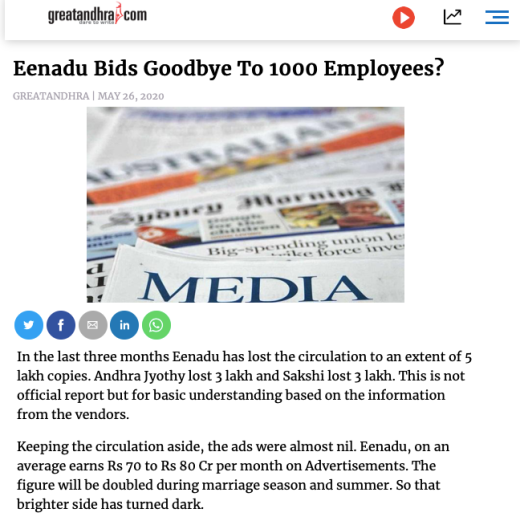 The gossipy Telugu website greatandhra.com reports that, with COVID resulting in a severe financial advertising and circulation squeeze for all media houses, Eenadu has let go off nearly a 1,000 employees.

Many of them, it is believed, are “contributors” reporting for the local supplements who were paid on a per-story basis. The stringers did not enjoy the same terms of employment as regular employees, or the social net.

It is also unlikely that most would have had even a formal appointment letter.

The local tabloid content is now incorporated in the main broadsheet.

Eenadu‘s hyperlocal model is now de rigueur in post-liberalised India, thanks to easier availability of printing technology and outsourcing, but back when Eenadu started it using its own presses in the mid-1980s, it was a pioneer.

Another Telugu daily Andhra Jyothi too has suspended its local supplements, while the Jaganmohan Reddy-owned Sakshi has cut down its supplements to the main profit centres.

Eenadu‘s owner Ramoji Rao and Andhra Jyothi‘s K. Radhakrishna were both invitees at prime minister Narendra Modi‘s “interaction” with owners of print media before he announced the lockdown on March 24.