As the Gulf countries pile up pressure against the growing Islamophobia in India, Dubai’s top English newspaper Gulf News has an editorial demanding action against Indian TV news channels which are spewing hatred. 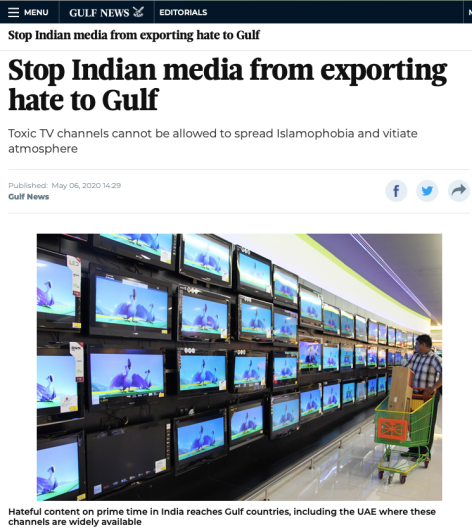 “Gulf News has been publishing incidents involving expats who were terminated by employers after they posted abusive content on social media. Many Indian expats who were called out for hatred and religious discrimination were long term residents of the UAE.

“Prominent Arab personalities based in the UAE and other Gulf countries have also raised concerns about growing Islamophobia among the expats. Indian embassies in the UAE, Oman and Qatar have issued warnings on social media conduct, reminding Indians about tough anti-discrimination laws.

“But the bigger question is why long-term residents who are familiar with local laws and sensitivities are posting such abusive content on social media? The culprit is Indian media, specifically some news channels which are exporting the narrative of hate against Muslims from India to the Gulf countries.

“It is well known that some popular channels twist news and build fake narratives to target Muslims in India. For example, media watchdogs have pointed out fake news of Muslims spitting on fruits to spread Coronavirus.

“This fake news was repeated on some news channels until people actually started believing it. Now, in several parts of India, Muslim vendors are boycotted and banned from entering neighbourhoods. This hateful content on prime time reaches Gulf countries, including the UAE where these channels are widely available.

“Hate propagated on live TV has a powerful impact especially when it comes from popular anchors. Authorities in the Gulf must take action against these channels, the preachers of hate, including Republic TV, Zee News, India TV, Aaj Tak, ABPandÂ Times Now.

“They must not be allowed to vitiate the social atmosphere of Gulf countries where tens of millions of diverse ethnicities and religious background work and live peacefully.”