The outbreak of the #Coronavirus pandemic has seen a clear shift in media strategy of the Narendra Modi government. Suddenly, an image-conscious regime has spotted an opening to up the game and control independent news flow—and seized it.

On the one hand, the prime minister, who has not held a press conference or met a quality journalist one-on-one in six years, descended to “interact” with handpicked owners of print and electronic media albeit with a video wall between them.

On the other hand, the phantom limbs of government have begun to show signs of life. Prasar Bharati, the allegedly autonomous corporation that runs Doordarshan and All India Radio, has launched an oxymoronic “news service” with its own Twitter handle.

All India Radio (AIR) and Doordarshan News (DD News), whose substandard output shames honest taxpayers every second they are on air, is suddenly competing with Asian News International (ANI) for the most cringe-worthy, facepalm propaganda.

But, by far, the most devious and dangerous of the Narendra Modi government’s post-COVID media moves has to do with the official information disseminator, Press Information Bureau (PIB).

PIB, by its very definition, is a mouthpiece and megaphone of the government: the “nodal agency” to distribute “information to print, electronic and new media on the government plans, policies, programme initiatives and achievements.”

It also decides on accreditation of media personnel in the capital, a useful arm-twisting tool of all governments, past and present, to control access.

In November 2019, Press Information Bureau went where it had never gone before in its 100 years of existence.

It announced the launch of a fact-checking unit to deal with “dubious material” across social media platforms related with government ministries, departments and schemes.

As the phraseology of the original creative (above) suggested, “PIB Fact Check” was mostly to deal with WhatsApp and Twitter and Facebook.

“Received a forward that looks too good to be true!!! or maybe came across a piece of news that you want verified !! Send it across and we will Fact Check it for you, no questions asked,” the Ministry of Information and Broadcasting said on its Twitter handle, reported Press Trust of India.

On the face of it, fact-checking in the age of unfiltered social media might seem like an unexceptionable gatekeeping service in the name of the people who elected a government to power.

But a closer look at “PIB Fact Check” only raises troubling questions of its intent and purpose in a free-market economy, as it strays away from its advertised mandate and begins looking at “mainstream media”: newspapers, news channels and news portals.

The simplest question, as with all government organs, is of efficiency.

For starters, “PIB Fact Check” cannot fact-check its own director-general’s name: Nitin Wakankar is spelt as Nitin Watankar (below, left).

Even if that typo is plain oversight—“human error”—in nearly five months of operation, the “PIB Fact Check” handle has tweeted a mere 289 times, barely twice a day.

Given that it also tweets the same information in multiple languages, and also tweets LKG-level opinion polls, that is nearly invisible activity in an ocean of fake news.

In fact, a fact-checking portal that has tweeted at the rate of just twice a day in a nation of nearly 17,000 newspaper titles and 450 news channels, proves in a counter-intuitive sort of way that the news media has done a better job than the government suspects.

In other words, PIB Fact Check’s output defeats the purpose for which it has been set up.

That may be debatable, but what is not is the selective lens of “PIB Fact Check”.

First, it follows only three ministries (home, health, HRD) of the nearly 50 ministries in the Narendra Modi regime. Why?

(On Instagram, it only follows MEA, and navy, army, air force, and Make in India.)

Second, while selectively outing mainstream news media outside its advertised mandate, “PIB Fact Check” brands the stories of some organisations (like The Caravan and Scroll) as “fake” but does not name others it deems guilty. Why?

The PIB game is so obvious that even lay readers see through it.

But the more germane questions about “PIB Fact Check” are to do with its overall objectives in a democracy which still has some legitimate claims to media freedom with constitutional backing—despite all that has happened since May 2014.

# Should the government be in the business of “fact-checking”?

# Does a government department have the expertise to do “fact-checking”?

# Who are the personnel behind “PIB Fact Check”: journalists or babus?

# Are the fact-checkers government employees or are they outsourced?

# If outsourced, how were these personnel picked? Was there a tender?

# What are their credentials and skills to sit in judgement over journalism?

# What is the experience of the fact-checkers in journalism and how it works?

# What is their distinction between “fake news” and editorial errors?

# Who has certified “PIB Fact Check” as a fact-checker? (Certainly not IFCN.)

There are dozens more questions like these that can be asked of “PIB Fact Check”, but PIB needs to come clean on the mammoth elephant in the “fake newsroom”: the government itself, more specifically the Narendra Modi government.

# What does @PIBFactCheck do when the members of the government, led by the PM himself, peddle fake news as they demonstrably have over the last six years? Is it true news when the government’s “fake news” is reported by news media?

# What does @PIBFactCheck do when departments of the government play fast and loose with the facts and dress up data or hide data, as they demonstrably have over the last six years? Is it true news when the government’s “fake news” is reported?

Admittedly, we are in the digital age, web 2.0 and all that, and PIB cannot function the same way as it did before the internet arrived.

Still, is instant judgement by unseen faces and uncertified hands the only way before a government that should be answerable to the people, not the image managers in the Prime Minister’s Office?

The civil and time-honoured rules of the game are for government and its ministries to respond to news stories, to issue rejoinders and clarifications to put its point across. If this fails, it can always seek recourse in the quasi-judicial Press Council of India, or in the courts of law.

“PIB Fact Check” short-circuits that process as a kangaroo court of instance justice. With scant understanding of how the media works, it is going around branding independent journalism, with all its flaws, as “fake”.

In a roundabout sort of way, this is little short of intimidation.

But who is surprised by that?

As befits a government whose leading lights have called the media “news traders” (Narendra Modi), “presstitutes” (Gen V.K. Singh) and worse, it starts off on the premise that government knows best and independent media is guilty until proven innocent.

And as befits a government that believes in one-way communication, it dispenses ex-parte justice. (Modi’s PMO does not have a professional media interface even after six years in power. He had a lame duck PRO sinecured out of Gujarat, who died in harness.)

PIB Fact Check’s exhortation in AD 2020 to trust the government over independent media makes a mockery of India’s strong history of journalism free from the shackles of government.

Exhibit A: “Rely on official source only!” says the government fact-checker while disputing a claim on an unnamed Marathi channel that UPSC exams have been cancelled in the wake of COVID.

Exhibit B: “Do not fall for fake and baseless media reports,” says the government face-checker while branding a story in The Caravan that the PM did not consult the 21-member scientific #COVID taskforce before extending the lockdown.

These illiterate exhortations sets up the media as an adversary in the eyes of the public, perhaps deliberately so, and draws the contours for a confrontational relationship that can impact the media and the citizenry in myriad other ways.

And what of its methods?

@PIBFactCheck but be the first site in the world that claims to certify a piece of news as a fact on the basis of an opinion poll.

In other words, facts as decided by the “court of public opinion”. 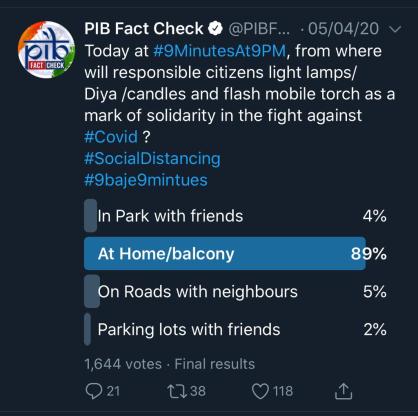 And, PIB Fact Check must be the first fact-checker in the world to refute a fact without providing the source.

People must trust it only because government says so.

So far, thankfully, “PIB Fact Check” has trained its guns only on a handful of mainstream media organisations: Scroll, The Caravan, India Today TV, ABP News, ABP Majha, and Public TV. It has mostly taken on the task of countering misinformation on sarkari stuff.

The damage has been limited, but a recent case involving The Hindu reveals the low street cred of “PIB Fact Check”.

On Thursday, April 16, The Hindu‘s Kashmir correspondent Peerzada Ashiq reported that sample collection for #Coronavirus tests in Srinagar had taken a hit after a consignment of 5,000 test kits were diverted to Jammu.

It said the alarm was raised by “top health officials” in Srinagar besides “officials in-charge” of the COVID crisis in the “Divisional Commissioner’s office”. The state chief secretary’s intervention, it said, brought the diverted kits back.

In other words, everything was official about The Hindu story.

Since names were named, egos were bruised, and hyper-sensitivity is the zeitgeist of a government that can do no wrong, a full-fledged denial followed from the department of information and public relations of Kashmir.

Instead of the divisional officer indicted in The Hindu story, the principal of a government medical college in Srinagar was hauled out to offer a denial.

Dutifully, a Kashmir IAS officer tweeted the denial at 6.38 pm on the day of publication of The Hindu story, Thursday, April 16.

The Hindu reporter, Peerzada Ashiq, responded within 90 minutes. He stuck to the story and requested that the tweet be withdrawn.

Since tar-brushing independent journalism is a large-scale industry in the post-truth world, the babus manning Press Information Bureau in Delhi were getting into the denial drill as early as 7.39 am on Friday, April 17.

An hour later, the denial was further sought to be amplified by the oxymoronically named “Prasar Bharati News Services” (independent news is a conflict of interest at Doordarshan and All India Radio).

PIBFactCheck, the Twitter handle of PIB—whose advertised mission is “Countering misinformation on Govt. policies/schemes.”—followed suit and tweeted the denial with the “Fake” stamp.

It was the second Hindu story PIB chose to refute in two days. But it deleted the Kashmir tweet late on Friday evening when no one was watching.

A future media historian might want to tell us what are the ethics of an anonymous government fact-checker certifying a bylined story as “fake” and then quietly deleting its claim, while it continues to exist on its parent and parasite organs.

Any wonder, a subsequent report by the same Hindu reporter three days later was declared as “fake news” without as much as a rejoinder or clarifiction?

And when you get used to dishing out instant justice, what happens to news that was branded “fake” turns out to be true over time?

“Big Brother”—also known as Upar Wala—must be having a hearty laugh at the ongoing perfidy on mainstream media in the name of a tiny virus.