In 1988, Andrew Grove, the founder and former CEO of the American chip-manufacturing giant Intel, wrote a book titled Only the Paranoid Survive, in which he floated the concept of the “strategic inflection point”.

“A strategic inflection point is a time in the life of a business when its fundamentals are about to change. That change can mean an opportunity to rise to new heights. But it may just as likely signal the beginning of the end.”

Shorn of the jargon, a strategic inflection point is a “nightmare moment”.

As a puny pathogen called #CoronaVirus brings the world to its knees, now is a good time to ask: has the Indian print media sector reached a strategic inflection point?

Will it recover and rise once #COVID has been conquered?

Or, will it shrink, and sink, further into irrelevance?

Despite the heroic efforts by everybody in the print food chain to reach readers in the last few weeks, the signs are far from encouraging.

# The Indian Newspaper Society (INS) has said the newspaper industry, hit by the “triple whammy” of #CoronaVirus, falling advertising revenues and customs duty on newsprint, is in very real danger of turning “sick”.

# Citing a fall in ad revenues and print orders, the Indian Express group has mooted a 10-30 per cent salary cut for staff earning over Rs 5 lakh per annum, and warned of “more sacrifices” if things do not improve. Business Standard has followed suit with a 10-30 per cent pay cut for those earning upwards of Rs 10 lakh per year. More newspaper groups are likely to follow.

# Sportstar, the sports magazine from The Hindu group, has suspended publication of its print edition for the first time in nearly 43 years, owing to the problem of distribution during the period of the lockdown.

# Taranga, the weekly from the Udayavani group of the Pais of Manipal, has decided to shut both the offline and online versions at least till the period of the lockdown.

# The Hindi daily Mahanagar published from Mumbai, Pune and Nashik closed at a day’s notice. India Abroad, the ethnic Indian weekly published out of New York, has shut shop in its 50th anniversary.

# At least 15 employees of Sakal Times, the English newspaper published by the Marathi group Sakal owned by the powerful Sharad Pawar family, have reportedly been let go in a “cost-cutting exercise” without adequate notice.

In short, even before #CoronaVirus enters the next stage, India’s print media appears to be on the ventilator, gasping for breath, cutting staff, cutting salaries, cutting print orders, cutting editions—virtually cutting off its hands and legs.

“We are all in a deep mess,” says a leading newspaper baron. “The time has come for every business to press the ‘reset’ button, print media more so.”

To be sure, Indian newspaper owners collectively do tend to exaggerate their fears.

For instance, when the Manmohan Singh government approved the Majithia wage board recommendations in 2011, INS said the move “would kill most newspapers“. Nearly 10 years on, most are still very much around; many have grown in size.

And, to be sure, again, it is not as if things were hunky-dory before #CoronaVirus arrived.

# Print publications, which depend almost entirely on advertisements for sustenance to make up for their low cover price, have never fully recovered from the downturn of the global economy that began in 2007-08.

# The explosion of the internet and social media has seen readers desert print publications in droves and spend more time online, where Google and Facebook take away nearly 70 per cent of online advertising revenue.

# The falling value of the rupee and the rising price of oil has seen foreign newsprint get more expensive, on top of which the Narendra Modi government imposed a 10% customs duty (which has since been reduced to 5%).

That said, something about the current crisis smells different and suggests that things are far from ordinary.

Both shortfalls have happened before but never together.

“The story of print media can now be put neatly into two boxes, pre-Coronavirus and post-Coronavirus,” says a newspaper manager. “The former was bad; the latter is going to be infinitely worse.”

Adds a key functionary in a South-based family-owned newspaper group: “The strategic inflection point was approaching print media in the last couple of years, but perhaps not as quickly as now. That gave us some elbow room at least. Not after this disruption.” 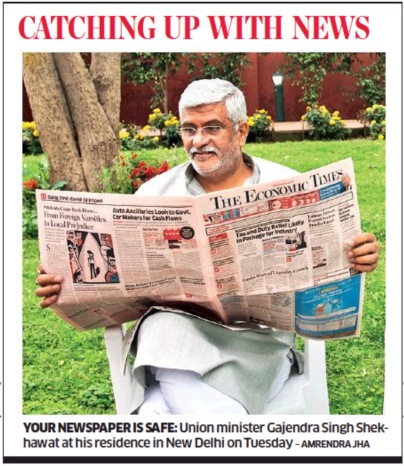 Of course, this is a generalisation.

What applies to one might not to the other. There are exceptions to every rule, and some newspapers and magazines are definitely better placed than others to tide over this “strategic inflection point”.

That said, for the first time, newspapers and magazines across India have been affected by #CoronaVirus in more or less the same way. Those that belong to groups that are in other businesses are affected in myriad other ways.

# Despite a blitzkrieg of stories and advertisements certifying newspapers as safe from the virus, distributors and their unions have refused to lift copies.

# Apartment blocks and residents welfare associations have disallowed newspaper hawkers from delivering copies to individual homes due to fear of contamination.

# With all retail and online businesses shut, publishers have been forced to trim pages, cut print orders, and make do with slim editions stuffed with low-yielding tender notices.

# Publications which have a pay wall have had to lower it partly or in its entirety since it was not economically viable to print small print runs or see readers go elsewhere.

# Journalists have reported, edited, designed and scheduled by remote, and everyone—from proprietors and editors to reporters—has been compelled to tweet or post links of stories on WhatsApp groups to evangelise the e-paper.

In other words, in a moment of crisis, newspapers and their employees have been forced to dig deep and relook at the very fundamentals of their business, inside out.

The question is which of these could become the “new normal” when the virus threat has passed?

The peculiar position print media finds itself in became clear during the so-called “interaction” hand-picked representatives had with prime minister Narendra Modi six hours before he went on air on March 25 to announce a 21-day “lockdown”.

That a PM who has not held a single press conference in six years, and who did not meet them before he announced #Demonetisation in 2016 or revoked Kashmir’s special status in 2019, was seeking them out now, told its own story.

That he was only meeting the owners—not the editors—told another.

At the “interaction”, Modi, who has loudly advertised his contempt for the media on several occasions, was reduced to issuing certificates for it: “Its pan-India reach gives it a key role… it has tremendous credibility.”

Astonishingly, or perhaps understandably, his mundane comments ended up becoming the tagline for a Hindustan Times campaign.

An earlier comment by Modi that journalists were working hard to get correct information out found its way into the INS petition to finance minister Sitharaman seeking a two-year tax holiday.

Media owners and managers generally believe in striking when the iron is hot.

Using a “nightmare moment” to trim the topline, to cut flab, to downsize, to rightsize, to “degrow”, to extract concessions from the government, etc, are all par for the course.

They have done it before and it is not beyond them to do it again.

To that extent #CoronaVirus gives them the perfect cover to take brutal business decisions that would have been difficult or unthinkable in peace time.

“Salary cuts are reflective of bad times, but great organisations should be able to weather the challenge and not pass it on to employees, my view,” says a newspaper industry executive.

But the print media’s current plight is exacerbated by several factors.

All its traditional advertisers—automotive, online retailers, construction, education, travel, hospitality—are all hit by the same #Coronavirus shutdown and all their businesses are down.

If and when things get back to normal, will they look at print the same way when the cheaper option of digital advertising is before them?

Or, will government advertising continue to be the key revenue driver, with all its attendant risks of compliance and subservience? Then again, will government itself continue to advertise like before, when its tax and GST collections are certain to be hit by #CoronaVirus; when it has other more urgent expenditures to make?

Equally, will print media promoters and publishers look at their legacy businesses in the same way when they have seen online readership soar during the lockdown, without the attendant costs of production, transportation or distribution?

And will readers look at their print media vehicles the same way as before, will they renew subscriptions at a price when they have got the news, views and juice fresh and straight into their pockets almost for free on social and digital media? 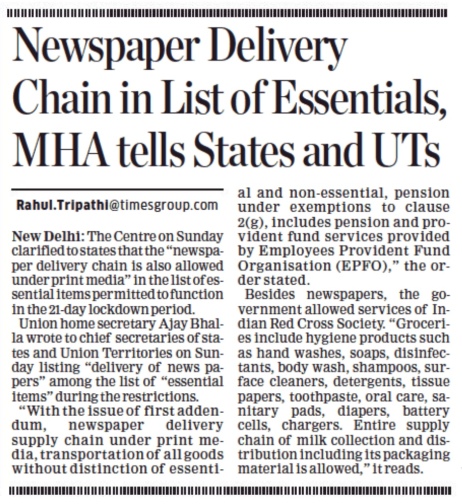 News of the Union home ministry including  “newspaper delivery chain” in the list of essential items permitted to function in the 21-day lockdown period was reported with much glee by newspapers which have a vested interest in the matter.

But the big question little #Coronavirus has posed is this: information may be essential to citizens at a “strategic inflection point” like a pandemic, but does that mean the same thing as physical newspapers—and physical magazines?

Usually the answers to a question mark in newspaper headlines is “no”.

An earlier version of this piece is on Rediff.com

This piece can also be heard as a podcast on SoundCloud