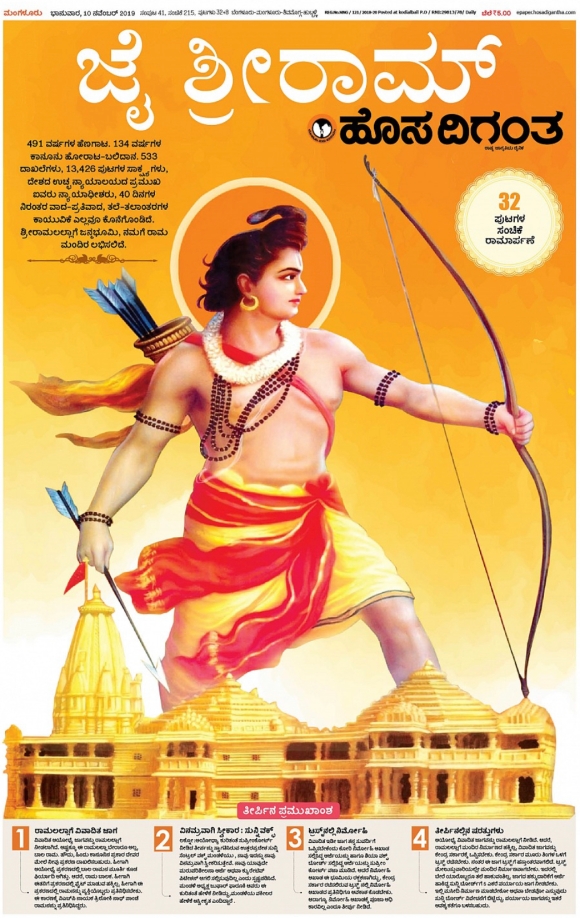 The symbiotic relationship between the Hindi language press and the Ramjanmabhoomi movement, each feeding off the other, has been much documented. Today’s front pages, the day after the Supreme Court delivered its verdict, shines a mirror on it.

As opposed to the safe, anodyne headlines of English newspapers, which for the most part are sober, balanced and responsible, the Hindi papers are, generally speaking, more triumphalist in their interpretation and presentation.

Only The Telegraph, Calcutta, goes out of its way to editorialise the Supreme Court judgment, but the front pages of most English newspapers, on the whole, underline the “disconnect” between so-called “liberal” and “conservative” media, a division the BJP exploited to the hilt before it succeeded in appropriating that space too.

Equally, there is a marked difference between the coverage of the Hindi press and the south Indian languages. Within the South, there are clear and sharp differences between the Kannada and Telugu media, where the sangh parivar has managed to make inroads, and the Tamil and Malayalam media, which remains largely out of bounds.

Dainik Jagran, the large circulation Hindi daily whose growth in circulation was concomitant with the Ram Janmabhoomi movement, leads the charge with a gung-ho front page which removes the distinction between a newspaper and a pamphlet.

Dainik Bhaskar, not too far behind in its commitment to the Hindutva cause, and Hindustan, from the Hindustan Times group, and Navbharat Times from the Times group, are more sober, but not by very much.

The real surprises, though, are Rajasthan Patrika, which has often found itself in the crosshairs with BJP on matters commercial, and Prabhat Khabar, the latter edited by Harivansh till he became the deputy chairman of the Rajya Sabha.

In the peninsular South, where the homelessness of Lord Ram has been less of a concern in the minds of voters, the emerging faultlines can be clearly seen between the Kannada media and the other three languages.

Hosa Digantha (above), a full-fledged sangh operation, has a 32-page special issue in two sections, with a “Jai Shri Ram” headline leaving little doubt why Karnataka has increasingly been an exception in the south in welcoming BJP.

Barring Praja Vani, from the Deccan Herald group, all the Kannada broadsheets look and sound identical in their lead headlines. 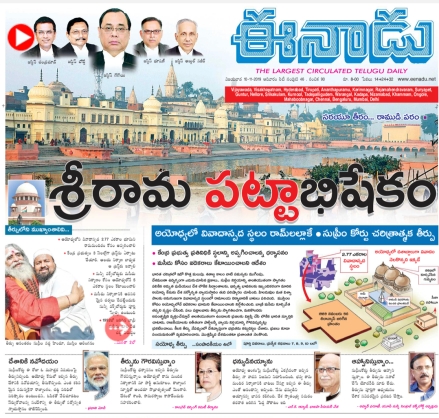 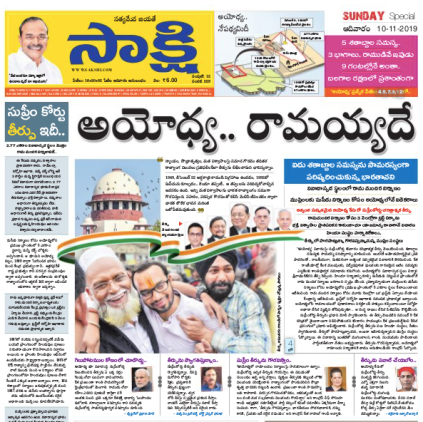 The Telugu daily Eenadu, a key player in the emergence of a non-Congress opposition in the mid-1980s, calls the SC judgment “Sri Rama Pattabhishekham”, and Sakshi, owned by the state’s Christian chief minister Y.S. Jagan Mohan Reddy, plays up the inter-religious bonhomie heralding the verdict.

It is only in the Tamil and Malayalam newspapers that the front-page accent is less on the “bhavya mandir” and more on the nitty gritty of the court order.