As the lockdown—jargon for a brutal, undemocratic suppression of civil liberties—in Kashmir enters its fifth day, Zulfikar Majid, the Srinagar correspondent of Bangalore’s oldest English daily Deccan Herald recounts his search for an internet connection.

“I managed to reach the office of a regional newspaper, hoping to get internet access.

“I saw the faces of two old friends who worked there and I knew something was wrong.

“I asked them why they were not filing stories. And I got another shock. The dedicated internet line for their office had also been snapped.”

Majid and his compatriots approach the deputy commissioner’s office to obtain curfew passes. No luck.

“An official at that office told us that no curfew passes were being issued and there were strict orders that no local reporter should receive a pass.”

“The next stop in our internet hunt was the office of the Senior Superintendent of Police, Security, who is considered to be media-friendly. However, our hopes were dashed again.

“Walking many miles in hot and humid conditions took its toll. I made one final attempt to locate internet access. As my two journalist friends left, I decided to visit the local office of a national TV channel, which was two kilometres away.

“The time had reached 9 p.m. and I had not eaten the whole day. A local TV channel reporter and long-time friend offered tea and snacks but there was no internet.

“Tuesday and Wednesday were no different.”

In The Hindu, Vijaita Singh records the distrust of Indian media of Sajjad, a resident of Baramulla in north Kashmir.

“They say everything is normal in Kashmir. The last time I read a newspaper was five days ago. I do not trust what the Delhi-based TV channels are airing,” the 27-year-old hotel worker says.

A 50-year-old man, who did not wish to be identified, says much the same of media coverage.

“The local cable channels are blocked. The Delhi-based channels say there is no curfew here and that life is completely normal. Thrice I heard the CRPF personnel announce on loudspeakers last night that there is curfew and we should not come out.” 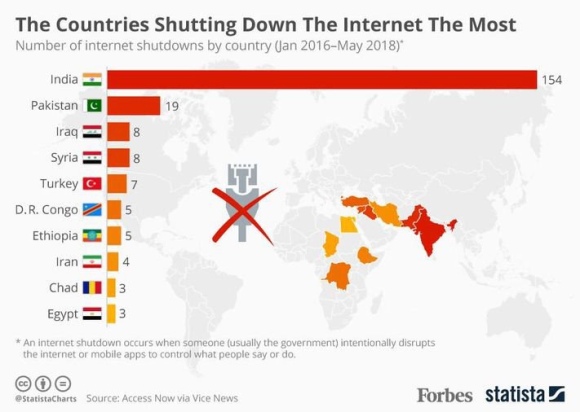 On the website of the media advocacy group Committee to Protect Journalists, Kunal Majumder and Aliya Ifthikhar capture a range of voices on the travails of reporting from the Valley.

# The few newspapers that are coming out are vastly reduced in their pagination.

# In the absence of the internet, newspapers are completely dependent on news agencies like PTI and IANS.

# Newspaper distributors have been stopped in some areas, particularly north of Jammu city.

# Local journalists are not reporting because they are being constantly harassed, stopped at barricades and abused.

“In fact, it is easier to move around without a press card. If you tell the security personnel that you are a journalist, they try to stop you.” 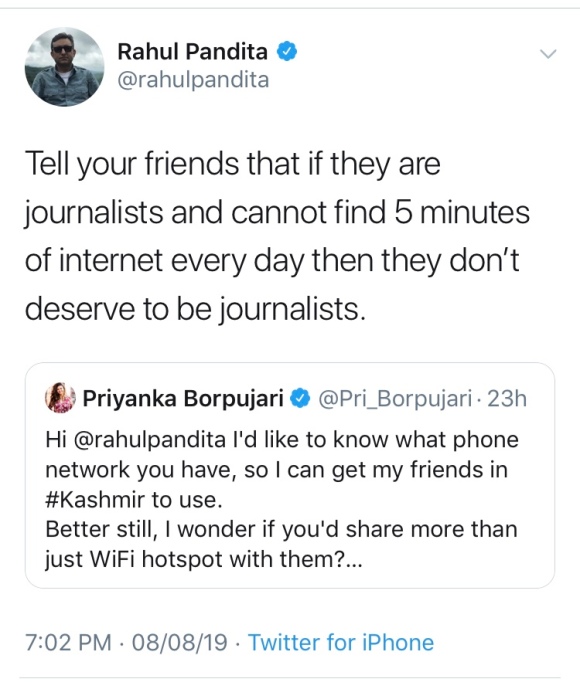 Early on August 9, Aazaan Javaid, who reports for the website The Print, wrote on Twitter that his broadband connection was flickering to life.