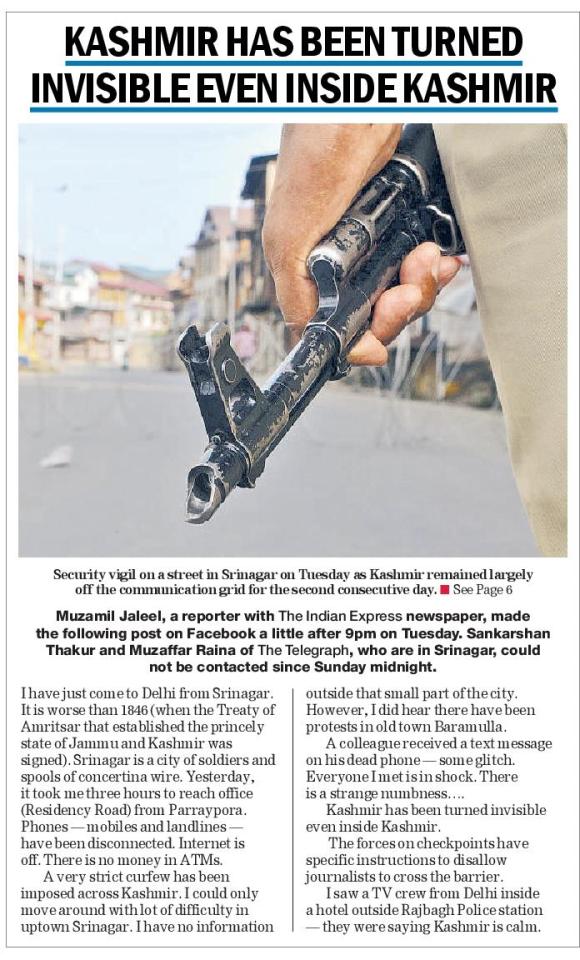 The “lockdown” of Kashmir—mild jargon for a brutal, undemocratic suppression of civil liberties in the Valley—in the run up to and following the bifurcation of the State has cast a dark shadow over journalism with phone lines cut and internet shut.

The Telegraph (above) reports in its issue today that it has not been able to contact its correspondents Sankarshan Thakur and Muzaffar Raina who are in Srinagar. 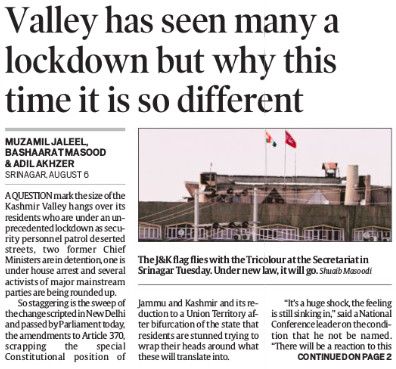 The Indian Express‘s Muzamil Jaleel, whose report appears in today’s paper (above), posted on Facebook (below) that security forces are under specific instruction to disallow journalists. 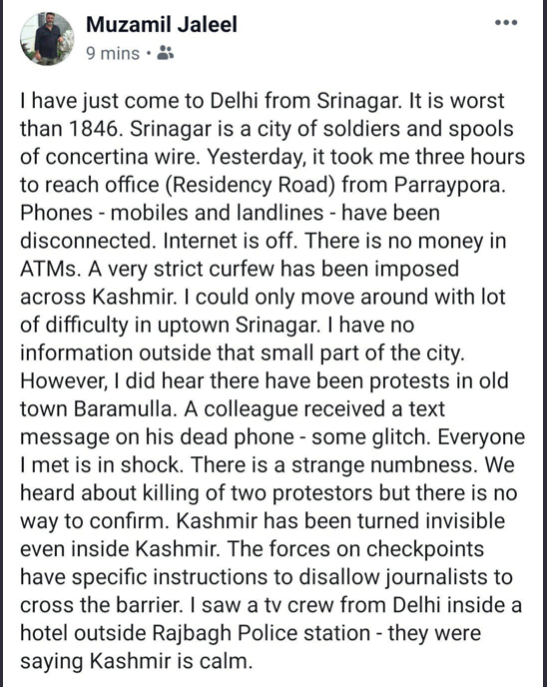 NDTV’s Naseer Masoodi, who managed to go around a bit in his car, showed how impenetrable the security barriers were. With phone lines down, he said the only way to speak to sources and subjects was to physically visit them.

Only an outdoor broadcasting (OB) van with a satellite link enabled Masoodi to report his travails.

On Time.com, Fahad Shah of The Kashmir Walla wrote:

“People remain cut off from their families, and journalists have no channels of communication to report through. The online homepage of Kashmir’s largest local paper is blank and the website of our own magazine has been offline since Monday. Many journalists like me have had to send out work on thumb drives with passengers flying out of the area by airplane. Only a small group of people using satellite dish networks have access to TV news channels.” 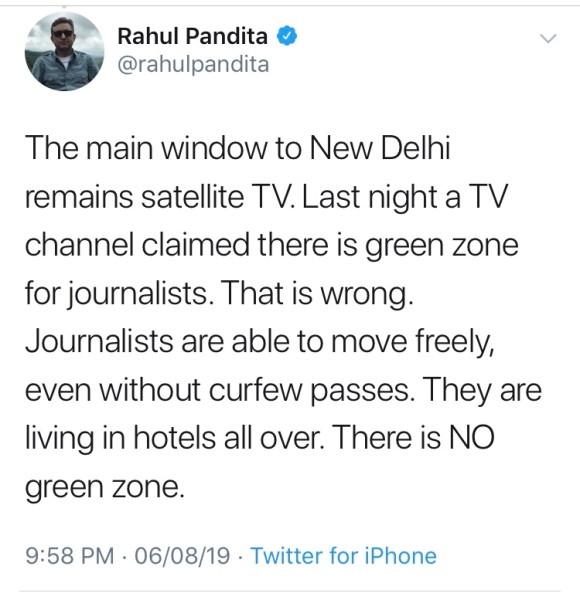 Danish Siddiqui, the Pulitzer Prize-winning chief photographer of Reuters, tweeted that a picture shot by the agency’s Kashmir-based photog took 12 hours to reach the desk.

Abid Hussain, a journalist based in Karachi, tweeted that a BBC Hindi correspondent was made to delete pictures he had taken. 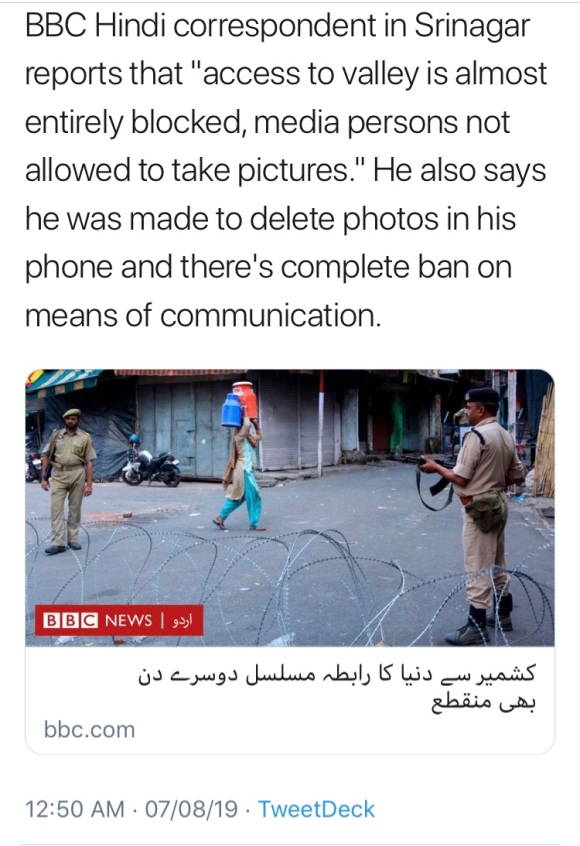 “I reported for The Hindu and Frontline under the most trying circumstances intermittently from #Kashmir between Dec 1989 to Feb 1995. I always managed to land my story. But today it’s so sad to see that there are no Srinagar datelined stories in our papers.

“There was curfew, shootings, kidnappings, murders. But every time — tough as it was — the story landed and was used. And, a reminder: we had phones, telex machines and the occasional fax facility. And, it was the CTO (Central Telegraph Office) where we went to file.

“Today, all comms are personal, but everything has been shut down by the Govt. Unprecedented.”

Dr Malini Parthasarathy, the co-chairperson of The Hindu,

It’s very unfortunate that our Srinagar correspondent @peerashiq has not been able to file reports from the ground because of the communications shut-off. We aren’t able to independently report the ground reality in Kashmir, despite having a reporter there! https://t.co/8p4DKDfIO4

The Twitter accounts of most Srinagar based journalists have not been updated since August 4.

“The internet disruption began yesterday (August 4), and today there were reports of a complete communication blackout, with broadband internet, postpaid mobile internet, mobile voice connections across different telecoms, and landline services all blocked, according to the internet advocacy group NetBlocks, news reports, and an independent researcher who spoke with CPJ but wished to remain unnamed in order to protect a source, reported the Committee to Protect Journalists (CPJ). 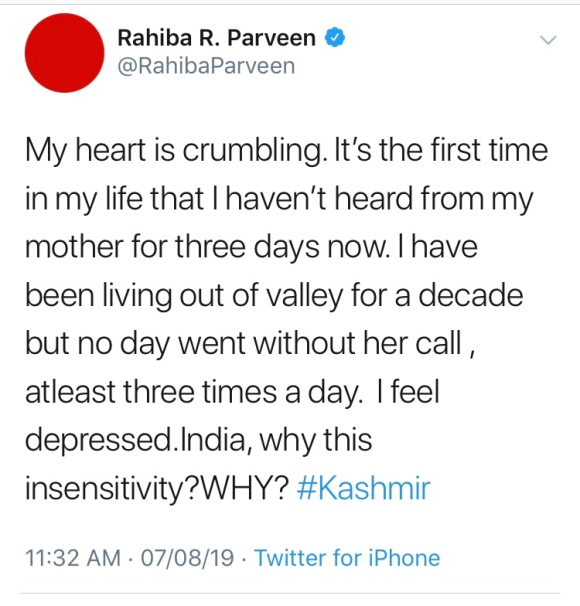