These aren’t the days when journalists wake up and feel great about the world—or their profession. But Man Aman Singh Chhina of the The Indian Express has enough reason to feel proud of the power of the press even in these gloomy times.

On Friday, July 26, his paper front-paged a report on a Kargil hero—a Vir Chakra, who had killed a Pakistani officer and three others, 20 years ago–manning the traffic lights in a small town in Punjab, in 2019.

Three days later, on Monday, Satpal Singh was being promoted to assistant sub-inspector by his State’s chief minister, Captain Amrinder Singh, himself a decorated soldier and war historian, who had recorded his valour in a book.

‘There you are,’ says @capt_amarinder to newly promoted Kargil War hero, ASI Satpal Singh, showing where he mentioned the Vir Chakra awardee in his book – `A Ridge Too Far – War in the Kargil Heights’. pic.twitter.com/OvGihxuabS

The Indian Express reporter was justifiably happy on being able to make a difference. 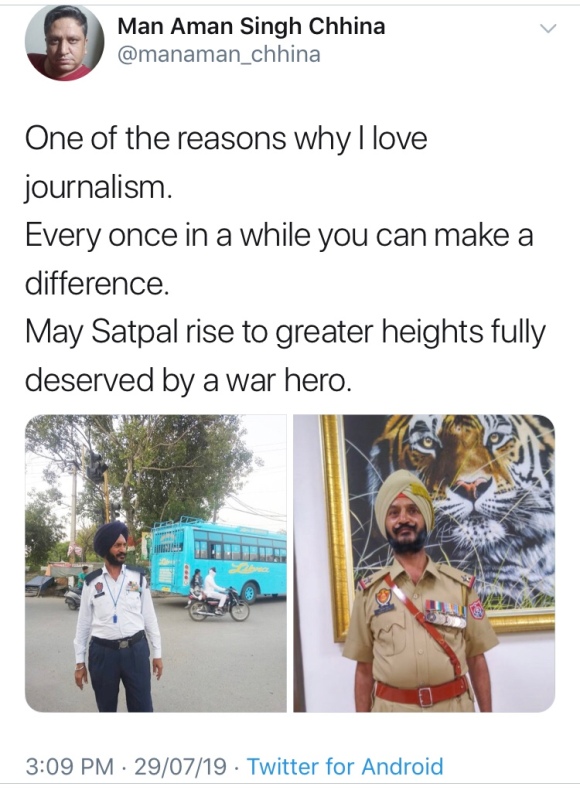 No story is complete without the studio warriors from the commando comic channel chirping in.

But it took a maverick to introduce the right element of cynicism, to ask why the otherwise massively organised Armed Forces allows its heroes to rot.