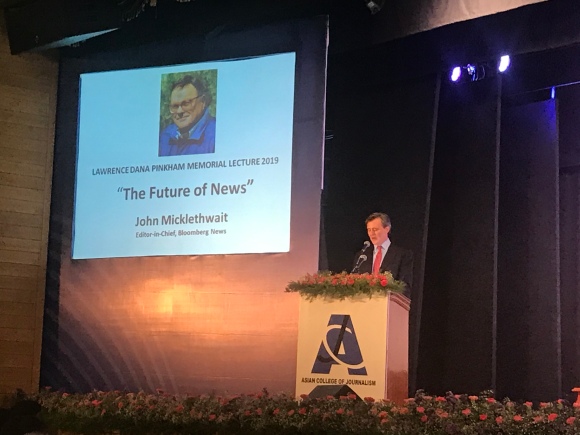 From Johannes Gutenberg‘s printing press to Tim Berners Lee‘s world wide web, and the telegram, radio and television in between, journalism has been constantly shaped and changed by technology—and not always for the worse.

In the 21st century, the news media business is grappling, like other industries, with the prospect of machine learning and Artificial Intelligence (AI) hovering over newsrooms, sparking fears of job losses.

The business news behemoth Bloomberg, which supplies business terminals, has a news wire, a clutch of TV and radio stations, and a magazine, has 5,000 engineers, including 200 of them working in areas of AI.

John Micklethwait, editor-in-chief of Bloomberg News, spoke on the “future of news” at the annual convocation of the Asian College of Journalism (ACJ) in Chennai.

He believes AI will change journalism in four areas:

# Machines will scour vast tracts of social media, news media and other sources, spot and suggest stories that can be reported by humans, virtually playing the role of a commissioning editor.

# AI will enable for greater personalisation of the news experience for consumers on different devices by measuring consumption habits more deeply than at present.

Micklethwait, also a former editor of The Economist, says the human side will continue to matter in journalism despite the advent of robotics. But the core functions of journalists will change from the ‘what’ to the ‘why’ and ‘what next’, allowing for deeper, more thoughtful journalism.