APRIL 16: A full page “package” in ‘Vijaya Vani’, carrying the allegedly fake letter to Sonia Gandhi, with a Kannada translation

A leading Kannada newspaper owned by a former three-term BJP MP and a serial fake news peddler followed by Narendra Modi on Twitter, have been embroiled in a forged letter scandal, following the arrest of a “journalist” owing allegiance to the RSS.

# The fake news peddler is Mahesh Vikram Hegde, the so-called editor of the fake news website Post Card News, which has links with at least two BJP MPs.

# And the embedded ‘sangh parivar’ journalist whose arrest has landed them in trouble is S.A. Hemanth Kumar, 57, a “special correspondent” for the Delhi-based right-leaning magazine Uday India, who also performed media duties for the BJP.

Hemanth Kumar’s arrest has resulted in prominent BJP members in Karnataka meeting the Karnataka police chief in a delegation. And an outgoing BJP MP has shot off a petition to the Union home minister Rajnath Singh.

Hemanth Kumar had previously worked for The Asian Age, The New Indian Express and The Times of India in Bangalore, and the Delhi-based Rashtriya Sahara.

At the heart of the “fake news” scandal is the facsimile of a letter published by Vijaya Vani on April 16, 2019—two days before voters in 14 constituencies in southern Karnataka cast their ballot in the elections—as part of a full-page “package”.

M.B. Patil is a Karnataka Congressman, minister, and a Lingayat educationist. In the previous Congress government of Siddaramaiah, he played a key role in the demand of Lingayats to be considered as a community distinct from Hindus.

(Vijaya Vani‘s owner Vijay Sankeshwar is a Lingayat too.)

The 2017 letter in English (below), purportedly from M.B. Patil to Sonia Gandhi, bragged of a “Global Christian Council” and “World Islamic Organisation” working in cahoots with the Congress, at the behest of its then Congress president, for the division of the Lingayat community, which has a sizeable presence in Karnataka, Maharashtra and Andhra Pradesh.

All very juicy, except that the letter had been exposed by the fact-checking website Alt News as a ham-handed “fake” in May 2018 during the Karnataka assembly elections. A simple Google search showed that there were no organisations by those names.

Although the “fake letter” had floated around since then, no other Kannada newspaper published it this time, except Vijaya Vani whose whole package was predicated on the buzz it was generating on social media platforms.

(Vijaya Vani is reported to have published contents from the same fake letter on May 12, 2018, too, but that edition is not available on its e-paper website.)

After the fake letter was published by Vijaya Vani on April 16, M.B. Patil, who is president of the Bijapur Lingayat District Education (BLDE) Association, took out a quarter-page advertisement in the offending newspaper the next day.

In the advertisement, Patil dismissed its authenticity, pointing out the differences between his actual letter head and the fake one, the spelling mistakes, and font changes. The fake letter had even got the phone number, website and pin code wrong.

In the advertisement in Vijaya Vani (above), Patil does not mention Vijaya Vani‘s role in the publication and dissemination of the fake letter. He mentions Post Card News, on whose website the letter had been published last year, which Alt News busted as fake.

“When questioned, Post Card News claimed it had received the fake letter from a reliable person, who has stopped taking our calls,” Patil said in the ad.

But in a formal police complaint filed in Vijayapura (Bijapur), minister M.B. Patil names Vijaya Vani and claims he had been defamed by the Vijaya Vani article.

(Hegde had been arrested last year for fabricating news about a Jain monk being attacked by Muslim youth and was represented in court by BJP’s Bangalore South candidate in the 2019 elections, Tejasvi Surya.)

Mint reports that Prime minister Narendra Modi, who follows Hegde on Twitter, had alluded to the contents of the fake letter during an election rally in Bagalkot last week.

A report in Deccan Herald says Hegde sought more time to find out the source, but the police interrogation on the basis of M.B. Patil’s complaint was sufficient for BJP folk to go ballistic about Hegde’s “arrest” when he had only been detained for questioning.

Another version has it that it was Hegde who led the police to S.A. Hemanth Kumar.

(Both Shivappa and Yeddyurappa hail from the same district, Shivamogga.)

Hemanth Kumar, who has been spotted by journalists in the media cell of the BJP writing its English press releases, was picked up by the CID police on April 27 when he returned from a TV show, and remanded to custody till April 30.

(His judicial remand has since been extended to May 2.)

“Hemanth Kumar has been arrested on credible evidence corroborated by oral statement,” a CID press release quoted by The New Indian Express said.

Reports in a number of newspapers termed Hemanth Kumar as a BJP sympathiser of the party. At least one journalist remembers seeing Kumar march in the trademark half-pants of the RSS at a meet in Bangalore last year.

Vijaya Vani did not report the arrest of Hemanth Kumar or M.B. Patil naming the paper in his police complaint but reported that a bunch of BJP leaders met the state DGP to demand his release.

Like with Mahesh Vikram Hegde’s arrest last year, which saw a host of BJP leaders springing to his support, Shobha Karandlaje, the BJP MP from Udupi-Chikmagalur, jumped to Hemanth Kumar’s rescue with a letter to the Union home minister. 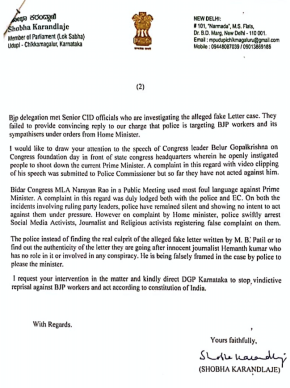 So, the incredible fake letter story as it stands:

Post Card News publishes the fake letter on the day of the assembly elections in Karnataka in 2018. Asked to prove its authorship its so-called editor says he “received it from a reliable source” and pulls out the tendentious story.

M.B. Patil complains to the Election Commission but does not follow it to its legal and logical conclusion.

Vijaya Vani republishes the same fake letter in 2019 under the facetious claim that it was dominating the discourse on social media.

Detained by police and questioned in 2019, Mahesh Vikram Hegde seeks more time to find out who created the fake letter in the first place which he published in 2018.

Journalist and BJP-RSS media functionary S.A. Hemanth Kumar reportedly tells police during interrogation that he took it off the net.

The simple question is: did Mahesh Vikram Hegde and/or his “team” create the fake letter? Or was it sent to them by somebody which they then uploaded on their website? Was that somebody Hemanth Kumar?

And what is the liability of Vijaya Vani in publishing a fake letter not once, but twice? Is it absolved of spreading defamation merely because it picked up the story from social media?

At one level, the arrests of multiple fake news peddlers and journalists in Karnataka with sangh parivar links at election time underscores the BJP charge that the Congress and JDS were misusing the police to carry out vendetta politics.

(In February this year, another journalist working for BJP leader B.S. Yeddyurappa had been named in a first information report.)

At another level, though, it shows the deep penetration of fake news, images, insinuations and innuendos in Karnataka at a time of heightened social media use—and the political patronage it enjoys from the BJP and RSS.

In a state where journalists and writers have been killed at their doorstep or in their verandah, the mainstreaming of fake news by a leading newspaper, which also owns a TV channel, has grave implications for journalism and politics. 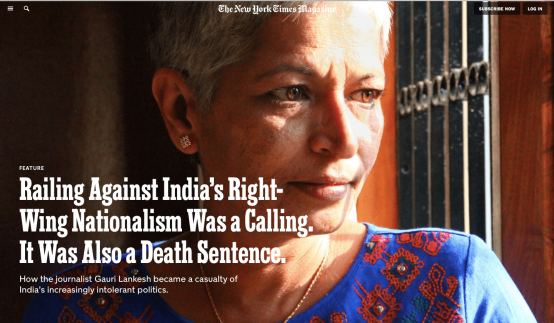 In March this year, the arrested BJP-RSS journalist Hemanth Kumar had been quoted by Rollo Romig in a profile in The New York Times magazine of the slain Bangalore journalist Gauri Lankesh.

“In the crowd I met a friendly middle-aged journalist named S.A. Hemantha Kumar who introduced me to Sabitha Rao, a BJP supporter who used to work for a mainstream newspaper called the Deccan Herald.

“When Kumar learned I was writing about Lankesh, he excitedly gave me a copy of an issue of the magazine he writes for, a right-wing weekly called Uday India, with a cover story on Lankesh. Kumar’s own article described her as “a so-called journalist with a devious agenda, dubious character & malicious intent.”

She had a concern for the poor, no doubt about it, Kumar said of Lankesh. She was a very passionate person, eccentric and perverse. Pervert thinking. She had no children. A strange marriage. But she had a lot of boyfriends. That has nothing to do with it, just telling you. She was taking drugs as of late. (There is no evidence that this was the case.)

She was drinking, she was smoking, she had taken to drugs, Kumar continued. She lived alone. Huge house.â€ (It is actually fairly modest, and her mother owned it.) She was not a good journalist.

“Very coarse,” Kumar agreed. But ultimately, killing is sad. Killing is not acceptable. You cannot justify it.

Update: T.A. Johnson reports in The Indian Express on 3 May 2019 that BJP spokesperson Vivek Reddy appeared in court to plead for the bail of S.A. Hemanth Kumar:

BJP in Karnataka puts an official seal on party's deep involvement in the "fake news" factory in state. Protests against arrest of 'sangh parivar' journalist alleged to be behind a "forged letter" published by 'Vijaya Vani', a newspaper owned by a former BJP MP. @VVani4U (1/2) pic.twitter.com/oaQjNVBZL9

Why are regional newspaper groups so eager to send owners to interview netas?