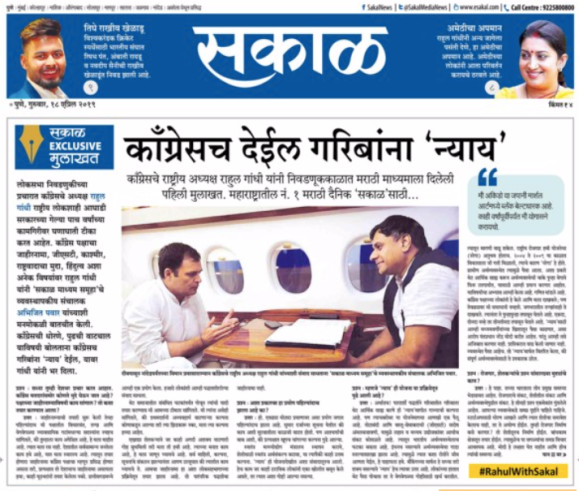 Publicity is the mother of election. So, in a seven-phase poll Narendra Modi and Rahul Gandhi are gaming their “interviews” to big-circulation publications in states heading to the hustings, phase by phase.

Modi spoke to the Kannada daily Vijaya Vani before 14 constituencies in the southern part of Karnataka voted on April 18. And Gandhi spoke to The Hindu the day all 39 of Tamil Nadu’s Lok Sabha seats were voting in the second phase, and so on.

But who are these leaders giving “interviews” to?

Rahul Gandhi’s interview with the Marathi newspaper Sakal which belongs to the family of the NCP leader Sharad Pawar, appeared on the day 10 seats in the state were going to the polls. Congress and NCP are electoral allies in Maharashtra.

Gandhi’s in-flight Sakal interview (in picture, above) was not with its Editor Avinash Phadnis or its Delhi bureau chief, but with Abhijit Pawar, the “managing director” of the paper, whose name in fact does not even appear on the imprint line.

Understandably, in family-owned publications, especially in the languages, owners call all the shots. Understandably, a party cannot dictate who will interview its chief, although the preference is always for someone of stature.

Still, there are messages sent and received when an owner himself plays interviewer.

Mr @RahulGandhi is aiming for the sky. Got a very unique perspective through this interesting discussion.#RahulWithSakal #loksabhaelections2019 pic.twitter.com/sXzfeUitRQ

(Sakal was not constrained by the “silence period” which had barred The Times of India from uploading its Modi interview two days earlier.)

But the photograph that adorned the interview on the front page was of the paper’s managing director Anand Sankeshwar holding the PM’s hands. 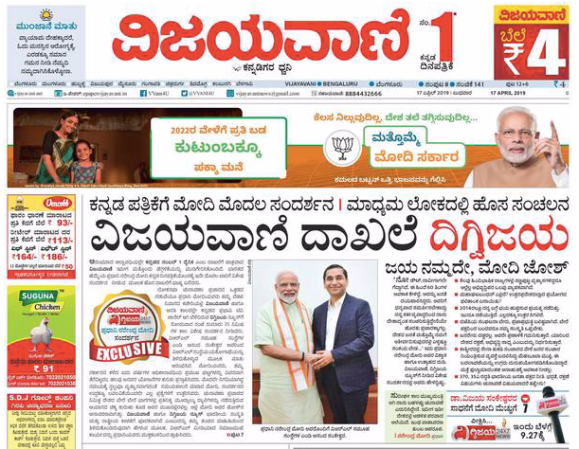 No such luck for the Gujarati daily Sandesh, the country’s first newspaper to list on the stock exchange. Neither its editor nor its owner are featured on its front page as the PM sits in glorious solitude.

Narendra Modi tweeted rather late in the day:

But, if the buzz in Ahmedabad is to be believed, nobody from Sandesh physically met the prime minister. Various members of the editorial team prepared questions which were sent to the PMO.

Answers were received by email.

This is not an uncommon practise in Narendra Modi PMO. Even giants like The Times of India have been compelled to carry emailed “interviews” of the PM with the byline reading “Team TOI”. Faceless interviewers, face babus.

It is a cliche to talk of the office of the Editor being devalued any more, but the Modi-Gandhi interviews in election season put a nice spotlight on it.

More so in the case of Modi, whose regime has been notorious for talking over the Editor’s head.

The spate of interviews also shine the light on one other uncomfortable fact: advertising passed off as news.