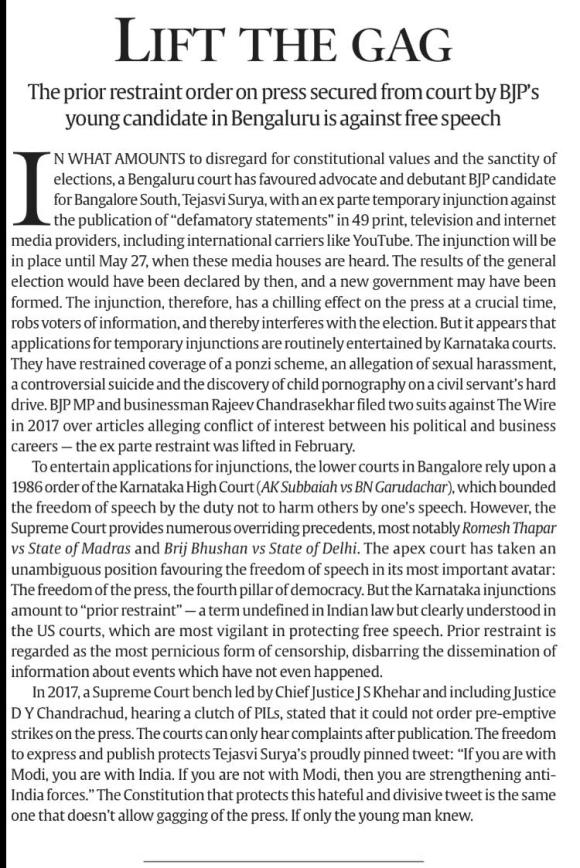 Media organisations seem so tired and bored of (repeatedly) fighting for their freedoms that not one of them has publicly raised their voice against an extraordinary injunction issued by a Bangalore court barring them from reporting on troubling questions concerning the private life of BJP’s Bangalore South candidate, Tejasvi Surya.

The only paper to have editorially commented on the issue (so far) is The Indian Express from Delhi (above), which also was incensed by the development enough to make it the second-lead in its Sunday edition (below).

On March 29, three days after he had secured the BJP’s ticket for #GeneralElections2019, Surya got the Bangalore City Civil and Sessions Court to issue a “temporary injunction” against 49 media organisations, barring them from “making any defamatory statements against the plaintiff in any manner in electronic or printing (sic) media”.

This followed a Twitter outburst by a Dr Som Dutta, who described herself as a “serial entrepreneur, investor, author and speaker”, associated with Nasscom and Bloomberg Quint. Dutta claimed she was in a “relationship” with Surya for five years. In her tweets, Dutta made allegations of sexual assault and misbehaviour by Surya.

BJP denied the charges. She later deleted her account, saying she had “moved on”.

Oddly, all this information came out in her own exchanges with right-wing social media soldiers, not from the media organisations against whom the injunction was taken out. 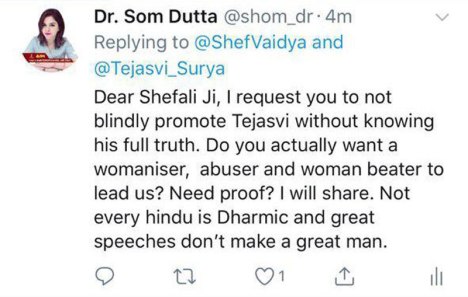 It also came against the backdrop of online discussions on Tejasvi Surya’s record of patently misogynistic and communal comments, following the announcement of his candidature overlooking deceased Union minister Ananth Kumar‘s wife, Tejaswini.

The Karnataka women’s commission has summoned Surya to appear before it on April 3 following a complaint made by the women’s wing of the Karnataka Congress after the Congress party itself had asked tersely:

“Is Tejasvi Surya an M.J. Akbar in the making?”

Oddly, nearly none of the 49 impugned media organisations had reported the private life of Surya before they received the injunction.

The Kannada daily Praja Vani captured the conversation on its website on March 27, but there is no indication that it appeared in the next day’s paper. But Surya managed an injunction against Praja Vani, and many others from what appears to be a standard list of media organisations litigants use to stifle the media.

Oddly, NDTV 24×7 is not one of the organisations on which the injunction applies.

Keen political observers say BJP sought and got the injunction not merely to prevent l’affaire Som Dutta from causing embarrassment to its candidate ahead of the elections, but also to stave off any further exposures or revelations, especially of the visual kind, rumours of which have been swirling the air.

In other words, by issuing an open-ended, blanket order (the next date of hearing is May 27, after the election results are out), the Bangalore court has ensured that, in a season of #MeToo, a candidate from a prestigious constituency from where Nandan Nilekani stood in 2014, is not subjected to media scrutiny.

The injunction is troubling in multiple ways.

The lower judiciary in Karnataka has become a fertile playing ground for politicians and others to take out injunctions against the media.

The former editor of a major national newspaper said:

“Karnataka lower courts have been notorious for such orders for many years now They have done this in a number of cases, not necessarily political. Publications have been served with such injunctions routinely even though they were not party to the original allegedly defamatory publication.”

“When the courts and the Bar are ready to circle wagons to protect one of their own from public scrutiny for misdeeds, it shouldn’t surprise when this courtesy is extended to all and sundry, specifically the rich, poor and politically connected.

“All these cases fall under the category of SLAPP – Strategic Litigation Against Public Participation – suits. The actual outcome is irrelevant to the main objective of stifling media freedom and public discourse. “

All things considered, the injunction gives an indication of the mindset of a finger-waving politician towards the media and its role in a democracy even before he formally enters office.

In this, there is great irony.

Tejasvi Surya was the lawyer for Mahesh Vikram Hegde, the so-called editor of the fake news website Post Card News, when he was arrested and jailed exactly a year ago for fabricating news that a Jain monk had been attacked by a Muslim youngster.

“This is a political witch-hunt, and it is clear that Congress workers or Congress-sponsored stooges are being used by the Siddaramaiah government to target Hegde.”

In the thick of an election battle, the freedom Tejasvi Surya wanted for Post Card News to concoct bogus stories seems to have magically vanished when it comes to media houses wanting to cover a legitimate story.