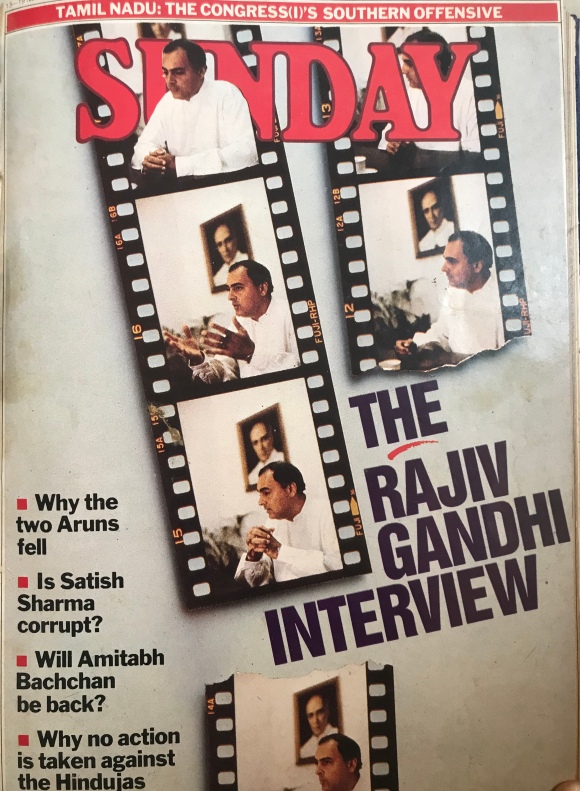 “In the first year of his prime ministership, Rajiv Gandhi was easily accessible to the press and gave candid, free-wheeling interviews. By the second year the candour was beginning to wear thin. And by the time the scandals surrounding his friends and the regime surfaced, he had retreated into his shell.”

Conducted by Aveek Sarkar, the boss ‘babu‘ of the Ananda Bazaar Patrika group which owned the magazine, and its editor Vir Sanghvi, the interview holds a mirror to the contempt Narendra Modi has demonstrated towards the media, going down as the first prime minister in India’s history not to have sat down for a proper Q&A with a proper journalist during his entire five-year term.

Or, to have had a full “live” press conference where questions, supplementaries, interjections, jousts, quips and asides follow.

As his “Mr Clean” aura faded Rajiv Gandhi too had shut himself away from the media. “The only major interview he has given to an English language publication consisted largely of written answers prepared by the concerned ministries,” the Sunday introduction notes.

The emailed interview with answers penned by faceless bureaucrats, is now standard operating procedure for Modi, whose oratorical skills are made much of.

The Sunday interview is remarkable for the kind of questions the two journalists, not particularly unfriendly to the Gandhi family, could ask a prime minister in his face—and the to-and-fro that is a pre-requisite for a thorough interrogation.

Over the 19 pages, the interviewers interject 208 times to ask a question, a  supplementary or to make a point. It’s a three-way conversation.

1.
Prime minister, you came to power with a mandate for change, for an open government in which all sorts of ideas would bloom. But just a few days back, your government banned an important book by an important subcontinental writer (Salman Rushdie’s Satanic Verses). How do you justify this action? (This question is followed by seven supplementary questions.)

2.
One of the charges most frequently levelled against you is that there is too much centralisation of power in the Prime Minister’s Office. Should the PMO be an integral part of this system? (This question is followed by five supplementary questions on PMO.)

3.
When I said you came to power with a mandate for change, I was referring to the hope that there would be a new India preparing for the next century. It’s been years since we heard you talk about the 21st century.

4.
Arun Nehru is now an important opposition leader. It would help to know why he was dropped.  (24 supplementary questions)

5.
There are reports that P. Shiv Shankar [who is effective at drafting undemocratic laws] leads a faction in your government that has been dubbed the “Gang of Four”. Can you build an India with people like Shiv Shankar? (10 supplementary questions.)

6.
Do you ever speak with Maneka or with your nephew Varun Gandhi? (8 supplementary questions)

7.
When it comes to corruption, how do Congress chief ministers compare with non-Congress CMs? Do you think Jyoti Basu takes money for his party?

8.
You câme to power with a mandate to clean the system. You were even called “Mr Clean”. Now one of the charges against you is corruption. How do you react to that?

9.
Can we talk about Bofors? Somebody must have taken the Rs 64 crore. What has the government done apart from issuing denials and giving excuses about Swiss secrecy laws? (24 supplementary questions)

Narendra Modi could be asked nearly the same questions, with names changed.

Also read: What is common to Mao, Hitler, Stalin, Nixon, Trump and Modi?