Who was the first woman to write a column, and a stridently feminist column at that, in a mainstream Indian newspaper?

Unless there were others before her in the languages, could the answer be Freda Bedi, the mother of the actor Kabir Bedi, who wrote in The Tribune, Lahore, in pre-partition India?

In his excellent new book The Lives of Freda, the BBC’s former India correspondent and historian Andrew Whitehead charts the cross-cultural journeys of the English woman who marries an Indian, fights for India’s freedom, and turns from Christianity to become a Buddhist nun.

En route, Dr Whitehead also shines the light on Freda Bedi’s close brushes with journalism, one of which was her weekly column in The Tribune in the 1940s titled “From a Woman’s Window”.

In a remarkable exposition of both the newspaper’s enterprise and the columnist’s chutzpah, Freda took up gender issues such as childbirth and breastfeeding, which the mainstream media at the time didn’t quite showcase, in her column.

In one piece for the paper’s magazine section, Freda Bedi bats for co-education, arguing:

“All healthy minded people must agree that it is best if girls and boys can mix freely socially, while keeping a good attitude towards one another.”

In a sense, journalism is a recurring theme in Freda Bedi’s life, although it is not the only one.

When she falls in love with her handsome Oxford collegemate B.P.L. Bedi and the relationship blossoms but predictably hits obstacles back home, it is a nationalist Indian newspaper Editor, visiting England for the round table conference, who backs inter-racial marriages such as theirs.

“Why shouldn’t our boys marry the best English girls, why must they always marry girls who are not in the university? I think they should get married. Why not!” are the encouraging words of Rangaswamy Iyengar, the Editor of The Hindu.

Eventually when the stars align and B.P.L. Bedi and Freda marry in 1933, they name their first child Ranga Trilochan Bedi in honour of the journalist, “because [Ranga] was the name of this great statesman who had helped us so much.”

Naturally, the news of Ranga’s birth gets a mention in The Tribune. He is now settled in Bangalore after a long career as a tea planter. 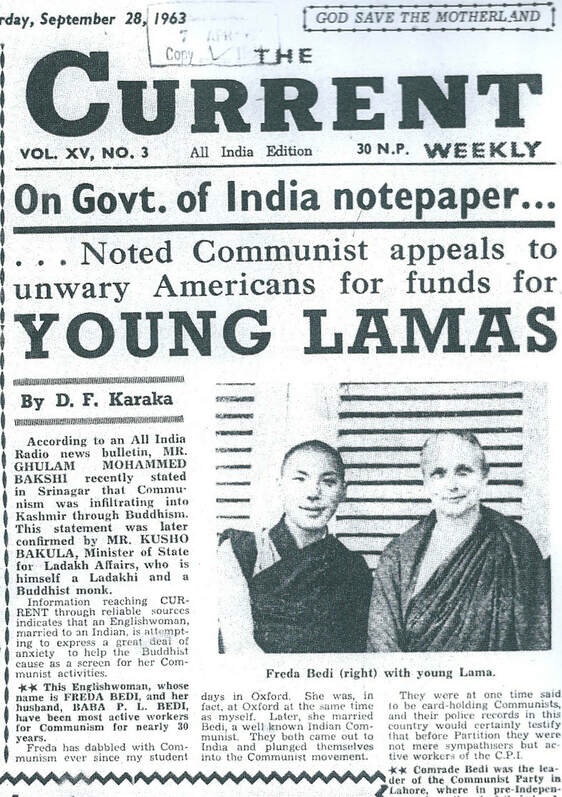 In later life, when Freda Bedi has embraced Buddhism and become Sister Palmo, she is the subject of a vicious tabloid attack, in 1963.

Her Oxford contemporary D.F. Karaka, whose anti-Nehru Current positioned itself as a counterpoise to the pro-Russian Blitz of Rusi Karanjia, mounts a full frontal, accusing her of using Buddhism to spread Communism in Kashmir.

“an English woman married to an Indian is attempting to express a great deal of anxiety to help the Buddhist cause as a screen for her Communist activities” writes Karaka under his own byline.

“Freda has dabbled with Communism ever since my student days in Oxford. The indoctrination of Sheikh Abdullah was largely to be traced to his very close association with Freda Bedi.”

For a couple labelled “Communist” by Karaka, the Bedis show admirable business acumen in Lahore.

Noticing that newspapers in the city were closed on Sundays, which meant there was no edition the next morning, Freda and her husband launched a weekly, two-sheet newspaper called Monday Morning.

“This magazine had a very profound effect, because it was very militant, totally anti-fascist in character, because anti-fascism was the wave of the time, and naturally it had to be anti-British, and it became one of the big exposure magazines. Any exposure which nobody would publish, we would publish,” Freda said.

Then as now journalists have had exaggerated notions about their reach, influence and impact, and Freda Bedi was no different. She claimed her weekly reached a circulation of 40,000 after six months, and that its rise apparently so alarmed The Tribune that the paper coerced newsagents into not selling it.

But Bhisham Sahni, the younger brother of the actor Balraj Sahni who briefly wrote for Monday Morning, was to say that the two-sheet newspaper was full of printer’s devils, and that the only redeeming feature was the enthusiasm and energy of its patriotic promoters.

Dr Andrew Whitehead’s biography of Freda Bedi is a fine lesson for journalists walking around with books in their heads.

Painstakingly researched, the book lists all the sources and resources—public and private archives; books and pamphlets; articles and journals; interviews and theses—he relied upon to tell the world something it didn’t know.

The Lives of Freda, by Andrew Whitehead