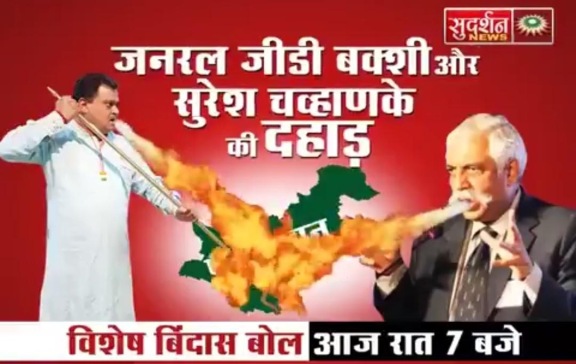 The flame-throwing, fire-spewing, war-mongering conduct of the “commando comic channels” in the recent India-Pakistan kerfuffle has attracted near-universal criticism on both sides of the line of control—and across the seven seas.

Indeed, these incursions by the TRPF (Television Rating Point Force) into the soul and sanity of the subcontinent were about the only ones not disputed by either country on February 25 and 26, 2019.

The veteran broadcaster, media critic and academic Sashi Kumar tellingly calls them the “Parasites of Primetime“:

“They are cheerleaders of hate politics and intolerance. This kind of demagogic television-manufactured nationalism has nothing to do with national interest. It is narrowly self-serving and unbecoming of the noble calling of journalism.”

However, there was a twist in the tale this time.

The saddest sight on February 26 was the mask falling off the smiling, moderate-looking anchors and  journalists like Shekhar Gupta, Rajdeep Sardesai and Barkha Dutt.

A journalist should under no circumstances become the establishment’s stenographer or a ruling party’s propaganda manager. Sadly, this is exactly how large sections of Indian media have been behaving for long—a trend that accelerated in May 2014, when Narendra Modi won a decisive mandate to lead India as Prime Minister.

Despite the baggage of Gujarat 2002 on his CV.

In the aftermath of India’s air strike inside Pakistan territory on February 26 in ‘retaliation’ to the February 14 attack on a CRPF convoy, which left over 40 Indian soldiers dead, in south Kashmir’s Pulwama district, even somewhat moderate voices in Indian television seem to have forgotten the fundamental lessons of journalism.

To say that the role played by overwhelming sections of Indian media—even by celebrated television anchors—during the recent escalation of violence between Pakistan and India, was provocative, propagandist and irresponsible would be an understatement.

In a brilliantly articulated piece that was published on Scroll.in, eminent historian and author Ramachandra Guha raised an important question:

A few years back, I coined a term for India’s jingoistic anchors: “Fidayeen Anchors”.

The biggest casualties during the recent Pakistan-India confrontation were India’s celebrated anchors and editors who revealed their war-mongering and hyper-nationalistic tendencies, on television and on Twitter.

Shekhar Gupta, Rajdeep Sardesai and Barkha Dutt proved to be the biggest disappointments.

Gupta, founder of The Print, was among the first ones to celebrate the escalation, and a possible war, on his Twitter handle.

On February 26, he toed the establishment line by showering accolades on Modi’s leadership, even justifying the violation of air space of a sovereign country, Pakistan, in a programme titled “Suicidal Pakistan should know Modi may not be scared of their nuclear button“.

“This is a very different Indian leadership. …Narendra Modi’s leadership. But he is not going to have these same responses, same pacifist responses as Vajpayee and Manmohan Singh had in the past.

“One thing we can be quite sure of is that the Modi government does not treat Pakistan’s nukes as unilateral deterrent. So they will see Pakistan’s nuclear deterrence as a bluff. They will not think twice before calling it. These are the new factors which everybody has to take into calculations,” he argued.

In a different programme on the same day, Gupta said:

“…The important thing is that Indian Air Force crossed not just the Line of Control but it looks like either the IAF or ammunition launched by them crossed even the international border because Khyber Pakhtunkhwa is not in the traditional Kashmir territory. What it means is that India has now drawn a new red line. New India has the will to escalate.”

A reference to the phrase ‘New India’ is very meaningful here. Earlier, it was used by Narendra Modi and Amit Shah as ‘Naya Bharat’.

Gupta did not stop here.

On February 26, when India officially claimed to have attacked alleged militant training centres inside Pakistan, Gupta reduced himself to a war-monger and PRO of the IAF.

The 35-year Pak Army/ISI fantasy of bleeding India with a thousand cuts, using expendable proxies as gun-fodder has ended. They have to make a hard choice now: find peace with India, or blunder into an escalatory cycle. Low-cost options are over.

In other words, a celebrated editor was issuing threats to a Pakistan, a nuclear power.

In the absence of any independently verifiable evidence regarding India’s air strike inside Pakistan and alleged damage inflicted there, Gupta took the official version of the government as a gospel truth.

He could not hide his prejudices, and also his jubilation.

On the same day, he again tweeted:

You have to marvel at Indian strategic establishment’s ingenuity at coining gentle euphemisms with deadly meaning: “Police Action” to put down the razakars in Hyderabad, 1948, “Peaceful Nuclear Explosion” for Pokharan-1, 1974, and now this “Non-Military Action….”

In a piece she wrote for Scroll.in, the veteran journalist Kalpana Sharma rightly asked:

“Are journalists anti-national if they ask questions during tense times? The answer to that is, why should journalists worry about their “nationalistic” credentials? A journalist, irrespective of personal political beliefs, is supposed to be independent, curious, sceptical and rigorous. This has nothing to do with whether they support “the nation” or even the armed forces.”

She articulated her viewpoint in the backdrop of India’s air strike inside Pakistan, violation of Pakistan’s air space, and Pakistan’s swift and audacious retaliation a day after in which the PAF not only captured an IAF pilot, but also downed an Indian fighter jet, Mig-21.

On March 1, The New York Times described the capture of Indian pilot, Wing Commander Abhinandan Varthaman as “a humiliating episode for India and a surreal week for him.”

For most Indian anchors, though, a captured pilot was an undisputed hero.

“…hyper-nationalism has infected the media to such an extent that leading television anchors took to social media to affirm their support for the Indian Air Force, as if by doing so their legitimacy would be established.

“In no democratic country with a free press, are journalists expected to sing praises of the armed forces or to bay for the blood of the “enemy” as part of their journalistic work.

“The Indian media has evidently crossed a new “Line of no Control”.”

She is not off the mark in her assessment.

She, too, showered praise on IAF without remorse:

“For 10 days I have been locked in argument with many Liberal friends who insisted that air power would never be used across the line of control. I insisted it would. #PulwamaAttack was an inflection point in life of this nation & government & #Airforce sensed pulse of people.”

Andrew Buncombe, a foreign journalist who previously wrote for The Independent, confronted Dutt and asked her:

“…But is it wise for a hugely influential, independent minded journalist to be cheering on military action by any one?”

She lost her cool and declared that India’s military action was “justice” and that she was an “Indian journalist”.

“I am an Indian journalist who cut my teeth reporting war from the front line. I have no faux neutrality about my country being engaged in a decades old low grade war by Pakistan backed terror groups. My full support to @IAF_MCC for this. This is not war mongering. Its justice,” she tweeted.

And finally, Rajdeep Sardesai perhaps thought why he should be left behind. He described IAF operation as “remarkable”.

“IAF operation deep inside Pakistan, crossing the LOC for the first time since 1971, targeting terror camps, returning unscathed, is a remarkable operation.. kudos to our brave IAF who have sent a firm message to jehadis and their sponsors..,” he tweeted.

It appeared that Gupta, Dutt and Sardesai ‘sensed the pulse’ of a billion-plus Indians and concluded that Modi would return to power in 2019 general elections, using Pulwama attack and air strike to his credit, and then they perhaps began doing last minute edits to their CVs.

Credit to Gupta and Sardesai, both of them seem to have considerably toned down their rhetoric since. Now they have tweeted in favour of peace and also reluctantly praised Imran Khan for releasing IAF pilot, Wing Commander Abhinandan.

I also do feel that after three powerful and poignant pieces written by Ramachandra Guha, Salil Tripathi and Kalpana Sharma exposed Indian journalists for their war-mongering, there has been a significant shift in the writings of both Gupta and Sardesai.

The job of a scribe is to constantly critique those in power, challenge people at the helm, and also ask tough questions of the establishment. Instead, many Indian anchors, editors and journalists were toeing the official line and supporting Narendra Modi-led government in a mission to escalate tensions.

Mind you, as a child and later as a student of journalism I would quietly admire Gupta, Dutt and Sardesai and think of them as ‘fair, moderate, balanced and objective’ journalists who aspiring journalists should emulate.

Once I became a journalist and understood my roles and responsibilities, I still gave them a benefit of doubt and tried to understand and comprehend their professional predicament when it came to reporting or commenting on the Kashmir dispute. Their silence or justification of war crimes in Kashmir made me angry.

The irony of all ironies is that the trio invoked Geneva Convention and international law with regards to how the captured and now released Indian pilot was treated by the Pakistani Army or how his video was shot there. They never invoked Geneva Convention, international law or UN Charter when they romanticised, rationalised, justified and glamorised war crimes in Kashmir by the Indian Army.

For instance, when a civilian Farooq Dar of central Kashmir’s Budgam district was tied to the bonnet of an army jeep by disgraced Major Gogoi, and then paraded for several hours through villages during parliamentary by-elections in 2015. Shamelessly, they showed the pictures of Farooq and held prime time debates, arguing why this human rights violation and a war crime was important to teach a lesson to protesting stone-throwing youth in Kashmir.

They did not invoke Geneva Convention when 18-month-old baby girl, Hiba, was hit by pellet guns in the Kashmir Valley. They never spoke on extra-judicial killings, fake encounters, mass graves, unknown graves, custodial disappearances and other human rights violations in Kashmir.

Worse, Dutt described a damning UN report on worsening human rights situation in Kashmir as “airy fairy” while Gupta said it was “motivated and malicious.”

Since the ascendancy of Modi to power in May 2014, there seems to have been a mass conversion (ghar wapsi) among journalists in India barring reasonable exceptions like Ravish Kumar, Karan Thapar, Siddharth Vardarajan, Salil Tripathi, Ajai Shukla among others.

Credit is due to Arnab Goswami, Rahul Shivshankar, Navika Sharma, Gaurav Sawant, Rahul Kanwal, Anjana Om Kashyap et al for they do not wear any masks.

They always sound genuine and original and do not masquerade their hatred for Kashmir, Kashmiris, Pakistan, Pakistanis and Muslims on prime time shows. They always bat for war; they are for smoking out Kashmiris.

We know them so well. Their audience also knows what they are.

What has, however, changed since 2014 is moderate-looking, smiling and patronizing Indian anchors shedding their masks; one by one. Over the years they have justified the worst human rights abuses in Kashmir.

Shekhar Gupta, Rajdeep Sardesai and Bark Dutt should bow before Arnab. Arnab is their undisputed leader and the formerly ‘liberal’ anchors are cheer leaders of the war.

Sadly, they failed to show restraint and grace when it mattered the most!

Chevening fellow and Munich Young Leader, Gowhar Geelani is a broadcast journalist, political analyst and commentator,  based in Srinagar. For several years he served Deutsche Welle (Voice of Germany) as editor in Bonn, Germany. His work has appeared on BBC, Dawn, CNN News18 among other media outlets.

NDTV India’s Ravish Kumar has a message for war-mongers