As India hurtles inexorably towards fulfilling the wet fantasies of idiots itching for action against Pakistan after the deadliest attack in 30 years of militancy in Kashmir—under Narendra Modi‘s magisterial watch—the contours are being framed.

NDTV’s excellent London correspondent Radhika Iyer has described an experience from last night, and it gives a foretaste of what is to come, as the battleships are readied to cover up the massive failure of the Modi government, and to manufacture consent for possible action ahead of the 2019 general elections.

“As a journalist, you can well imagine how unpredictable, challenging and emotionally very taxing some days at work can be. Like for anyone else in their own work place.

“I have been reporting for the last fourteen-and-a-half years. Much of it in broadcast journalism as you know. During terror blasts, tsunami, cyclones, air crashes, train accidents, political crises, during day, during night, weekends, festivals, during the week of my wedding, during treatment for cancer.

“Today, though, was particularly challenging. And hurtful.

“I was at a protest march by some Indians in London against the gruesome terror attack in J&K in India. I was among the first to reach and started filming on my phone. I interviewed some people, then recorded visuals.

“When, suddenly, the crowd cornered me.

“Hooted me for being associated with NDTV.

“One lady said, ‘You cannot be here’. One man said, ‘If you are an Indian, then say Bharat mata ki jai. The rest kept bullying and shouting slogans whenever I started to film, preventing me from doing my job.

“This was a protest by Indians and people of Indian origin. Against terrorism. Even against Pakistan. When suddenly in the middle of it, the focus was on me and the media channel I am associated with. I felt cornered, vulnerable and isolated amidst so many of my own fellow-Indians! Some who are well known to me.

“Like Sushil Rapatwar who stood opposite me smiling and joined the hooting, but not long ago invited me for coverage of the Maharashtra Mandal’s set-up for a show I host in the UK on NDTV.

“Like Lalit Sharma who invited me but wasn’t around when I was looking for him.

“And so many others who did nothing to comfort me or help me out of the mob like situation there.

“If you don’t like NDTV, don’t watch it, or don’t give an interview. If you want to raise concerns, speak to me or ask me who you should be writing to if it is not my report you have an objection with. Why stop a person from doing his/her job?

“Mahender Jadeja reached out, so did fellow camera colleague Vineet Johri. Thank you. I am fine now and back at work! For most time, though, I stood there as an Indian, feeling absolutely helpless and let down by my fellow Indians for simply being there to do my job.

“I stood alone—as a woman, as a journalist, as an Indian—on duty.” 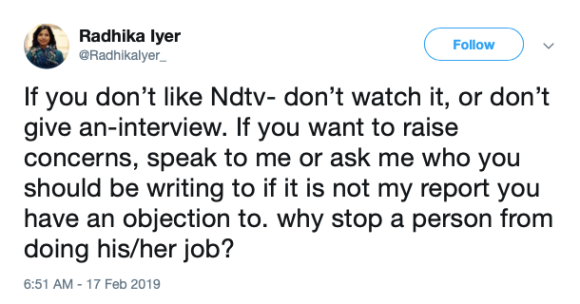 That’s incorrect ma’am. I was there, very few people shouted against NDTV that I agree but didn’t hoot at you. @India_Policy pic.twitter.com/fQFob8nsPA