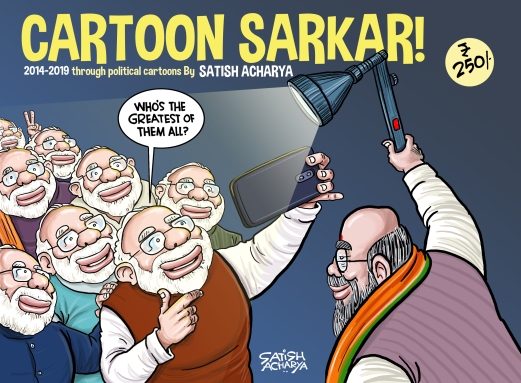 Although the Mysore-born R.K. Laxman is the best known of them all, it is Kerala that has produced more political cartoonists in the English language: P. Shankar Pillai, O.V. Vijayan, Abu Abraham, Kutty, Unny, Ravi Shankar, Ajit Ninan et al.

In recent years, Satish Acharya has joined his Kannadiga torch-bearer as a political cartoonist of promise, his works first adorning the Bombay afternoon paper, Mid-Day, and now a number of newspapers and websites across the country.

As India heads into general elections, Acharya has two new books of his cartoons during the last five years. Titled ‘Cartoon Sarkar!’ and ‘Hum and Them‘, the covers capture the challenges of cartooning in the time of social media.

The Bombay radiologist, quizzer and cartoonist, Hemant Morparia, has a foreword.

Acharya, 47, now based in Kundapur in coastal Karnataka, speaks of his art and craft ahead of the launch of the books.

Q: When and why did you feel like becoming a cartoonist? How did you start?

Satish Acharya: During my school days, I was fascinated by the story-telling power of illustrations in Amar Chitra Katha books. Then the cartoons of R.K. Laxman and Mario Miranda which used to appear in The Illustrated Weekly of India attracted me. I started copying them religiously. Gradually I developed my own drawing style.

In college, I used to send pocket cartoons to Kannada periodicals like Taranga, Tushara and Sudha. After many failed attempts, my first cartoon was published in Taranga. I was paid Rs 25 for my effort!

I continued to contribute pocket cartoons to Kannada magazines and earn my pocket money during college days. But I never considered taking up cartooning as a profession. As I hailed from a lower middle-class family I knew that only a good job could change our financial situation and cartooning in Kannada didn’t hold any promise.

After completing B.Com., I did my MBA and started hunting for a job in Bangalore. During one of these interviews, the interviewer, after observing my keen interest in cartooning, told me, ‘Anybody can do MBA, but not everybody can become a cartoonist’. That line prompted me to look at cartooning seriously.

After failing to get any suitable job in Bangalore I moved to Mumbai. And it was in Mumbai that I realised that cartooning could be a profession. I started freelancing for some newspapers and magazines while working as a client servicing executive at an advertising agency. But I couldn’t focus properly on either of them. So, I had to take a tough decision to pick up cartooning as my profession.

But it took me almost 10 years to get a break as a professional cartoonist. In 2003, I got a break at Mid-Day, as a graphic designer and illustrator.

Aakar Patel was my editor. Basically I was doing graphics and illustrations, and making pages at Mid-Day. But my ambition was to become a cartoonist. I started doing small cartoons and sent them to Aakar and the newsdesk team. They started printing them along with readers’ letters. Luckily Aakar saw some potential in me as a cartoonist and offered a regular column in Mid-Day. 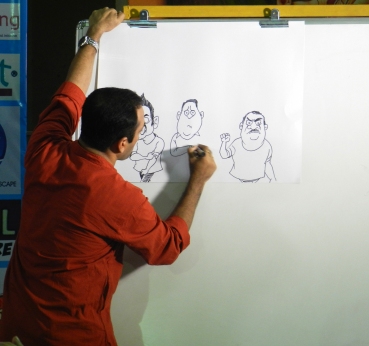 Q: How do you go about creating a cartoon? What is the inspiration? Does the line come first or the cartoon?

Satish Acharya: I call myself 24×7 cartoonist. Though the actual time spent in creating a cartoon is just 40 minutes to an hour or two, the hunt for ideas continue through the day. I keep reading news portals, scurrying through social media (especially Twitter) and pick the most interesting talking point of the day. Most times, a news development prompts a cartoon idea. Sometimes I feel strongly about an issue and start brainstorming.

On most days, I draw around 2-3 cartoons. On some days ideas flow fluently and some days are hard. When there’s a good cartoon idea, it makes me restless till I complete the cartoon. It’s like labour pain!

News is always the inspiration. Some quote, some visual…anything can trigger a cartoon idea.

I used to draw with brush and ink when I started, then moved to pen and ink and later sketch pen/marker. Now I use Wacom Cintiq to draw cartoons directly on computer, though I still practice with freehand sketching.

Most of my cartoons are now published on news portals, where I get more freedom and face less interference. Sify, One India, Star of Mysore, Newssting, Sportstar, Sports Illustrated, Udayavani etc are some of my clients.

Q: Who are your favourite characters? Who do you find easy to draw—and difficult? Is it easy drawing women for you?

Satish Acharya: Mostly the politicians who are always in news become regular characters in my cartoons. And you get used to them. Presently Modi, Rahul, Shah are my favourites. When you start with a new face, you struggle to simplify the face to fit into political cartoons. But gradually you succeed in creating your own stylised character sheet for different characters.

I always found drawing Nitish Kumar little difficult. Every time I drew him, he appeared more like Vajpayee!

Drawing pretty faces is a little tough, so women are difficult until you draw lots of their sketches. But every face has a prominent feature which readers identify with and cartoonist latches on to it.

Q: What, to you, is the role of an editorial cartoonist in journalism? Whose works do you admire in India?

Satish Acharya: A cartoonist’s comment is as important as the editor’s comment in a newspaper. If you take up any newspaper, you will find that the cartoonist delivers the most independent voice, consistently. An editor might be handicapped by the paper’s stand, but a cartoonist has no such obligation.

I’m a great fan of cartoonists like Sandeep Adhwaryu (The Times of India), Surendra (The Hindu), Dr Morparia (Mumbai Mirror), Manjul, P. Mohammad. Each of them is so distinctive and so consistent.

I’m regularly in touch with most of them, and they inspire me every day.

Q: Is it easy being a freelance cartoonist? What kind of pressure do editors impose on you? How do you react to criticism from readers and trolls?

Satish Acharya: It’s tough being a freelance cartoonist. Though I have established my name in this profession, I still face uncertainty. Money-wise it takes some time to quote your own price. But the biggest problem is not getting paid. Some journalists promise you payment, but cheat later. As you don’t always start with a contract, they misuse the trust.

Fortunately, I live in the small town of Kundapur (after relocating from Mumbai), so my needs are limited and I can survive even without some clients.

I must say, most of my clients give me enough freedom and mostly they don’t interfere. Though I’m open to debate and changes, there have been uncomfortable situations, where editors tried to modify my opinion and I resisted. Once I resist, I realise that my days are numbered. Most of the times, they end the association abruptly.

I welcome criticism as it helps me get out of my comfort zone. But in the last five years, criticism has been replaced by whataboutery! They are getting abusive, personal and threatening. Initially these things shocked me. And the silence of audience was uncomfortable. But during the last three-and-a-half years I see that readers are standing with cartoonists to protest against trolls. Cartoonists are getting lots of support from readers on social media. It gives lots of hope, and fill you with courage.

Earlier I used to react to some of these trolls, but then I realised that they are doing a ‘job’ and I just need to focus on my job. So, I ignore most of them as if they don’t exist.

Since they work as a gang. Once they pick a target, they abuse, threaten, disrupt social media pages, try to instill self-doubt etc. Their intention is to stop you from creating your next cartoon. But I end up doing two more cartoons! 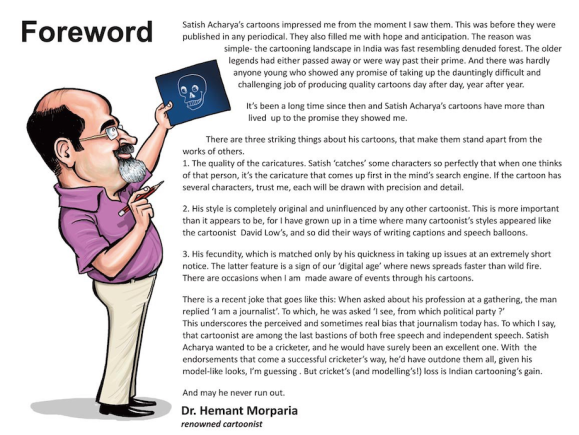 Q: Why did you decide to do these books?

Satish Acharya: In 2014, just before the elections, I published a book titled, ‘Mein, Hum & AAP’. That book was an attempt to chronicle the political developments leading to 2014 general elections. It was liked by many. That election was a crucial one, after Anna Hazare‘s movement.

I feel 2019 is going to be another crucial election for Indian democracy. I thought I must come up with a book to record this journey from 2014 till the elections. I ended up picking around 200 cartoons, so I had to go in for two books.

On social media normally some readers judge a cartoonist looking at one cartoon. They don’t look at the body of works. A book of cartoons is an opportunity to showcase the different perspectives.

Q: What is your advice to a young person wanting to do cartoons for a career?

Satish Acharya: During my college days, I had sent a letter to R.K. Laxman briefing him about my passion for cartooning. I received a reply through his secretary. Laxman advised me to focus on studies. Later I realised the meaning of that advice.

Being passionate about cartooning is good. But you need to support your passion with lots of hard work. Your education, your reading and your interests play a crucial role in your ideas. And for me, an idea is more important than the drawing part in a cartoon.

Work on your drawing skills, without worrying about the digital tools or software. But you should be open enough to build your opinion through lots of studies, reading and also through different perspectives.

Buy directly from cartoonistsatish@gmail.com or through PayUMoney