Somesh Jha appears on Barkha Dutt’s ‘Democracy Live’ programme on the newly launched ‘Harvest TV’, on the day he broke the NSSO numbers on unemployment in ‘Business Standard’

If you haven’t achieved something of note by 30 you never will. Check. 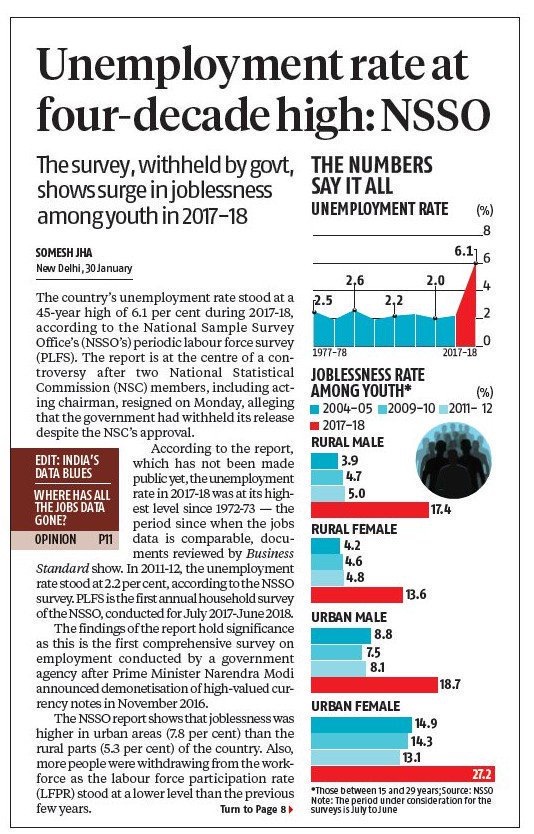 On the death anniversary of the greatest Editor-in-Chief to have walked this planet—Mahatma Gandhi, if you must ask—it took just one story by a 27-year-old, who wasn’t born when India introduced reforms in 1991, to overturn all those axioms.

By breakfast, on January 31, 2019, Somesh Jha was the toast of Twitter. By lunch, sarkari trolls and technocrats were eating holy crow. By dinner, he was on every non-government TV news channel lifting his finger to order desserts.

The stickiness of Jha’s story—of unemployment being at its highest in 45 years in 2017-18, the year after the most debilitating decision in India’s post-independence economic history, #Demonetisation—straightaway affirmed the value of print journalism.

In the shallow waters that mainstream media has trudged in during the 56 months of Narendra Modi, there have been a few big magazine and web stories (#JudgeLoya, #BetiUthao, #Rafale) but none have had peers falling over each other to cover them.

That Somesh Jha’s scoop came in the Kotak family-owned Business Standard was another small surprise.

Although BS was top-of-the-mind reading for a prime minister who read newspapers—Manmohan Singh, if you must ask—the pink paper is known more for its views than for agenda-setting news.

Moreover, BS promoter Uday Kotak only recently allowed himself to be appointed by the Modi government to provide a soft crashlanding for the bankrupt lender IL&FS even while he was engaged in a noisy slug-fest with RBI on cutting his stake in his bank. 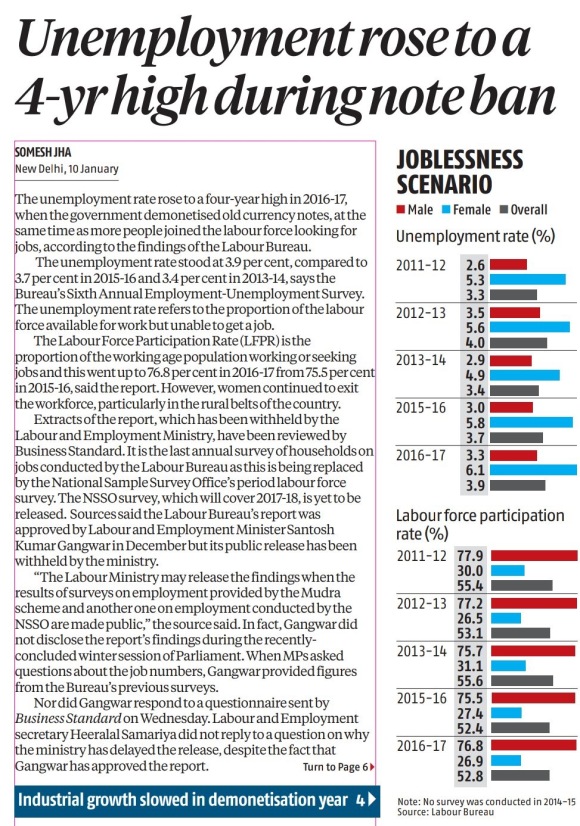 The Labour Bureau report on unemployment ‘Business Standard’ of January 11

Twenty days before scooping the NSSO data, Jha had provided a slice of what was to come when he had again shown that unemployment, the big issue in #GeneralEletions2019 according to multiple opinion polls, had peaked after #DeMo.

And, like so many millennials who do not carry the baggage of Lutyens Delhi, Jha had the chutzpah to take on cheerleaders who earn their dal and makhni bad-mouthing those who have the temerity to point out that the emperor has no clothes.

When an Indian Express humourist who served on Modi’s economic advisory board, and an Infosys “malcontent”, questioned the Labour Bureau numbers by hurling epithets like “bogus”, “voodoo economics” and “fake news”, the young journalist had a ready comeback:

Part three of Somesh Jha’s series on joblessness, in ‘Business Standard’ of February 4

In all, Delhi-born Somesh Jha—who was picked up by Business Standard in 2013 from IIMC Dhenkanal (Orissa), and spent a couple of years at The Hindu before moving back to BS in 2017—has delivered three big stories on the unemployment situation.

As the data journalist Rukmini Srinivasan points out, they haven’t been credibly countered, five days on. And the economist Mahesh Vyas says he has no doubt that the BS numbers are indeed NSSO’s.

Jha covered aviation, AAP, environment and labour in BS in his first stint there; labour and transportation at The Hindu. Back in BS, he now now covers banking and labour.

Somesh Jha (centre) with his classmates at IIMC Dhenkanal, in Orissa

Q: When did you pitch your big story on the National Sample Survey Organisation (NSSO) numbers to your editors?

Somesh Jha: The story was published on the same day I pitched it.

Q: How did you smell the story?

Somesh Jha: It was in early December (2018). One of my sources told me that the NSSO report on unemployment and employment had been approved by a government-appointed panel and that the numbers were looking bad for the ministry of statistics to release it.

But within minutes, there was another major development unfolding in India’s economic sphere: RBI Governor Urjit Patel had put in his papers.

Since then, I had been chasing this story until one day we got to know from sources that the National Statistical Commission members and its chairman had resigned. And the worst fear came out to be true, indeed.

Q: What was the most difficult part of doing these stories?

Somesh Jha: The chase. It is unprecedented that in India a survey report of this magnitude has been leaked out in the press before being released in the public domain. This is essentially because the NSSO has never withheld such datasets, as there is a set oversight mechanism in place.

This was supposed to be the most-awaited datasets on employment generation under the present government’s tenure but unfortunately they were suppressed as the figures might not have been comfortable for the government which had come to power in 2014 promising millions of jobs for the youth.

It has been several days since we first published the story. Even as of now no other media organisation has been able to get their hands on the survey report. So, we can assume the difficulty in assessing the report.

Q: Where there were pesky phone calls to stop the story or to lay off?

Somesh Jha: To my surprise, there haven’t been any phone calls from the goverment at all. And the government hasn’t denied the findings of the report till date.

Q: How important was this story and the numbers it threw up?

Somesh Jha: This is the most important economic and political story in the country. There have been signs of joblessness in the country since the past few years but, as the government has itself admitted, there was no comprehensive survey to establish job numbers. Now, when we have the figures, the government isn’t willing to release them as it doesn’t suit their narrative, bringing more attention to this story.

Q: You have been a journalist for just a little over five years. What, according to you, is the role of journalism in 21st century India?

Somesh Jha: Journalism is the fourth pillar of our democracy. Our role as journalists in the society is to inform the public about the truth and hold authorities in power to accountability. This is the burden of society that journalists carry on their shoulders.

Our role has become more important than ever in today’s world where the flow of information is at top gear due to social media. There is both misinformation and disinformation being fed to us on our mobile devices at almost every moment, and we need to inform the public about facts.

Journalism is not for those who seek favours from those in power. It is for those who can do a favour to the society by informing them about the truth in an unbiased way.

Q: How important was IIMC in your life?

Somesh Jha: IIMC was useful in the sense that it gave me a jumpstart to my journalistic career. The best part about studying in an institution such as IIMC is that reputed media houses come to the campus for placement. It is almost impossible for a student to get off-campus placement these days. Moreover, IIMC helped me in understanding the importance of meeting deadlines. Nothing is more important in journalism that sticking to your deadline.

Otherwise, IIMC Dhenkanal needs more regular faculty and full-time professors, along with a wide range of professionals as guest faculty. The ever-changing nature of journalism needs special attention and students need to learn from experiences of people who are part of an integrated newsroom.

And it is important for the government to ensure IIMC remains an autonomous body insulated from political pressure. The faculty and staff need to have a liberal mindset and approach towards students.