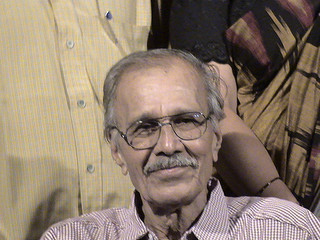 Journalists see plenty of disease, despair and death in the line of duty. Even if we do not entertain prospects of immortality, our near-constant exposure to the dark and grim side of life somewhat inures us to its only certainty.

But what when it hits home?

Krishna Vattam, for 40 years the Mysore correspondent of the Bangalore-based dailies Deccan Herald and Praja Vani, has been there, done that—and survived to tell the tale.

In a new book, Joy of Conquering Cancer: A Spiritual Dimension, to mark the silver jubilee of his triumph, cancer-survivor Vattam describes how he heard the bad news 25 years ago, and what happened thereafter.

It was a hot day in the summer of 1990. A professional errand to a cancer detection camp, a chance stroke of luck, which brought unexpected and ever unsuspected developments, led me and my family to live through nearby a three-year period of agony, trauma, anxiety and uncertainty.

Call it a freak incident, an ordain of God or the graciousness of the Almighty – if I had skipped this visit to attend a far more important engagement, important from a journalist’s perspective, I wonder what would have happened and whether I would have been able to catch cancer in time and outwit the disease before those deadly cells had grown up to trip me into the abyss of no control, giving me no opportunity to look back and share my experiences with you today.

When I stepped out of my house on that sunny morning in the first week of April 1990 to attend the cancer detection camp, I least suspected that I was going there with the disease in my being.

The Bangalore–based Kidwai Memorial Cancer Hospital, in an outreach programme, had organized the camp in Mysore in the expansive Nanjaraja Bahadur Choultry and it was the first of its kind in this city.

Bharath Cancer Hospital, which owes its existence to the vision of B.S. Ajai Kumar, an NRI Doctor, was opened in Mysore a few months after the Camp was conducted.

The local Jain community had sponsored the medical camp and medical practitioner Dr. Prasanna Kumar, an assistant professor at the JSS Medical College, who was a leading member of the community and my close friend, came to my residence and invited me to give the inaugural function of the camp.

He requested me to give a good coverage of it in the Deccan Herald, the leading English daily in Karnataka, which I was privileged to represent as its Mysore Correspondent.

A good number of people from the city and surrounding villages had registered their names at the Camp for getting examined, and it turned out to be that the ailments many of them were suffering from were unrelated to cancer.

There was a formal inaugural function of the Camp for about 45 minutes and after that the doctors dispersed to examine the registered camp attendees.

I do not call them patients, as in the strict sense of the word they were not. They had come to consult, since such free health check camps were rare in those days. It mattered little to them, whether the consultants they were seeing were oncologists or general practitioners, but, in their opinion, they were all doctors who could attend to any kind of ailment. I spent some time in the examination rooms.

I saw my friend Nissar Ahmed Shariff, a very good footballer, coming out with his mother from one such room, looking very depressed. As he saw me, he could not control his emotions and with tears rolling down his cheeks, he told me that the doctors suspected that his mother had cancer.

I was also moved and placed my right hand on his shoulder and comforted him saying “Don’t worry, God is with you”. Then he stepped forward and addressing his mother, who was standing behind him, with folded hands, said “Maaji, Ooperwala hai.”

It was easy to console and comfort others but when it comes to oneself, how helpless and distraught one could be, I realized very shortly thereafter.

A big printed pamphlet hung around the huge column of the Choultry building, caught my attention. This poster, which was printed both Kannada and English was one such public information in nature, asking people having those symptoms to get examined in the camp.

One such symptoms was “difficulty in swallowing”, I noticed.

It nearly shook me off the ground.

Yes, I had been experiencing this problem for some time now.

It was around November 1989, about six months before this camp, I was attending the South Zonal Conference of the INTACH Conveners at Cochin, Kerala, as the Convener of the Mysore Chapter of the Indian National Trust Fort Art and Cultural Heritage.

As I was having lunch, I found it difficult to swallow the cooked rice. I stopped eating and set aside my plate in the basket meant for used dishes.

This did not worry me for after my return to Mysore. I felt normal and was able to eat without any difficulty.

But in February 1990, I experienced a similar problem while I was returning from Varanasi after participating in the National Conference of INTACH Conveners, I bought some oranges at the Varanasi Railway Station.

Once seated in a compartment I leisurely peeled an orange and put a small piece into my mouth and found I could not swallow the chewed orange. I went into the toilet compartment, thrust two fingers in my mouth and forcibly vomited the orange stuck in my gullet.

I felt relieved physically but I was worried. On my return to Mysore, I consulted a few ENT specialists and x-ray was also taken during the course of their examinations. None of them could detect anything abnormal. I felt reassured.

When I noticed “difficulty in swallowing” on the pamphlet at the cancer detection camp at the Nanjaraj Bahadur Choultry at Mysore on that day, as one of the symptoms of cancer, I began worrying.

Just a few minutes before, I had infused a sense of confidence in Nissar Ahmed and his mother I found myself in a state of shock now.

A press reporter who went to cover the inaugural function of the cancer detection camp got examined on realising that he too had one of the symptoms of Cancer. Here too the doctor who examined him assured that his difficulty in swallowing my not necessarily be related to cancer. He suggested having an x-ray taken in the mobile unit which had been brought along with the medical team from Bangalore.

The general human tendency is not to think of the worst and the words of the doctor that my problem may not be related to cancer as such, and his encouraging words, “Not to worry”, lulled me, so much so, that that I did not bother about my visit to the camp or about the x-ray in the days that followed. I was attending to my duties.

Ten days later at about 10.30pm the telephone rang at my house.

I took the receiver and heard “Is it Krishna Vattam”, a voice enquiring from the other end. “Yes, speaking”, I replied. “Vattam Saab, take it easy. From the x-ray that was taken in the camp, the doctors suspect it to be cancer. You have to go to Kidwai Hospital tomorrow,” the speaker at the other end informed me.

The word sounded like a death warrant to me. Even as he was speaking, I instantly began to experience shock waves passing through my body.

Like a paralytic, I felt that my legs were benumbed.

I could not stand and felt that I was being pushed down.

I squatted on my haunches still holding the receiver in my left hand.

I had not informed my mother or Kamala, my wife, about my visit to the cancer detection camp and the x-ray that was taken there.

I had felt that the change situation of the unintended “checkup” did not call for the family members being informed. Further I had thought that any such talk may unnecessarily lead them to worry about my health.

My mother, who was sitting on the cot next to the table on which the telephone was placed, jumped out and rushed towards me crying out, “devare” (oh God) as she saw me sink on my knees with the receiver in my hand.

Kamala, who was resting in the adjacent room, rushed to me, and I heard both of them, amma and wife, anxiously asking me over and over again, “What happened?” I babbled in a voice that faltered, “They say I have cancer.” These five words uttered by me made them feel that the world around us had collapsed.

I rested my head on the mother’s bosom just as I would have done as child after suckling, although the situation faced on that day by a 57-year-old son and his 82-year-old mother and suckling child of its young lactating young mother were of two different nature.

After all, the bond of a mother and a son in the same at all times. Kamala rested her head on my neck, and all of us were weeping. When Shyam, my son, returned home from Times of India office, where he was serving as a reporter of the paper, he found us all weeping.

Kamala was the first to break the news to him. He went out of the verandah, sat on the granite bench within our compound, and was sobbing silently.

Shortly, thereafter, amma and wife went out and began consoling him. “Our Lord Narasimha is there. Appa has done no harm to anyone. He will never let us down,” I heard my mother reassuring her grandson.

The beds for all of us to sleep on that night were spread out in the “hall”, the living room as it is known in common parlance in some parts of South India. None of us could sleep throughout the night. All of us had our eyes glued to the ceilings as we anxiously contemplated the future that had suddenly begun to look uncertain.

I held amma’s hand with an intense feeling of an assured protection and safety from her as I would have done as baby scared of ghosts.

In this confused and disturbed frame of mind, eager to avoid brooding over the call I received just an hour ago from Kidwai Hospital informing me about the suspected cancer in me, I began to reflect, as it were, on the tryst I had with destiny, the path I had followed throughout my life till then.

(Excerpted from Joy of Conquering Cancer: A Spiritual Dimension, published by Darpan, an imprint of Prism Books, Rs 125)

Also read: ‘You can’t be a bad person but a good journalist’