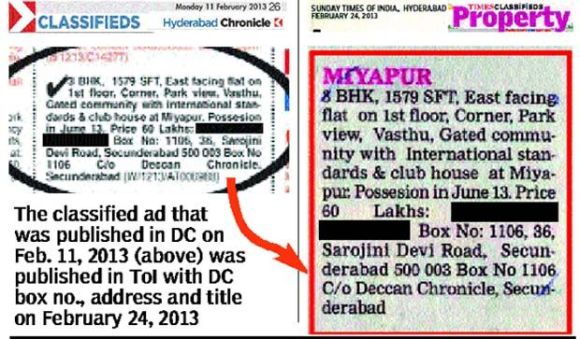 Nothing is impossible in the merry world of Indian journalism.

But at least there’s a word for it: plagiarism. What’s the equivalent in advertising?

In a first, the embattled Hyderabad newspaper Deccan Chronicle has accused The Times of India of stealing its “classified advertisements” and passing them off as its own.

Deccan Chronicle says between January 2013 and June 2013, nearly 1,000 such classifieds which first appeared in DC also appeared in ToI.

DC now has filed a criminal complaint against ToI.

For the record, Deccan Chronicle has been under attack from ToI in the Hyderabad market for the financial sins of its promoter, T. Venkatram Reddy.

Also, for the record, Hyderabad is the one city where ToI has not managed to make great headway. After 14 years of publication, one recent issue of the newspaper in September had 16 in-house advertisements.