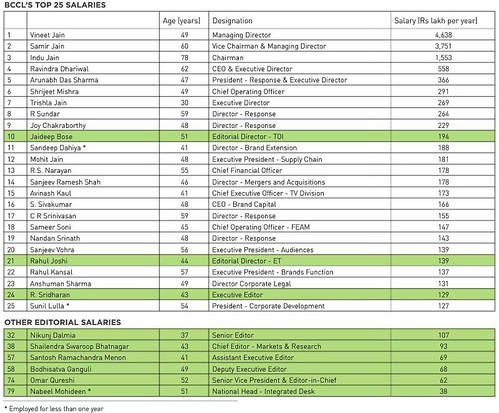 The latest issue of Caravan magazine has more than just the story of former Indian Express editor-in-chief, Shekhar Gupta.

There is a fine profile of Eenadu bossman Ramoji Rao, and there are interesting numbers in a data analysis of the big newspapers by howindialives.com.

One of the charts (above) in the latter story is how the country’s biggest, most profitable media house—Bennett, Coleman & Co Ltd—pays its staff.

The numbers show how, of the 81 employees whose 2014 salaries were disclosed to the ministry of corporate affairs by BCCL, only nine of them were of editorial staffers, all the rest being on the business side of the group.

“Even without including the salaries of the group’s proprietors, the Jain family—Samir Jain and Vineet Jain, their mother Indu Jain, Samir’s daughter Trishla Jain and her husband Satyan Gajwani—business salaries still constituted 89.5 per cent of this part of the payroll.”

Through the Shekhar Gupta profile, we learn that The Times of India‘s editorial director Jaideep “Jojo” Bose earns under Rs 2 crore a year and the paper’s outgoing CEO Ravi Dhariwal earns about Rs 6 crore.

Shekhar Gupta as the CEO and editor-in-chief of The Indian Express earned more than JoJo and Dhariwal put together: over Rs 9 crore per annum.

Asked by Krishn Kaushik, the author of the Caravan profile, Shekhar Gupta says:

“Maybe you have to blame my employers for being too generous. [I decide the salaries of my subordinates] but someone else decides my salary. I work on that basis. And whoever decides has to make a calculation on what he’s getting, and if he’s being overly generous then it’s a question for him, not me. My job is to earn money, work as hard as I can and pay taxes.”

For the record, The Indian Express claimed a 2013 circulation of 400,000 copies before the Registrar of Newspapers in India (RNI) and TOI declared over 4,700,000 copies.