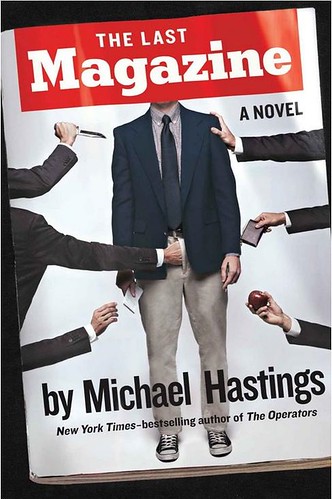 DILIP CHAWARE writes from New Jersey: The Last Magazine is Michael Hastings’s novel which has been published a year after his death. This controversial young journalist, who worked for Newsweek as a war correspondent, died last year in a car accident in Los Angeles when he was just 33.

Very few were aware about this book, which was resurrected from his laptop.

The novel, though, is a portrayal of real life within a major news organisation, the nexus between the government and the media and broadly discusses the relevance and future of the print medium.

Hastings is back in the news owing to his Rolling Stone article published in 2012, surrounding the recent release of Sgt. Bowe Bergdahl by the Taliban. The article dealt with Bergdahl’s army platoon.

Various references in the novel The Last Magazine clearly identify its main players.

The character of Nishant Patel is in fact Fareed Zakaria, then international editor of Newsweek. Patel is painted as having a mega ego.

Patel and Berman vie with each other to appear on television.

Both want to be visible and compete to write cover stories for Newsweek.

Hastings captures a turbulent period of half a decade, beginning 2002. It is a difficult time for a sensitive journalist and centres on the war with Iraq.

Hastings implies by innuendo that the news media in the US collaborated with the government while covering the conflict. He lampoons all and sundry, based on his firsthand experience as a frontline war correspondent.

Hastings lost his girlfriend Andi Parhamovich, who was killed in 2007 when her convoy was ambushed in Iraq. She was an aid worker. He wrote a book I Lost My Love in Baghdad, based on that experience.

His second-last book, The Operators was published in 2012. It is about the US military presence in Afghanistan. That book was a result of an article Hastings wrote in Rolling Stone.

The incisive article proved to be the death knell for the career of Gen Stanley A. McChrystal, the US supreme commander in Afghanistan.

Hastings worked as an intern in Newsweek for a year 2002-3. This was the time the US escalated its war with Iraq. This was also the period when the electronic medium was seen overshadowing the print medium.

The Last Magazine deals with a professional’s dilemma and the dejection he felt due to the decline of professionalism of the print medium. His grim predictions proved too true in the case of Newsweek, which had to fold up.

His wife Elise Jordan was instrumental in publishing the unfinished novel on the first anniversary of his death. Hastings was 25 when he first went to Baghdad.

Due to the death of Andi Parhamovich, he was diagnosed of suffering from a post-traumatic stress disorder. Jordan, a Yale graduate was a speechwriter for then Secretary of State Condoleezza Rice. She was an avid advocate of war against Iraq.

Hastings and Jordan’s courtship started in 2010 in Kabul. While he was working on the McChrystal article, she was on a freelance assignment a magazine. They married in 2011.

Hastings died at 4.20 am last year on June 18 as his Mercedes crashed into a tree in Los Angeles. His death became grist for the conspiracy theorists for some time. But the coroner declared that he had marijuana and trace methamphetamines in his blood.

Hastings is no more but the debate he unleashed rages on.

(Dilip Chaware is a former journalist with The Times of India, Bombay)

Also read: Will this man be the next US secretary of state?

Fareed Zakaria: a barometer in a good suit

Iran to China, Newsweek has the world covered