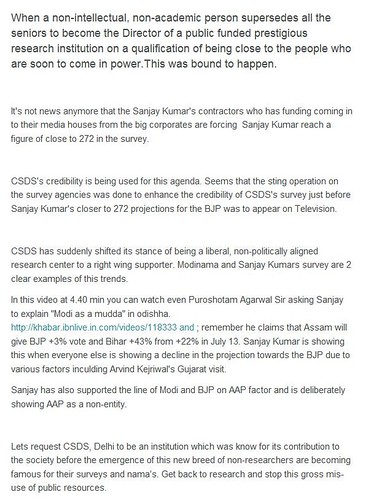 As the Chinese might say, the Indian media is living in strange times even before the advent of Narendra Modi.

The Aam Aadmi Party accuses TV stations of being bought over by Modi. Sting operations reveal that opinion pollsters are willing to up their estimates of Modi for a price.

News channels show unedited feeds from Modi’s own cameras as if they were their own. Editorial changes are being made in newspapers and magazines with a change in government in prospect.

Now, even the Centre for Study of Developing Societies (CSDS) with its formidable reputation as a credible pollster for CNN-IBN, is facing the music.

Yogendra Yadav, for long CSDS’s face on TV during election time, is now a member of AAP, standing from Gurgaon; Madhu Kishwar is a prominent BJP votary, whose interviews with Modi are now being aired on India News and NewsX.

As CNN-IBN (now owned by Mukesh Ambani of Reliance Industries) airs its “Election Tracker“*, a signature campaign has been launched which scurrilously alleges that the CSDS survey is “a campaign for BJP, not research work”.

Launched by “Manjeet Singh” who claims to be from Patna, the petition on change.org headlined “CSDS poll survey for CNN-IBN will take BJP close to 272 in next 3 days. Is this Research?”, reads (uncorrected):

“It’s not news anymore that the Sanjay Kumar‘s contractors who has funding coming in to their media houses from the big corporates are forcing  Sanjay Kumar reach a figure of close to 272 in the survey.

“CSDS’s credibility is being used for this agenda. Seems that the sting operation on the survey agencies was done to enhance the credibility of CSDS’s survey just before Sanjay Kumar’s closer to 272 projections for the BJP was to appear on Television.”

On TV, Congress loses to BJP, Left to AAP

Is “Modi Media” paving the way for soft Fascism?