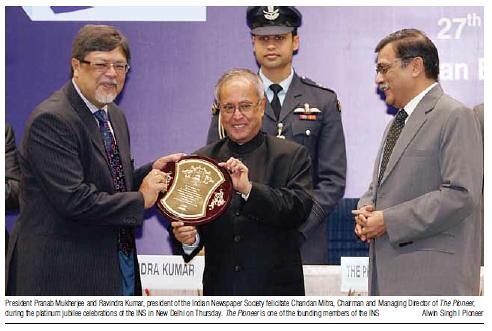 Chandan Mitra, editor-in-chief of The Pioneer, Delhi, is honoured by President Pranab Mukherjee at the INS platinum jubilee celebrations. INS president Ravindra Kumar of The Statesman is at right.

The following is the full text of the speech delivered by the President of India, Pranab Mukherjee, at the inauguration of the platinum jubilee celebrations of the Indian Newspaper Society (INS) in New Delhi on Thursday, 27 February 2014:

“Seventy-five years ago, the world was a very different place. Our country was yet to take its place in the comity of nations. Millions of Indians were engaged in the struggle for freedom.

“Your Society came to life on the eve of World War II.

“Newspapers of the time not only survived the  shortages that war brought in its wake, but also engaged themselves in the difficult task of informing people of the momentous events of a contentious period in our history.

“It took resolve, vision and a sense of destiny on the part of the founding fathers to have formed a Society that could take up issues of common interest for its members.

“INS can also be proud that it helped create and nurture institutions like the Press Trust of India and the Audit Bureau of Circulation.  INS members have played a vital role in nurturing a free Press which is a critical component of our democracy.

“Over the years, INS members have informed society and promoted debate on the important questions that confront our nation.

“Be it the ravages wrought by war or those inflicted by the man-made Bengal Famine, the trials and tribulations of a nation torn asunder by Partition or the building of modern day India, newspapers have played a crucial role in educating Indians and giving expression to the diversity of views in our society, upholding thereby the fundamental right to freedom of speech and expression.

“The plurality of media in our country has its roots in our freedom struggle.

“The Press in India evolved, not through the aegis of the Government but due to the commitment of individuals who used it as a tool to fight enforced opinions and create platform for social reform movements across the country.

“It is matter of pride that between 1780 until India’s Independence in 1947, more than 120 newspapers and periodicals were launched in almost in every Indian language. Each of these publications vowed to carry the ideals of democracy to the doorsteps of the people and spread the message of independence.

“As the media landscape undergoes change, the media has assumed different roles of being a facilitator, protector and enabler of democratic institutions and processes.

“Our vast, varied and vibrant media is a national asset.

“The media as a whole not only keep people informed but also performs a very crucial function of presenting ideas and alternatives in the domain of policy formulation and implementation.  The media space thus becomes an important component in the fabric of a functional democracy by not merely reporting the ‘dialogue of democracy’ but also by taking an active part in that dialogue.

“As India grows in the 21st century, it is extremely important that media reaches out to the inaccessible areas and the under-served population of this country.

“It is critical that the media provides an enabling environment for the spirit of inclusive growth to be ushered in and that the varied tools of communication are able to disseminate the “India Story” in a positive, accurate and focused perspective.

“Even as iconic newspapers and magazines around the world are ceasing to print, our newspaper industry, one of the largest in the world, continues to grow. The market for Indian newspapers, with over 90 million copies in circulation, is expected to grow at a double-digit Compounded Annual Growth Rate of 10% and emerge as the world’s sixth-largest newspaper market by 2017.

“The regional and vernacular print sector, in particular, is growing on the back of rising literacy and low print media penetration as well as the heightened interest of advertisers wanting to leverage these markets.

“Today, according to industry sources, print media has a combined market penetration of only 14%. There is considerable potential, therefore, to expand readership across the national canvas.

“These are changing times and it is not possible for the newspapers to be spared from the consequences of the evolution of ideas and the embrace of technology. It is essential for newspapers to be alive to the challenges of technology, and to harness responsibly the opportunities that present themselves.

“The history of the Press in India bears testimony to the fact that the pioneers created strong and durable institutions as well as traditions.  That is your inheritance and you must build on it. It is incumbent upon you as a Society of newspapers and periodicals to weed out such aberrations as might have crept into the functioning of the media.

“Let me point out in this regard that it is distressing to note that some publications have resorted to “Paid News” and other such marketing strategies to drive their revenues.  There is need for self-correcting mechanisms to check such aberrations.

“The temptation to “dumb down” news should also be resisted.

“The nation faces critical challenges that go well beyond the pressure of ‘Breaking News’ and immediate headlines.

“While you must continue to be effective raconteurs, you must also be visionary nation builders.  You are after all the crystal ball that millions of Indians gaze at. It is your responsibility and your bounden duty to ensure that ideas are debated dispassionately and thoughts articulated without fear or favour so that opinion is always well informed.

“The influence, credibility and quality of our media is well recognized. Newspapers must be keepers of the conscience of our country.  They have to be active participants in our continuing endeavour to nurture a democratic republic committed to achieving justice and fundamental freedoms for all citizens.

“Journalists must bring to public notice the array of ills and deprivations that continue to beset large numbers of our people – be it malnourishment, continuance of discriminatory practices against sections of society, particularly dalits, or the burdens and tragic consequences of indebtedness. They must shape and influence public opinion even as they provide objective and balanced coverage of news.

“The media has an important role to play in cleansing public life.  However, to undertake this role, the conduct of the media itself should be above board.  It must be always kept in mind that ends and means are both important.

“The highest standards  of ethics must be maintained at all times.

“Sensationalism should never become a substitute for objective assessment and truthful reporting.

“Gossip and speculation should not replace hard facts.

“Every effort should be made to ensure that political or commercial interests are not passed off as legitimate and independent opinion.

“Integrity and independence are two sides of the same coin and both must be equally important for our media and for every one of us.  There should be recognition that the media is accountable to its readers and viewers at large and through them to the entire nation.

“As the fourth estate, the media is the mediator between the public and public servants. It is a watchdog of public interest. It gives voice to the downtrodden and dispossessed. It is inherent in the role of a watchdog that the media draws attention to what is wrong. But, gloom and dark alone should not dominate news coverage.  A conscious effort must be made to highlight the positive and inspire change for the better.  The power of the media should be used to engage in a nation-wide endeavour to reset our moral compass.

“I call upon INS and all its members to remain torch bearers of responsible journalism. They must always be a voice for justice and equally, spokespersons of hope and reason.

“In conclusion, let me remind that one of the most prolific and influential journalists as well as publishers of our nation was Mahatma Gandhi. His thoughts on journalism are most illuminating and must guide our media.

“Gandhiji wrote in My Experiments with Truth:

“The sole aim of journalism should be service. The newspaper press is a great power, but just as an unchained torrent of water submerges whole countrysides and devastates crops, even so an uncontrolled pen serves but to destroy. If the control is from without, it proves more poisonous than want of control. It can be profitable only when exercised from within.”

“Week after week I poured out my soul in its columns and expounded the principles and practice of satyagraha as I understood it.  I cannot recall a word in these articles set down without thought or deliberation or a word of conscious exaggeration, or anything merely to please.  Indeed, the journal became for me a training in self-restraint and for friends a medium through which to keep in touch with my thoughts.”