It speaks for the level of distrust that the media has managed to earn for itself that the front page of the Hindi daily Dainik Bhaskar carries an emblem in Hindi (right) alongside the masthead, in the space usually reserved for ear-panel advertisements, proclaiming “No Paid News”.

Two years ago, the Bombay newspaper DNA, in which the Dainik Bhaskar group held a stake (which it later divested in favour of Subhash Chandra‘s Zee) too carried a similar logo.

When The Hindu started printing an edition from Mohali in 2011, its then editor-in-chief N. Ram made a front-page declaration that it would not serve up news that somebody else has paid for”.

Dainik Bhaskar‘s “No Paid News” emblem, however, does not appear in Divya Bhaskar, the Gujarati paper owned by the group.

The paper was in the news last Sunday when it carried a front-page, eight-column flyer-interview by Dhimant Purohit on Sunday, quoting the State’s chief minister Narendra Modi as saying that India’s first prime minister Jawaharlal Nehru had not attended the funeral of home minister Vallabhbhai Patel.

Soon after the clarification, Modi tweeted, “Divya Bhaskar has clarified on a statement about Sardar Patel’s funeral wrongly attributed to me. I thank them for it.” 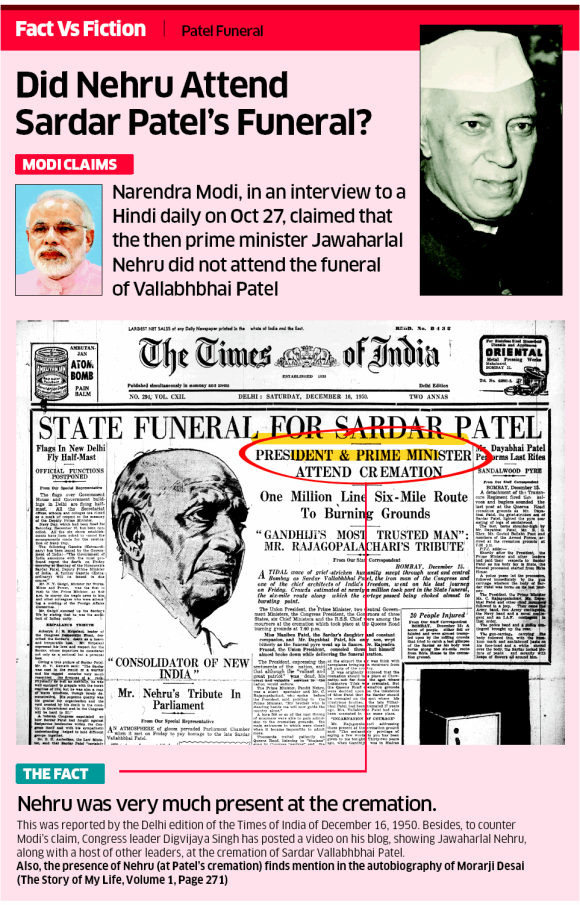 In a simple but smart use of archival material, The Economic Times ran a graphic, containing the front-page of The Times of India, which called Modi’s (and Divya Bhaskar‘s) bluff.

A paper without paid news for North Indians