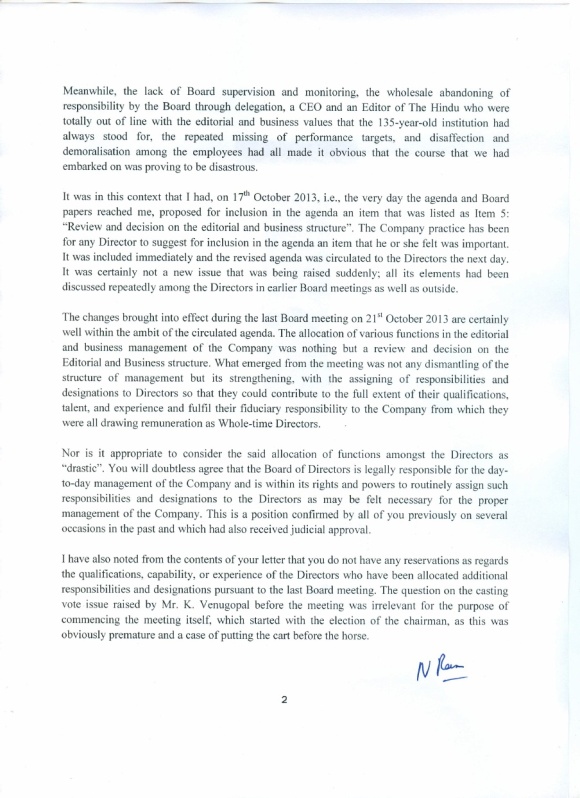 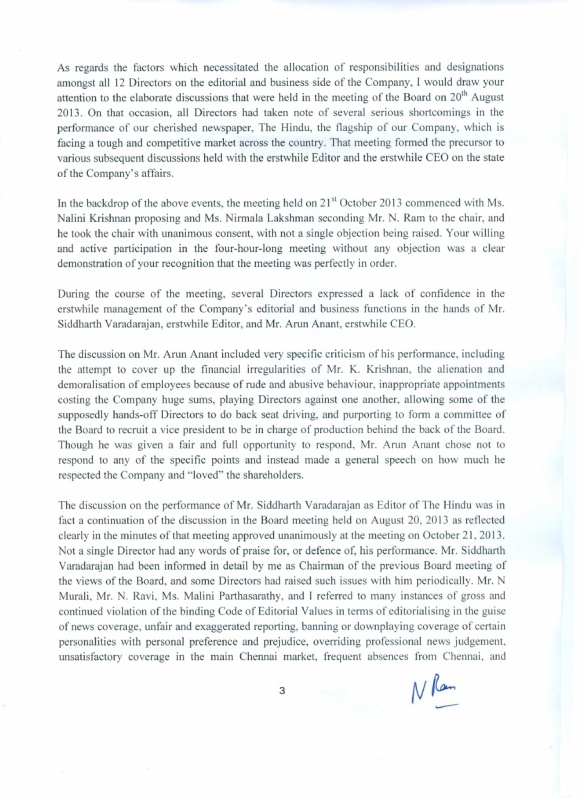 But The Hindu saga is not over yet.

After six board members on the 11-member board of Kasturi & Sons (K. Balaji, K. Venugopal, Ramesh Rangarajan, Lakshmi Srinath, Vijaya Arun and Akhila Vijay Iyengar) wrote to the other five against the removal of Siddharth Varadarajan and Arun Anant, the chairman of the board N. Ram has responded in kind through a seven-page response, with the operative paragraphs on pages 3 and 4.

“The discussions on the performance of Mr Siddharth Varadarajan as Editor of The Hindu was in fact a continuation of the discussions in the Board meeting held on August 20, 2013 as reflected clearly in the minutes of the meeting approved unanimously at the meeting on October 21, 2013. Not a single Director had any words of praise for or defence of his performance. Mr Siddharth Varadarajan had been informed in detail by me as Chairman of the previous meeting Board meeting of the view of the Board and some Directors had raised such issues with him periodically. Mr N. Murali, Mr. N. Ravi, Ms Malini Parthasarathy, and I referred to many instances of gross and continued violation of the binding Code of Editorial Values in terms of editorialising in the guise of news coverage, unfair and exaggerated reporting, banning or downplaying coverage of certain personalities with personal preference and prejudice, overriding professional news judgement, unsatisfactory coverage in the in main Chennai market, frequent absences from Chennai, and inadequate time and commitment to the overall task of editing the newspaper. Some of you wanted these issues address with Mr Siddharth Varadarajan. I pointed out that these issues had been taken up with him repeatedly to no effect and Mr. N Ravi expressed the view that the situation had become irremediable.

“Mr. K. Venugopal made the suggestion at the meeting that the Board should vote on reposing confidence in the then CEO and the erstwhile business and editorial arrangement. I then put the following resolution to vote: “Resolved that the present structure be retained”. Mr K. Venugopal declared that he was voting for his resolution and five others voted in favour. As rightly noted in your letter, six Directors opposed the resolution and the motion consequently failed in the absence of a sufficient majority. It was therefore evident that the erstwhile management structure had become untenable and the Company could not continue to repose trust and confidence in the then Editor and the then CEO. Of necessity and solely with a view to preventing the newspaper’s activities from coming to a grinding half, the managerial supervision of the business and editorial affairs of the Company had perforce to be reorganised.

“It was in this vacuum that I circulated the draft of a resolution of the new structure and allowed the Directors time to go through it before starting discussions on it. The main elements of the proposed structure had been discussed repeatedly in Board meetings as well as outside. Thereafter, discussions on the proposed structure followed with some Directors expressing support and others expressing opposition to it. When the draft resolution assigning that I, in my capacity as Chairman, out of necessity and in the interest of the Company, exercised my casting vote to approve the resolution. Failing this, not only would an unacceptable crisis have arisen in leadership but the very citadel of the newspaper built over more than a century would have been grievously threatened. Such a situation would certainly have been exploited by the Company’s competitors to the obvious disadvantage of the newspaper’s loyal readers. Consequently, the management of the Company who undoubtedly have tremendous experience and credentials in this regard….”

Also read: In family-owned paper, only furniture is fixed

‘The Hindu issue is more complex than you think’