Of all the noxious fumes that emanated from the coal allocation scam that hit UPA-II in 2012, was the perils of political and business interests of media owners and groups, which extend beyond the media.

For, among the impressive list of beneficiaries of “Coalgate” was the name of Vijay Darda, the Congress MP who runs Maharashtra’s largest circulated newspaper Lokmat. 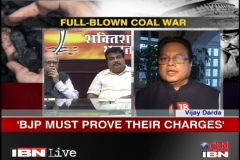 Darda refuted the charges in September 2012, but his son Devendra Darda and nephew Rishi Darda (son of his brother Rajendra Darda, a Congress MLA who is Maharashtra’s education minister) were questioned by the central bureau of investigation (CBI) in November that year.

Vijay Darda himself was interrograted earlier this year. (Shortly after the coal scam hit the ceiling, the Congressman made news for calling the BJP’s Narendra Modi a “lion of Gujarat“).

Now, Lokmat Media is setting up a “Statue of Freedom of Press” at its state-of-the-art printing plant at Butibori in Nagpur. Unveiling the statue on Sunday, October 13, will be the Union home minister, Sushil Kumar Shinde, “in the august presence of dignitaries from different fields”.

Besides Lokmat in Marathi, the group also publishes Lokmat Samachar in Hindi and Lokmat Times in English. It also owns IBN-Lokmat, a Marathi language news channel.

Vijay Darda is a former president of the Indian Newspaper Society (INS).

Also read: From the desk of the hon’ble MP