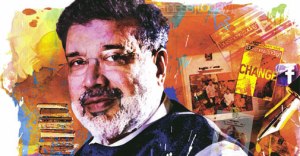 The following is the text of the internal email sent by Aroon Purie, editor-in-chief of the India Today group, to announce the exit of Business Today editor Chaitanya Kalbag.

Like his 2010 letter announcing the exit of the group’s Bombay bulwark Mohini Bhullar, Purie’s letter is remarkable for its civility and graciousness in acknowledging the positive role played by an outgoing colleague.

Am writing this with mixed emotions, since Chaitanya Kalbag has been both a friend and colleague to all of us. CK will be leaving the India Today group at the end of this month.

As most of you know, this was Chaitanya’s second stint with the India Today group. More than 30 years ago he won the group’s first two journalism awards for his investigative and human rights reporting.

Business Today, in particular, has come to be respected for its balanced, investigative and ethical reporting.  Top CEOs, management professionals, and students, in India and overseas, now follow the magazine both in print and online.

Under  Chaitanya’s stewardship there were many significant changes. Some of them were :

# Training and subject matter expertise were encouraged
# Performance appraisals were fact-based and took in 360-degree feedback
# Good reportage, photography and design were recognised and rewarded on a fortnightly basis
#  He revitalized our digital presence

Most importantly, Chaitanya inculcated a daily-news culture, rare in a fortnightly magazine! It’s not a surprise that, with these ingredients, BT stories have regularly won national awards.

CK, on behalf of the India Today group, I wish you well.

Your presence has made a valuable contribution to the Group….