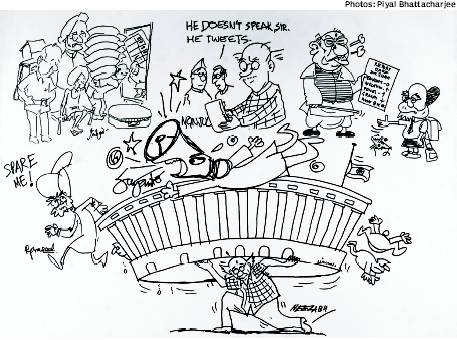 As part of its dodransbicentennial celebrations, The Times of India has published “a cavalcade of cartoons over 175 years”. Titled “Jest in Time“, it is put together by Ajit Ninan, Neelabh Banerjee and Jug Suraiya.

At its launch in New Delhi on Monday, seven well-known cartoonists—Sudhir Tailang from Deccan Chronicle, Manjul from Daily News and Analysis, Keshav from The Hindu, Jayanto from Hindustan Times and R. Prasad from Mail Today—joined hands to produce a cartoon (in picture, above) on the spot.

“Keshav set the tone by drawing the new common man forced to tighten his belt in difficult times. Tailang followed with an illustration showing P.V. Narasimha Rao giving his ‘student’ PM Manmohan Singh a poor report card. Manjul’s version of the common man was one who doesn’t speak but tweets instead!

“Jayanta then drew the laughs by drawing a neta with a loudspeaker as his head “because netas are not doing what they are supposed to; they just keep shouting!” To audience applause, Ninan put the artwork in context by sketching Parliament, and Banerjee gave the final touch by showing the common man holding up the House on his shoulders.”