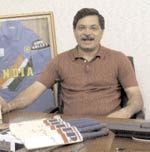 In his weekly column National Interest, Indian Express editor-in-chief Shekhar Gupta writes on a pre-internet era incident from the 1988 Olympic Games at Seoul, which he covered for India Today magazine:

On one sleepless night, after India had had one more disastrous day at those medal-less Olympics, my friend Lokesh Sharma (then reporting for The Telegraph) and I were generally whiling away our time, playing with the computers at the Press Centre.

I was, in fact, playing with a new app (the Koreans had invented one then already!), where you hit an athlete’s name and could check out his/her bio-rhythm on any given date. And then Lokesh came sprinting in, as if he had seen a miracle.

This is just after the Canadian had made history, beating the more fancied Carl Lewis in the 100m sprint. Lokesh had overheard two lab technicians talking about his urine sample having failed the dope test.

We were now sitting on a world scoop.

But at 5.30 in the morning at Seoul (3 am in India) we were past all deadlines and it was no use for me anyway as I worked for a fortnightly, India Today. But Lokesh would always land on his feet. He sold the scoop, his greatest ever, to AFP.

No wonder he soon outgrew sports journalism to rise as India’s most successful sports entrepreneur, a kind of first Indian Jerry Maguire, and has never looked back since.