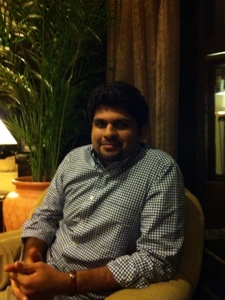 A new son rises in the west. Anant Goenka, the scion of the Indian Express (Bombay) group of Viveck Goenka, and the grandson of Ramnath Goenka, has given an interview to the Mint on the digital future he has envisioned for the paper.

The 27-year-old talks about his father’s superstitions, about growing up in a house in Nariman Point with a press in the basement, of the ravages caused to what was once India’s largest newspaper group by the split in the family in the mid-1990s—and of the fine job done by its current editor-in-chief Shekhar Gupta in restoring some of its lost lustre.

When did you realize you were interested in the newspaper business?

I always loved it. There are photographs of Ramnath-ji taking me to the press at a very young age. The press was in my house, it was in the basement of the Express Towers (in Mumbai), so every night I would always take a walk down with dad or mom.

I’ve always had a lot of love, passion and affection for Express because of the kind of stories that you hear about it, kind of change it’s made with the Emergency stories. It’s too inspiring to be able to walk away from. It’s always been something that I wanted to do….

What kind of relationship do you share with the editor?

I think Shekhar (Gupta) has done a fantastic job with Express.

If you look at the last 13 years, we have had some really rough patches. I think ever since the family fight, and ever since Express was split three ways, it really cost the group. Real estate, what is worth about a billion dollars now, went to Ramnathj-ji’s daughter-in-law, Saroj Goenka. Manoj Kumar Sonthalia, my uncle, got The Indian Express in the south.

We had to let go of Express Towers in Noida. In Delhi, we have been very unlucky. We pay market rent on this building (Express Building on Bahadur Shah Zafar Marg) to Saroj Goenka, dadiji as I call her.

The position that we have today is something that has worked but it also worked because of Shekhar’s complete editorial independence. And he has ruthlessly cut costs. We have come down from 4,000 to 2,400 people.

Also read: The Express journo who broke the chopper scam