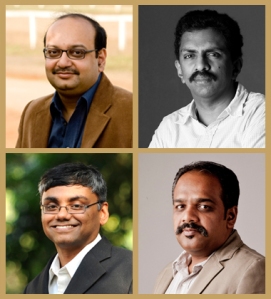 SHARANYA KANVILKAR writes from Bombay: The abrupt exit last week of the top four editorial heads of the business magazine Forbes India, including of its editor Indrajit Gupta, has swung the spotlight once again on the questionable—but rarely ever questioned—human resources (HR) policies and practices in Indian media houses.

In this case, one of India’s biggest: Network 18.

On the face of it, the “termination” of services of Indrajit Gupta, and the “resignation” of managing editor Charles Assisi, director photography Dinesh Krishnan, and executive editor Shishir Prasad, might seem like a small matter—even an “internal” issue—in a company whose 2012 assets were valued at Rs 2,400 crore.

In fact, Network 18’s chief operating officer Ajay Chacko sought to paint the exits as a routine matter; almost a natural consequence of the ongoing “restructuring” in the company after First Post editor R. Jagannathan‘s leadership role was expanded in March to also overlook the print publications in the stable such as Forbes India.

“There were always going to be some redundancies after ‘Jaggi’ took over [as editor-in-chief],” Chacko told Media Nama, after reports of the sudden exits emerged, suggesting that in a converged newsroom, the presence of the four was not required.

However, a closer examination of L’affaire Forbes India, based on multiple off-the-record conversations, reveals the brazen manner in which giant Indian media companies, whose promoters flatulently pontificate on how India must be run, conduct themselves and play around with the lives of their employees and their families.

More importantly, the exits throw not-so-kind light on the pulls and pressures Indian newsrooms are facing due to growing financial pressures; how global brands which franchise their titles are dealt with by their Indian partners; and how the high-stakes game of “valuations” is getting shaped in the digital age.

Above all, that all this should have happened in a business magazine belonging to a company with two business TV channels (CNBC-TV18 and CNBC Awaaz), which is part-owned by India’s most powerful business house, Mukesh Ambani‘s Reliance Industries Limited, provides no small irony.

And that there is so much silence all around from the media fraternity tells its own story. 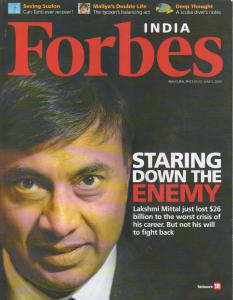 The launch issue of Forbes India, 2009

Insiders at Forbes India, which was launched within four days of the UPA return to power in 2009, say there was little indication of the impending exits of M/s Gupta & Co till as recently as even a fortnight ago.

When the magazine came out with a special double issue to mark its fourth anniversary recently, SMSes and e-mails congratulating each other were being happily exchanged between the editorial and business sides.

But plenty was afoot in the boardroom of Network 18’s Matunga office in central Bombay, where Forbes India staff were now sharing the floor with their First Post colleagues, in the first baby steps towards “integration”—the creation of a combined newsroom where the website’s and magazine’s staffers would happily cohabit under editor-in-chief R. Jagannathan, “Jaggi” as he is known to friends and colleagues.

Indrajit Gupta, Charles Assisi, Dinesh Krishnan and Shishir Prasad, all key founding-members of Forbes India’s launch team, were involved in conversations with the HR side of the company, reminding them on the Employee Stock Options (ESOPs) which they had apparently been promised five years ago when they were being induced to come on board.

The quantum of the combined ESOPs is not known.

Forbes India insiders say it is about Rs 2 crore in all, split between the four; others at Network 18 say it could be a little higher but not exceeding Rs 5 crore. However, unlike in listed companies, Network 18 underwrote the value of the ESOPs. Meaning: it assured the four Forbes India staffers that it would pay the promised money at the end of four years.

Network 18 sources say about a month and a half back, the four Forbes India staffers began the process of cashing out their ESOPs, first informally, then officially.

On Friday, May 24, when they met formally with the company’s HR, they were told to forego their old ESOP scheme and presented with a new ESOP scheme.

They were given a 48-hour deadline to sign up.

However, on Monday, May 27, the HR head Shampa Kochhar, in the presence of Jagannathan, is said to have served editor Indrajit Gupta a fait accompli: resign on the spot by signing a letter that absolved the company of all claims on the five-year-old ESOPs and take a severance cheque. Or have your services terminated.

Indrajit Gupta is believed to have opted for the latter course.

The experience of the other three was no different. 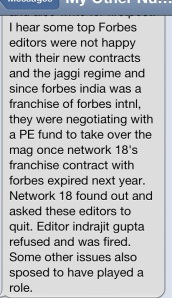 When news of the exits trickled out on Thursday, May 30, it was clear that the dirty tricks department was already at work.

“Forbes editors were negotiating with a PE (private equity) fund to take over the magazine once Network 18’s franchise with Forbes expires next year. Network 18 found out and asked these editors to quit,” read one SMS this reporter has seen.

In truth, though, Network 18’s end-goal of integrating the Forbes India newsroom with the First Post newsroom seems to have been the trigger which sparked the implosion—and the ESOP scheme seems to have come in handy to force the exits.

The less charitable view within Network 18 is that the “old school” Gang of Four sought to cash out their ESOPs because of their reservations over the “integration” plan and that they were always hoping to go out this way and end up as martyrs in the eyes of the world.

# From the Forbes India perspective, integration meant its reporters reacting to breaking business news and writing for First Post, perhaps vice-versa too. It also meant getting used to having an editor-in-chief (Jagannathan) besides the editor (Indrajit Gupta).

# From the First Post perspective, integration meant the domain expertise of an established brand like Forbes India in business stories. It meant access to sources and subjects. It also meant credibility.

# From Network 18 group’s perspective, it meant a larger workforce to feed the “bottomless monster” that is the worldwide web, at no extra cost.

Initially it looked like a win-win, and the indication was that Jagannathan and Gupta were on the same page.

The two had worked together at Business Standard and at a review meeting in April, the former is reported to have said that he would make way for the Forbes India team to run the show after a few months.

Network 18 sources say initially Gupta & Co were not seen as a “hindrance” to the integration, although at least two of the four were allegedly told in their “exit” meetings with HR that they were seen as such and that they would be “redundant” in the converged newsroom.

Since a couple of crores could not have been the problem for either Network 18 or RIL, the key problem area could perhaps have been “mindset”.

The orbits of the two organisations—and their means, methods, motives and motivations—are signficantly different.

On the other hand, First Post is all speed and on-the-spur. Provocation is its middle name. And, despite coming from a massive group backed by a giant business house, much of its output is cheaply spun and rehashed by arm-chair pundits with an “angle” and “attitude”.

More importantly, the political impulses of the two organisations were diametrically different.

Although Forbes prides itself as the “capitalist tool” in America, Forbes India had a slight liberal streak. First Post, on the other hand, like Network 18 founder Raghav Bahl, unabashedly tilts to the right. (Bahl recently said in the presence of Narendra Modi that India’s predominant political impulse was “right”.)

In the end, a low-cost solution seems to have been found to a potentially head-on editorial—and ideological—collision between the online and offline organisations, but at what cost?

Regardless of what prompted the exits, will Forbes, which licensed its title to Bahl’s Network 18 for six years, be told why the top four names on the masthead will be suddenly missing from the next issue?

Will its readers be told?

At the end of the day, though, the issue is one of signals.

By securing the exit of senior editors in this fashion, by showing how dispensable even an Editor is, the signal has gone down the line, to fall in line. Or else.

And by making ESOPs such an elastic matter, other ESOP holders in different companies of Network 18 have been sent the signal that they too can take nothing for granted.

# What signal does the viewer receive at 9 am every week day, when Udayan Mukherjee and Mitali Mukherjee start grandly quizzing TCS, Infosys or Wipro managers on ESOPs?

# What signal do editors across the country receive when the Press Council, Editors’ Guild and other bodies remain silent when media corporations treat employees and their lives with such abandon?

# What signal do media houses send of their concern for a free, fair and responsible press if HR staff behave in an irresponsible manner and attack professional, independent minded journalists?

# What signal does a global brand like Forbes, or other foreign media houses, receive of the seriousness of their Indian partners to play by the book and observe the rules?

# And finally what signal does Mukesh Ambani’s RIL, which is now in the media in a big way, send of the seriousness of corporates to preserve the core values of the media?

Also read: What Raghav Bahl could learn from Samir Jain