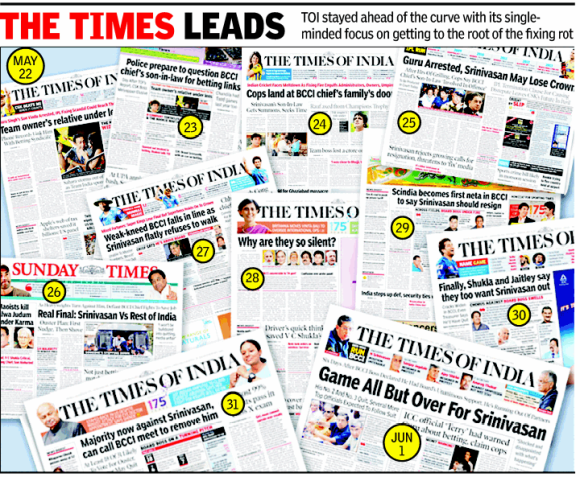 ARVIND SWAMINATHAN writes from Madras: Depending on what you expect of your newspaper, either The Times of India played just the right role in the N. Srinivasan matter: proactively taking up an issue that concerns a “nation of a billion-plus”, right up to the very end, even if it did not secure the end it would have liked.

Or, it plainly overdid it, to the exclusion of all else, eventually falling flat on its face.

Over a 13-day period beginning May 22, ToI ran 87 pieces (outside of general BCCI/IPL pieces) with the BCCI president exclusively in focus and almost all of them either demanding, provoking or predicting the end for Srinivasan following his son-in-law Gurunath Meiyappan‘s arrest in the alleged IPL betting scandal involving Vindoo Dara Singh.

Among these 87 pieces were seven editorials, mini-editorials and opinion pieces, five interviews, and four cartoons.

It even launched a public service advertising campaign (below) midway through the campaign.

ToI‘s hunt for Srinivasan’s head—which even as of today is far removed from the original IPL spotfixing scam involving S. Sreesanth, Ajit Chandila and Ankeet Chavan—began on May 22, the day it launched its “I Lead India” campaign with the poser: “Do you feel you can be a changemaker?”

But it was only on May 28, the day after Srinivasan told a BCCI meeting in Calcutta that he would not resign following his son-in-law’s arrest for his purported involvement in betting, that the ToI coverage took on a more aggressive, advocacy air—eerily reminiscent of the paper’s Commonwealth Games campaign—urging board members, politicians and other sportspersons to speak up or quit to bring pressure on Srinivasan to do the same.

In making the murky BCCI saga its bread, butter, jam and marmalade day after day for 13 days, The Times of India relegated more important but less reader-friendly stories, like the massacre of Congress leaders in Chhattisgarh at the hands of Maoists to the inside pages.

# On May 26, the day after the Chhattisgarh massacre in which 28 people perished, the story was second-lead (as indeed in the Hindustan Times).

# Srinivasan’s fate was the lead ToI story on each of the 13 days; in contrast, the Chhattisgarh ambush found a front-page mention only on four days.

# Altogether, ToI ran 29 stories on Chhattisgarh as opposed to 87 on Srinivasan alone.

# On May 29, ToI rounded up 30 talking heads seeking Srinivasan’s ouster.

The role of Times Now in drumming up the anti-Srinivasan mood is outside of this quantitative analysis, but with Srinivasan only “stepping aside” for a month at the end of all the sound and fury signifying nothing, the newsworthiness of the Times campaign is open to question.

Below are the Times of India‘s 87 headlines, graphics straplines, intros, editorials, mini-editorials, cartoons, interviews involving Srinivasan over the 13-day period.

From Board chief, the silent treatment

BCCI chief may use his clout

Interview: ‘Those at the top in BCCi should resign’: Lalit Modi

Is Srini trying to insulate CSK?

Law catches up with the son-in-law

Srinivasan should quit right away, say voices in the BCCI

Interview: A.C. Muthiah has a go at his arch-enemy

‘I won’t be bulldozed into quitting, media unfair’: Srinivasan

Cricket fans should bat for a change

BCCI prez may manage to stay on

Law will take its course: Board chief on son-in-law Srini meets Meiyappan’s lawyers

IPL needs to cleanse itself from within

Interview: ‘It was a huge mistake to bring Srinivasan into administration’: A.C. Muthiah

Strapline: Chief says he is above board

Editorial: The darkest hour—Srinivasan must quit, followed by the overthrow of cricket’s absentee landlord and revamp of BCCI

Lead story: Why are they silent?

Cartoon: He is taking bets on who’s going to be the first to resign

Strapline: Across fields, Board boss under fire ‘Time for him to go’

Cracks widen in BCCI, even treasurer Ajay Shirke says he would have quit

Strapline: Chorus against Board boss swells

Srini still has the numbers to hang on

May the foes be with you: all the president’s men are fair-weather friends

The endgame has begun

Dalmiya denies he asked Srinivasan not to resign

No one in BCCI asked for his resignation: Shirke

Lead story: Majority now against Srinivasan, can call BCCI meet to remove him

Strapline: Board boss on a turning pitch

How Srini gave himself a life term

Cartoon: I’m going to hang on to this post as long as I want

19 talking heads on which way board meet will go

Lead story: Game all but over for Srinivasan

Six days after BCCI boss declared he had board’s unanimous support, he’s running out of partners His no.2 and no. 3 quit, several more top officials to follow suit

Cartoon: Punchline: The best spot-fixer I’ve seen—he’s so fixed to the spot that no one can get him away from it

Srinivasan wanted Shukla to go too

Advertisement: “To run sports in India you don’t need to be good in games, only in gamesmanship”

Lead story: Match result: all out for no loss

Srinivasan to ‘step aside’: some say it’s a face-saver for him, others call it an anti-climax and a sham

Strap line: Will he really sit it out?

For Srini, a strategic time out

‘Nobody dared ask Srini to quit, only he spoke for first 40 minutes’

Infographic and advertisement: courtesy The Times of India

Also read: The Times of India and Commonwealth Games

107 headlines from TOI on Commonwealth Games

How The Times of India pumped up Team Anna