If our TV stations cannot even put out numbers of their viewership which have a faint whiff of credibility, can they real put out news and views that news consumers can trust and believe?

NewsX, the news channel which has already seen three sets of owners since its launch, is running crawlers on its screens and advertisements on websites, claiming that it was the “most watched English channel” on May 8, when the Karnataka election results came out.

By splicing and dicing TAM data, NewsX manages to show that Times Now was the least watched of the five major English news channel.

On the other hand, Times Now too is running print advertisements of its viewership on results day. Not surprisingly, this shows that Times Now was the most watched, with NewsX not even in the frame. 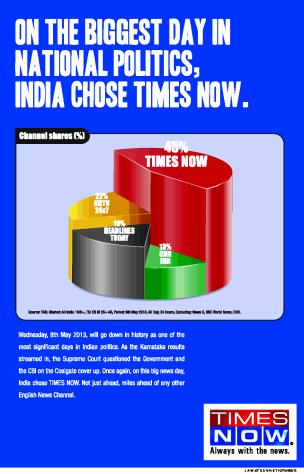 Also read: The most-watched TV news show at 9 pm is…