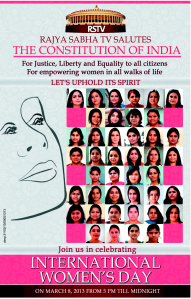 On international women’s day, the newspapers are replete with advertisements and supplements marking the occasion.

Rajya Sabha TV, however, takes the cake with an advertisement (above) in most newspapers that shows the faces of all 42 women employees of the channel, from peon to boss, from reporters to editors (and guest co-ordinators).

“When I was about to launch a Hindi monthly for women, men in charge of the marketing section in a major publishing house explained to me between much clearing of throats and sideways glances that it was fine if I insisted my magazine would not promote Miss India contests but that a good and saleable women’s magazine must not give women disturbing notions about self-worth, etc.

“What women actually want from their magazines, they said, was readable and brightly illustrated material on food, child rearing, knitting, stitching and some romantic fiction. They also confirmed that since over three-quarters of women’s magazines were bought by men (they had better access to the vending joints and liked to vet what the mothers and sisters read at home), the faces on the covers must be fair and female.

“A cover story on rape experienced by girls in middle-class families was bitterly criticised as being fictional. These barbaric things, madam, I was told, happen only in the jhuggi-jhopris, not among people like us.”