Deccan Herald journalist Muthi-ur-Rahman Siddiqui has walked out of the central jail in Bangalore a free man, six months after being named by the city’s police in an alleged Lashkar-e-Toiba plot to target two Kannada journalists and the publisher of the newspaper they were earlier employed in.

Siddiqui had been accused of being the “mastermind” of a gang of 15 in August last year to kill editor Vishweshwar Bhat, columnist Pratap Simha and publisher Vijay Sankeshwar, allegedly for their “right-wing leanings“. The journalists were with Vijaya Karnataka of The Times of India group, before they joined Rajeev Chandrasekhar‘s Kannada Prabha.

The national investigation agency (NIA), which investigated the case, didn’t name Siddiqui in its chargesheet on February 20 following which a special court trying the case ordered his release on February 23.

On Monday night, Siddiqui walked out of jail and on Tuesday, he addressed a press conference.

About six months ago, when he appeared in court for the first time after being named by the Bangalore Police, Siddiqui, 26, still had the glint of youthful exuberance in his eyes.

But now, the first thing that comes to mind on seeing Siddiqui after his release from prison on Monday, is the disappearance of that enthusiasm from his face. Gone is the glint in his eyes, and in its place is a serious, sad man.

Even so, Siddiqui, whose thesis suggestion for his PG diploma in mass communication—‘Media coverage of terrorism suspects’—was struck down by his supervisor pulled no punches in describing his own ordeal before his colleagues, compatriots and competitors. 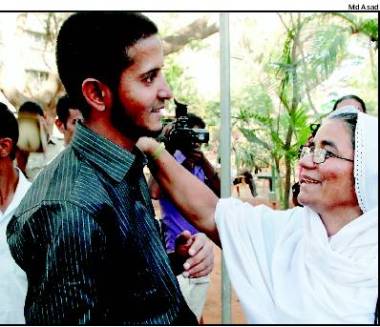 Deccan Herald journalist Muthi-ur-Rahman Siddiqui with a relative at a press conference at the Press Club of Bangalore on Tuesday, 26 February

# “The media has forgotten the ‘A’ in the ABC of Journalism [Accuracy-Brevity-Clarity].”

# “I always thought the police, media and society at large do not treat terror suspects fairly. That thinking has been reinforced by my experience.”

# “Security agencies are not sensitive towards the poor and weaker sections of society. If you look at the way the entire operation was carried out by the police and reported by the media, this insensitivity is clear.”

# “Muslims are often cast by the media and police in stereotypes. There is an institutional bias which manifests in such cases. This is not just about me; it is about hundreds like me who are in jails [across the country] on terror charges. Muslims are not terrorists.”

# “If I was not a Muslim the police wouldn’t have picked me…. They first arrest people, then find evidence against them. What happened on August 29, 2012 was no arrest but downright kidnapping. A bunch of strong men barged into our house and forcefully took us away in their vehicles. This even as we were pleading and asking why we were being taken out.”

# “They kept interrogating me as if I was the mastermind and kept saying that I’d be in for seven years for sure. Everyone knows that jail is no fun place. For the first 30 days we were cramped in a small room. The confinement itself was torture.  They did not inform our families. They did not tell us what we were being arrested for. They made us sign 30-40 blank sheets of paper. One of these papers was used to create fake, back-dated arrest intimation.”

# “Some fair play is still possible in the system. Though justice was delayed, it wasn’t denied in my case.”

Siddiqui, who is still on Deccan Herald‘s roster, says he wants to go back to journalism, for that is his passion, but wants to spend time with his family first.

Two other journalists—Jigna Vora of The Asian Age and S.M.A. Kazmi—have been arrested in recent times on terror charges. They are both out on bail.

Photograph: Journalist Muthi-ur-Rahman Siddiqui at a press conference in Bangalore on 26 February 2013 (courtesy Md. Asad/ The Times of India)